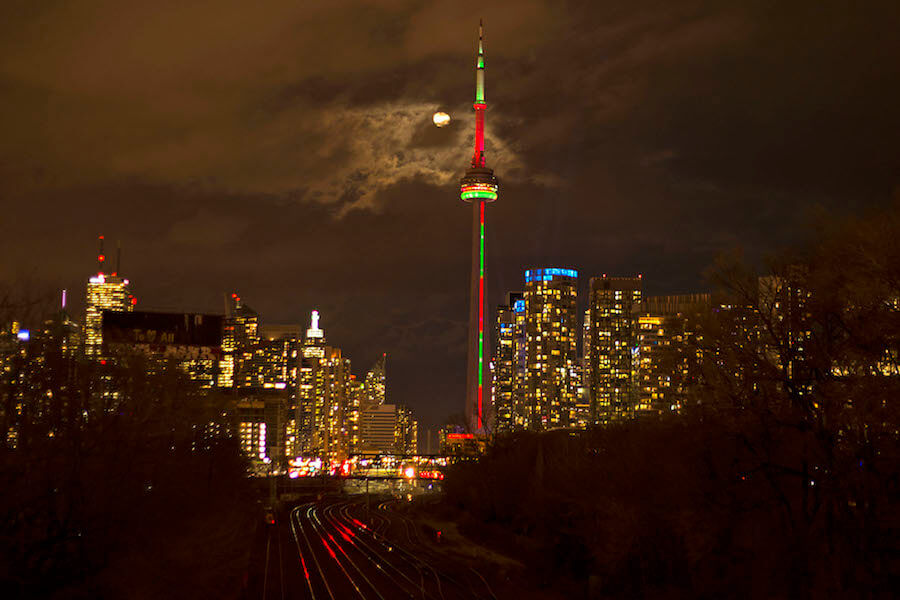 The CN Tower will be offering a free audio-visual light show at midnight.

From Broken Social Scene and Justin Bieber concerts to DJ sets and a CN Tower light show, here are a few ways to say virtual good riddance to 2020 on New Year’s Eve.

For the Underground Festival

Hosted by UPH Collective, this 24-hour Twitch livestream will feature DJ sets and serves as a fundraiser for local music venues Coda Toronto, Vertigo and Above the Wreckage or their partner charities.

If partying is not your thing, tune in to this 24-hour event that will stream movies via Twitch to raise money for Khaleel Seivwright’s Toronto Tiny Shelters. Donations can be made via GoFundMe.

If you’re going to do things virtually, you might as well pick a great vibe from history. This AGO party is a throwback to Studio 54 inspired by the gallery’s (paused, at least for now) exhibition on the legendary New York 70s nightclub. DJ Iced Misto will spin tunes, artist Diana VanderMuelen will do a digital art countdown and expect online or at-home activities from dancing to dessert.

DJ platform Mixcloud has emerged as a go-to for livestream concerts during COVID, hosting excellent shows by Róisín Murphy and Flying Lotus in 2020. The site’s NYE offerings include a livestream from the annual party JD Twitch and JG Wilkes have thrown in Glasgow club Optimo for the past 21 years. The show and broadcasts twice: once for UK viewers and again for the east coast of North America.

If one thing was constant in 2020, it was RuPaul’s Drag Race and its umpteen spin-offs. Superstars from the reality TV juggernaut are hosting an 11-hour, all-night, time zone-spanning NYE party via the platform Sessions Live. Miz Craker and Peppermint are your Eastern Standard Time queens, but expect appearances from Bob the Drag Queen, Trinity The Tuck, Jujubee, Trixie Mattel, Katja and many more. VIP packages abound.

Crow’s Theatre Dinner and a Show

East end Toronto stage Crow’s Theatre has been running its Dinner and a Show series throughout the pandemic, pairing good theatre with good food in your own home. For New Year’s, they’re going in a more musical direction. Local indie rock institution Broken Social Scene will play alongside Ruby Waters, Shantel May and Moscow Apartment. You can just watch the show if you want, or you can order Gare de l’Est’s New Year’s Eve dinner kit along with it. It comes with three courses for two people (including bouef Wellington or celeriac cuit au sel and tarte au chocolat for dessert) and a choice of three wine pairings. The money will help fundraise for Save Hospitality, which will distribute parts of sales to performing artists, hospitality workers and directly to restaurants across Canada.

The Drake: It Was All A Dream

The Drake Hotel will be streaming cover band Dwayne Gretzky’s NYE gig (see below), but is also hosting the warm-up with DJ sets by Cozmic Cat, SOJI and DJ Lucie streaming live (and free) from the Drake Underground. The hotel is also offering meals and cocktails kits – but you have to pre-order those.

Not one Zoom party, but six. Travel between six rooms, including ones playing hip-hop/R&B, reggae/soca, old school jams, dancehall and more. They’ll all have different DJs spinning from different cities, including Edmonton, Calgary and Toronto, where DJ Trambo will be spinning Latin music live from Lula Lounge.

Toronto man-not-currently-about-town Jaymz Bee has cooked up a special New Year’s Eve show on JazzFM. Expect lounge, funk and jazz, some debuts from The Tiki Collective, The Shuffle Demons, Genevieve Marentette, John Finley and more. Bee has pulled out his rolodex for some NYE toasts too, including Weird Al Yankovic, Naboo from the Mighty Boosh and more.

Since 2012, Dwayne Gretzky, the city’s busiest cover band, has never taken a New Year’s off. They live for the un-self-conscious belt-it-out together magic of the night and its songbook, which is something they hope to replicate for the social distancing era. On December 31, they’ll play a free livestream from their huge west end loft. Fans will have the ability to vote for the songs the band will play. Expect at least a couple of Fleetwood Mac tunes.

The Toronto party for LGBTQ+ women and non-binary people is throwing a third-annual NYE bash online. There will be DJ sets, as well as drag performances by Manny Dingo and Gay Jesus, and all proceeds from ticket will go to the Encampment Support Network.

The Biebs isn’t laying low in Stratford this New Year’s. He’ll be playing an “arena-sized” virtual show with a live band, dancers, a big light show and newly-designed stage. It’s not too late.

From Ontario With Love

Maggie’s and Strapped are coming together for another instalment of their virtual strip club. Toronto DJ Ace Dillinger will spin some big tunes and Black, queer dancers will fill your screen all night. A night to support sex workers.

If the classic TV broadcast countdown is your thing, the CBC is airing musical performances from each province and territory in the lead-up to midnight. The festivities are viewable on multiple platforms. Rick Mercer hosts.

The city of Toronto may have cancelled the annual Nathan Phillips Square NYE party, but they’ve got a socially-distant alternative. The CN Tower will be illuminated with a special light show and synced to a musical track simulcast on Jamar’s House Party live on the radio on CHUM1045.

Russell Peters is replicating those great New Year’s Eve laughfests at spots like Massey Hall with a comedy special that will go live one minute after midnight and stay online til the end of January 1, 2021. The special also includes comedians Jason Collings, Crystal Marie Denha, Jeff Joe and Jimmy Shubert.

Update (December 30, 1:20 pm): This story has been updated with details of the CN Tower’s NYE light show.

Correction: An earlier version of this story listed the wrong radio station for the Jaymz Bee New Year’s Eve cocktail party. This story has been updated.