Ontario lifts limits for events, but not everyone is going full capacity

Though venues can now have 100 per cent capacity crowds, some are keeping distance 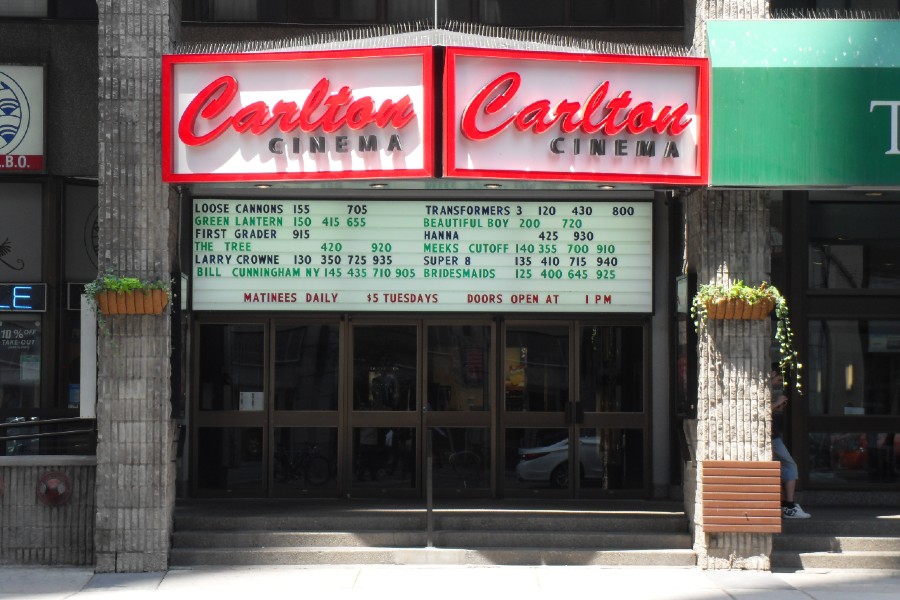 Carlton Cinema is one Toronto venue that will continue to distance seats before going full capacity.

Indoor venues, Health minister Christine Elliott said, would be allowed to operate at full, 100 per cent capacity starting that Saturday – just in time for the return of the Toronto Maple Leafs and Raptors to Scotiabank Arena.

After the first weekend under the new rules, though, it’s clear that full capacity doesn’t necessarily mean full capacity – even with a vaccine passport system.

The speed of the new restrictions – announced at 3 pm and implemented by midnight – meant that many in affected industries, not to mention ticket-holders, were scrambling to figure out what they actually meant.

Over the weekend, Torontonian Andrew Ivimey went to see the new James Bond movie No Time To Die and a Raptors game. He bought the tickets before the capacity increase and felt anxious about going to both events with a full crowd. So he and his fiancée monitored the seating charts for both the screening and arena up until the hour to see how crowded they would be, ultimately deciding to go.

“It was a stressful weekend where regulations were changed and nobody knew what was happening,” he says. “I was stuck in this limbo between checking the venues, ticket sales, and deciding to sell, refund or go.”

A Cineplex spokesperson says they’re reviewing the announcement and has nothing to announce about capacity yet. The ticket purchasing page for a 10 pm screening of The Many Saints Of Newark at Scotiabank Theatre on October 13 shows all tickets available with a one seat buffer between groups (left or right, but not in front or behind).

Imagine Cinema’s Carlton and Market Square theatres wrote on Facebook that they are excited to increase capacity, but will continue to require social distancing and masking (the latter already a requirement for cinemas unless eating or drinking).

Roncesvalles rep cinema the Revue, meanwhile, will continue to cap screenings at 50 per cent until November.

“It was best for us to take a more cautious approach since we have already sold out many October events under the assumption that there would be limited seating with 50 per cent capacity,” programming director Serena Whitney says. “It wouldn’t have been fair to blindside ticket buyers like that. Our community and existing ticket buyers also deserved the heads up cinemas in Ontario weren’t given and we thought it was important to communicate to everyone before we do switch to allowing full capacity screenings in our space again.

“We have an amazing staff and programming team who were all aligned on making this important decision. Giving everyone notice was just the responsible thing to do!”

Full capacity only for seated venues

As we reported last week, full capacity only applies to seated venues, not general admission. So many general admission concert venues are implementing a seating setup – though now they no longer have to distance the chairs.

The Phoenix Concert Theatre recently announced a few concerts, including a special 30th anniversary concert from Sloan on November 29, but owner Lisa Zbitnew tells NOW those shows will definitely not be full capacity.

“Unfortunately, this new plan, once again, didn’t take our sector into consideration,” she says.

“Our capacity is 1,300. We are a GA venue,” she continues. “If we are to add chairs, we drop to 550 maximum, or less than half. This will likely cause most shows on the calendar to cancel, and we will scramble to find last minute programming options. The situation continues to get worse.”

Toronto’s new east end Live Nation venue History, a high-profile collaboration with Drake, was scheduled to open this month. But just hours before the capacity news, the artists booked for October concerts, including Allan Rayman and All Time Low, postponed their shows. Now, the venue’s opening date is unclear.

“The recent announcement around easing of capacity limits pertains to seated concert venues only and does not apply to general admission venues like HISTORY and based on this, HISTORY is not yet able to operate,” said a History spokesperson in an email. “We are hopeful that restrictions will further ease in the coming weeks so we can get back to the concert experience we all know and love.”

The Ontario Ministry of Health has not responded to requests for further comment on the new capacity rules.

As tends to happen when announcements include one sector and not another, gyms and restaurants have also come out in opposition to lopsided reopening plans.

Restaurants are currently allowed to operate at a capacity determined by two metre distance between tables – a plan the Ontario Restaurant Hotel & Motel Association says “leaves restaurants out.”

“We are extremely disappointed and this is not right or fair to a sector that has been suffering for 18 months of COVID-19 hardships and devastation,” said ORHMA president Tony Elenis in a statement. “We were the first to close and continue to suffer with capacity limits and imposed pressure of vaccine passport verification.”

In the meantime, the Toronto Maple Leafs open their NHL regular season tonight at Scotiabank Arena in front of a sold-out crowd of 18,000 people.