Ontario’s outdoor concert and theatre rules are not entirely clear

Step 2 of reopening kicks in today, which means outdoor arts events are back. But there are still a lot of questions. 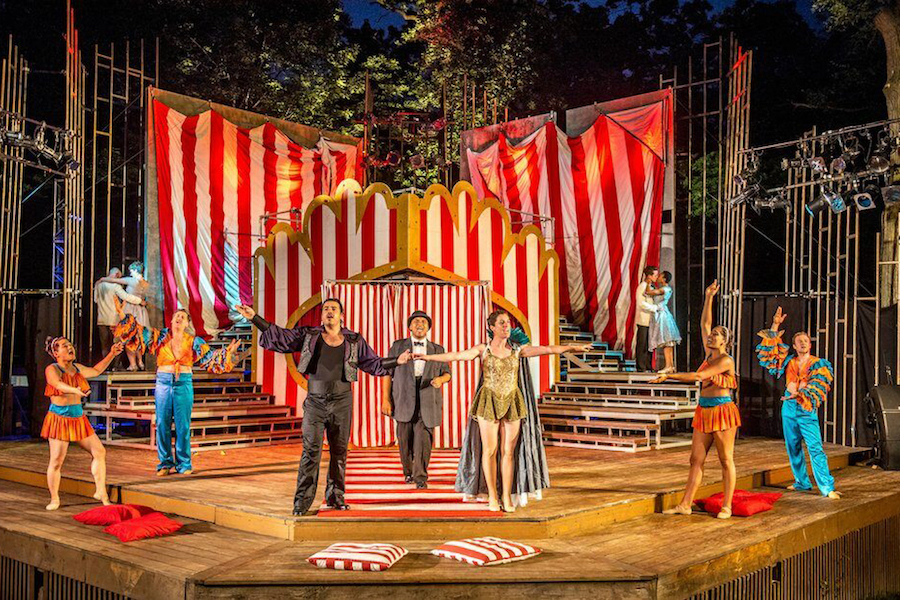 The province enters step 2 of the COVID reopening plan today (June 30), and one of the new allowances is “outdoor concert venues, theatres and cinemas.”

It’s a sigh of relief for some in live arts organizations who have been waiting for the green light to get back in business. But as usual, when the Doug Ford government releases a new reopening guideline, there’s some confusion over what exactly is allowed, and how.

Organizations like the Stratford Festival have had to delay ticket sales to get clarity on how big their audiences could be and what kind of productions they’re allowed to have, so there’s a game of catch-up happening behind-the-scenes as organizers plan outdoor shows.

Here’s what we do know.

What kind of events are allowed?

Most things that you can do outdoors, where the risk of COVID transmission is low, are now allowed.

That means non-contact sports and recreation, camps and camping, outdoor social gatherings and public events for up to 25 people, patio dining for tables of up to six and amusement and water parks (yes, Canada’s Wonderland is reopening).

In-person concerts and cinema have largely been outlawed since we went under lockdown last winter – other than from the comfort of your car.

Now you can step out of your vehicle and enjoy some live music, theatre and movies with other people. Outdoor concerts are allowed, so are stage shows and other theatrical performances, as well as outdoor movie screenings – always a highlight of Toronto summer since long before the pandemic.

How many people can attend an outdoor arts event?

The easy answer is any event – concert, theatre, etc – can happen at 25 per cent capacity.

For permanent outdoor venues like Budweiser Stage, for instance, the capacity is established and determined by seating and ticket limits. (For the record, that would be a capacity of 4,000 – but nothing is announced there yet.)

For seated shows like that, tickets must be reserved or sold in advance. What exactly qualifies as a “reservation” is not entirely clear, but many will use online ticketing or reservation systems – so get familiar with Eventbrite.

What about shows at venues without a fixed capacity?

Here’s where things get a little bit tricky.

It’s easy enough to sell 25 per cent of your usual tickets, but what about the little theatre production in a public square, the cannabis comedy show in the courtyard or the brass band playing in the corner of a park?

Don’t worry, there’s a complicated equation for that.

Just take the total square metres of the outdoor area accessible to the public (i.e. not including the stage and the backstage area, if there is one), then divide that number by 16 (for 16 square metre distances) and round the result down to the nearest whole number.

And if it’s an outdoor venue within another venue, like the stage at Canada’s Wonderland, for instance, it’s 25 per cent of that specific space where the performance is happening.

Those capacity limits also don’t include staff, crew or performers. The 25 per cent or equation-derived cap is just for the audience.

Do you have to be vaccinated or wear a mask?

There has been some speculation about eventual indoor events requiring proof of vaccination, but nothing has been announced yet. Though step 2 was reliant on vaccination numbers, the newly allowed events will not require it.

There isn’t anything specific about masks in the official reopening regulation when it comes to outdoor events. But in a technical briefing for over 700 sector stakeholders last week, Lisa MacLeod, Ontario’s minister of heritage, sport, tourism and culture industries, said masking is not legally required outdoors, but distancing is. “We would still advise that,” she said.

So if you’re going to an outdoor show, be prepared to sit a couple of arms’ lengths away from people.

Does that clear everything up?

If you didn’t already have a calculator out, there are some other questions when it comes to how many people can attend.

Which takes precedence when it comes to capacity: number of seats available, or the mathematical formula? If the formula determines how much space there is for social distancing, does it take into account families or groups that live together? Will venues be required to hire extra security or staff to enforce distancing and capacity?

“This is so open to interpretation, which makes it hard to plan,” says Erin Benjamin, head of the Canadian Live Music Association. “Those inches make a big difference to this sector that’s had such a hard time during the pandemic. Everybody’s space is so unique, and that’s the challenge here. Try as they may to get this right, I’m not sure [the Ontario government] has actual live events people working on these formulas.”

There are also questions about drive-in concerts and movie screenings. Can people attend who don’t have cars? Now that the regulations have changed, can they arrive on bicycles and still enjoy a drive-in show?

Benjamin says she’s been in conversation with stakeholders in music, as well as theatre and cinema (all part of an advocacy campaign called #FairnessForArtsON), and is trying to get some quick answers.

Yes, organizations can once again use indoor venues for pre-recorded and livestream performances and also rehearsals – something that hasn’t been allowed since the last lockdown, much to the chagrin of venue operators.

What outdoor performances are happening this summer?

Now that we’ve gone through what can happen, let’s talk about what will happen.

The city of Toronto said in a release yesterday that they’ve “already issued hundreds of permits for safe outdoor fun.”

These rules were specified without much lead time before step 2 kicked in, so it’s quite possible arts organizers were waiting to proceed – there could be a bunch of announcements coming.

Some of the more robust things we’ve seen announced so far are collaborations between music, film and stage organizations rather than individual events from each. Perhaps working together helps them navigate the late announcements and quick preparation times.

Another big one is Dream In High Park from Canadian Stage, which is going way beyond Shakespeare this year. There are shows listed from July until August ranging from film to theatre, cabaret, dance, storytelling, baroque and chamber concerts, children’s entertainment, concert series from organizations like Small World Music and Lulaworld and a concert from Polaris Prize-winning musician Jeremy Dutcher.

What about indoor events?

If all goes according to plan, step 3 is coming just 21 days after step 2, maybe even sooner – Ford has been speeding up reopening as vaccination rates rise and hospitalizations and COVID cases decline. We’ve already reached the necessary targets.

Full step 3 guidelines have yet to be released, but it’s what many in cinema, theatre and music are looking toward. Many concerts are already booked and tickets are being sold, but no one knows yet exactly what those shows will look like when the time comes or if they’ll have to be reduced or postponed.

Last summer, live music briefly returned with an indoor limit of 50 people – a capacity many venue owners said (and still say) won’t work for them. The fact that step 2’s outdoor event capacity is based on a percentage rather than a specific number is encouraging – that’s what they want for indoor shows too – but clarity is needed ASAP. Concerts and other events take a lot of planning, and they need to start right away.

“The live arts sector has suffered heavy financial losses during the pandemic, with many struggling to pay the bills and keep staff on payroll,” says provincial NDP culture critic and MPP Jill Andrew. “Organizations including theatres, museums, galleries, arts non-profits, charities and grassroots collectives, indoor and outdoor music and cinema venues have been doing their part to follow public health restrictions and adapt how they do things to ensure staff and performers stay safe.

“But organizations need clear guidelines now – including audience capacity and other restrictions – as to what’s allowed for their sector in step 3 of Ontario’s reopening – and they need this in advance of step 3 starting, so they can guide their planning cycles and advanced ticket sales accordingly.”

Fall arts season is coming up, and there is already a lot on the calendar. The clock is ticking.