NOW MagazineCultureOperaAnna Bolena is a great showcase for soprano Sondra Radvanovsky, but not much else

Anna Bolena is a great showcase for soprano Sondra Radvanovsky, but not much else

The meandering libretto is a narrative mess of historically inaccurate melodrama, but the singers come through with regal performances 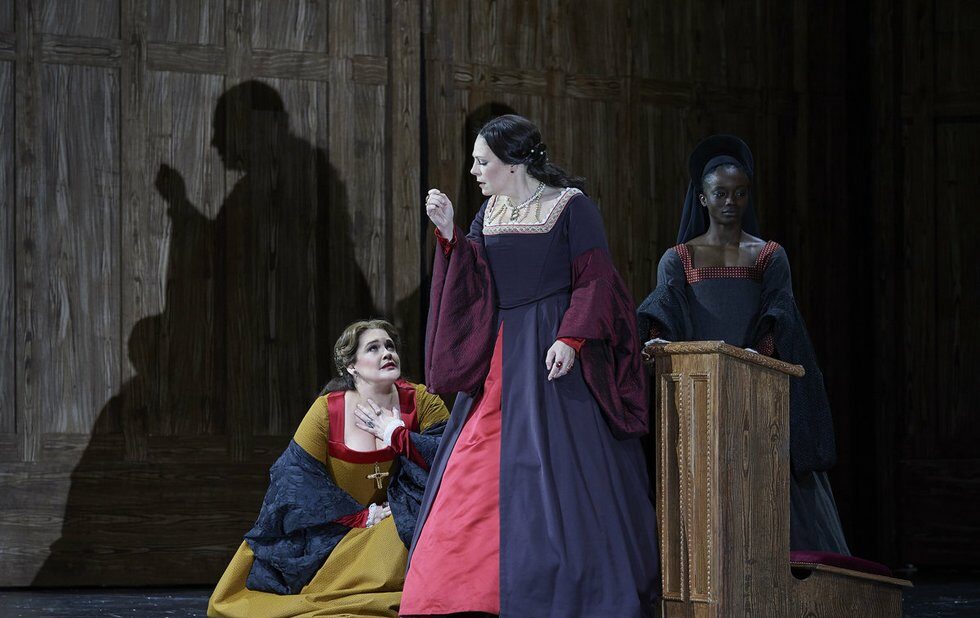 The last time the Canadian Opera Company mounted Donizetti’s Anna Bolena was in 1984 for the legendary Australian soprano Joan Sutherland.

That makes sense. As an opera, it’s no crown jewel. Felice Romani’s libretto, which tells the story of how Henry VIII (Christian Van Horn) manipulates matters with his eponymous second wife (Sondra Radvanovsky), who failed to produce a male heir, to marry the hopefully more fertile Jane Seymour (Keri Alkema), is a narrative mess of historically inaccurate melodrama. Even the score is uneven, filled with arias and scenes that stop and start until the exciting ending.

But as a star vehicle for a singer of exceptional dramatic and vocal ability, it’s understandably popular. And Radvanovsky, who’s already triumphed as one Donizetti Tudor monarch for the COC, nails the queen’s complex emotions in floating pianissimos that pierce the heart and fierce, thrilling runs and high notes.

All of which is impressive, considering that Donizetti and Romani move Anna around the stage haphazardly, now with guilt-ridden lady-in-waiting Jane (Giovanna in Italian), now with abusive, cock-of-the-walk Henry (Enrico), now being serenaded by smitten musician Smeton (Allyson McHardy), now reconsidering her feelings for former fiancé Percy (Bruce Sledge).

The poor woman interacts with many, but we rarely glimpse her character.

Director Stephen Lawless gets some terrific effects from Benoit Durgardyn’s Globe Theatre-inspired set, particularly in the way the chorus of courtiers, beautifully helmed by Sandra Horst, get to gossip and comment on the action. They’re lit by Reinhard Traub for maximum moody intrigue and tension.

Unfortunately, cumbersome scene changes require moving pieces of the mostly wooden set around, and these slow down an opera that already has pacing issues.

Thankfully, the production is saved by the fine singing actors. Van Horn’s booming-voiced Enrico is vain, seductive and swaggering – Lawless often has him lounging on a bed or chair – but also capable of enormous cruelty.

As for Radvanovsky, watching her effortlessly navigate one of Donizetti’s long vocal lines under conductor Corrado Rovaris, you see why she’s one of the reigning voices of this era.