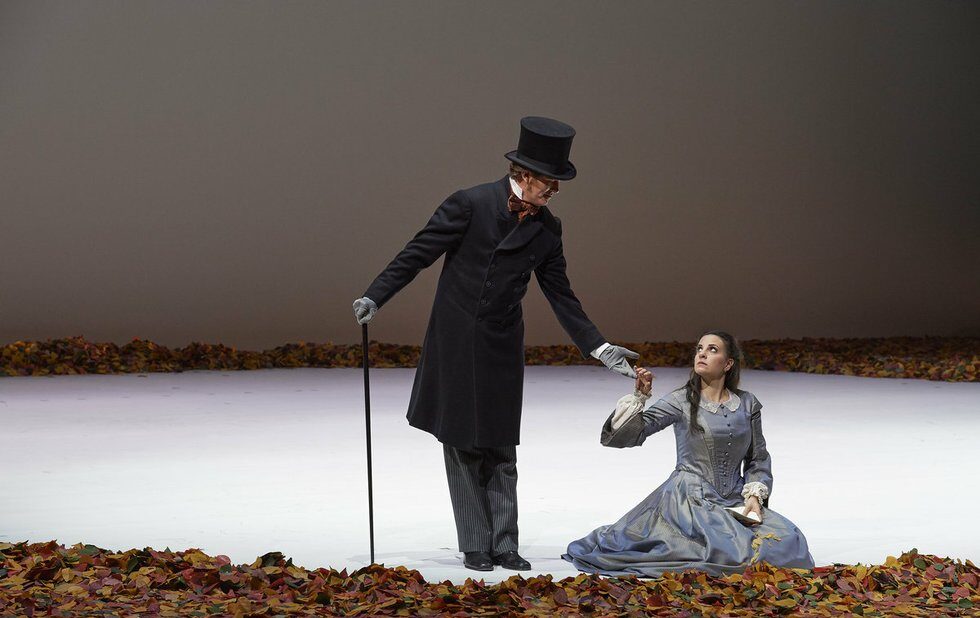 The Canadian dream team of director Robert Carsen and designer Michael Levine take their cue from Tchaikovsky’s score (and the Pushkin poem it’s based on), with its melancholy melodies and themes of lost innocence, dashed dreams and the chilly compromises of adulthood.

The two bathe this production – first seen at New York’s Metropolitan Opera in 1997 – with golden orange hues, at times literally blanketing the stage with fallen leaves.

No spoilers, but the way these leaves are continually rearranged, and the way the lighting palette (originally designed by Jean Kalman, with Christine Binder responsible for the revival) changes to evoke everything from a foggy pre-dawn to an expectation-filled night, adds immensely to the experience of the show.

Pay special attention to Carsen’s use of geometrical shapes to illustrate the opera’s themes of conformity and social order.

All of this enhances the compelling story of naive country girl Tatyana (Joyce El-Khoury) and her unrequited love for her arrogant, aristocratic neighbour Onegin (Gordon Bintner), whose haughtiness causes a rift between him and his friend Lensky (Joseph Kaiser), who’s engaged to Tatyana’s younger sister Olga (Varduhi Abrahamyan).

COC Ensemble grad and star-in-the-making Bintner has a lyrical, rich baritone and a dramatic stage presence, making his anti-hero intentionally ramrod straight and stiff in the first half so his emotional outpourings in the second contrast with real poignancy.

El-Khoury brings lots of believable passion to her role, especially in the opera’s famous letter scene, and characterful mezzos Abrahamyan and Margaret Lattimore (as the siblings’ nanny) will make you look up their résumés in the program to see what they’re doing next.

Conductor Johannes Debus and the COC orchestra wring lots of emotion from the score, whether it’s in the elegiac arias, exciting ballroom waltzes or those urgent, heart-stopping moments of unbridled passion.

This is the perfect show to warm you this season.