Not quite settled but native tale hits some strong notes 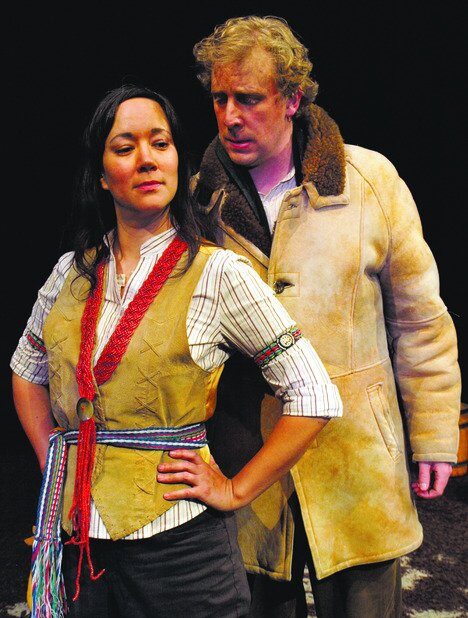 Giiwedin gives us a great operatic hero: a strong woman fighting for her land and heritage.

But it’s the style of the ambitious piece that’s especially striking. Composed by Catherine Magowan and Spy Dénommé-Welch, with a three-language libretto by the latter, Giiwedin (meaning North Wind) blends First Nations and baroque European music in an epic, sometimes surreal look at the choices facing both native residents and European settlers in northern Ontario.

Its central character, Noodin-Kwe, appears in two time periods. In the 1890s, she battles a British minister intent on taming the area by building railroad lines across Noodin-Kwe’s forest. In the 1950s, she’s the victim of another controlling male, an experimenting doctor who takes away her newborn son.

Folklore and fancy make up a large part of Dénommé-Welch’s libretto: human-like wolves and a bear help Noodin-Kwe, while the distraught forest itself becomes the story’s chorus.

The music, played by a continuo quartet led by Gregory Oh, is atmospheric, approachable and occasionally ironic. Maria Lamont’s inventive direction, using both levels of the theatre, reaches a poignant height in the final scene, where Noodin-Kwe (Marion Newman) and her son John (Ryan Allen) suggest the continuation of native tradition.

The singers are also good actors and for the most part project the text clearly. The wolves (Neema Bickersteth and Jessica Lloyd as timber wolves and Nicole Joy-Fraser as their leader, Mahigan) offer some nice comedy, as does the French surveyor Jean (Jesse Clark), whose interest in Noodin-Kwe extends beyond her forest.

But the power-hungry minister with a hidden past (acted by James McLennan, sung by Graham Thomson) isn’t as successful. In his first few scenes, the character is two-dimensional and melodramatic he’s not a worthy opponent for Noodin-Kwe. Only in their final confrontation does the man become a properly dangerous adversary.

You’ll be fascinated, though, by Michelle Ramsay’s wonderful lighting, much of it from below, which suggests both the peaceful forest and the ravages of fire in such a natural world. Her work blends beautifully with Camellia Koo’s set, which alternates between a pine-needle forest floor and a bare white floor for the indoor, “civilized” scenes.[rssbreak]