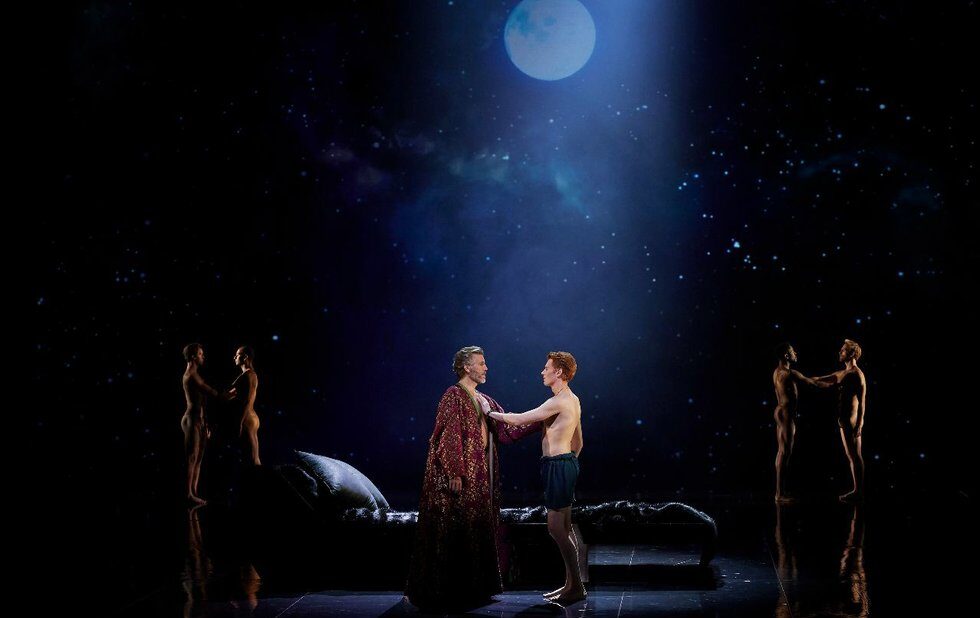 Greek and Roman figures are commonplace in the operatic canon, but rarely do we see two men tearing off their robes, cavorting in bed and making out, while groups of semi-nude men pose seductively on the periphery.

Rufus Wainwrights Hadrian, much more ambitious and uneven than his debut, Prima Donna, seems determined to add an overtly queer story to the art form.

Thats a noble goal, and its refreshing to see a same-sex narrative play out and sing out on the stage of the Four Seasons, but its a shame the work isnt better structured.

The Roman Emperor Hadrian (Thomas Hampson) is ill and grieving the death of his lover Antinous (Isaiah Bell) when hes visited by two deities, Plotina (Karita Mattila) and Trajan (Roger Honeywell), who grant him reenactments of two nights with Antinous if he signs some documents that will destroy the Jews, and hence cut off the rise of monotheism.

The next two acts chronicle those nights one ecstatic, one tragic before Hadrian dies, soon to be followed by the Roman Empire itself (cuz we know how that turns out).

That grand story sounds fine on paper, but Wainwright and librettist Daniel MacIvor fail to inform us of Hadrians importance oh yeah, theres something called Hadrians Wall, isnt there? until the mans final moments.

In most operas, a chorus or secondary character fills in the heros backstory early on and teases out the complications to come.

But in this weirdly paced work directed by Peter Hinton, the nominal male leads Hadrian and his boy toy, who has saved him from being gored by a boar are passive and underdeveloped, while the women around them, particularly Plotina and Hadrians understandably frustrated wife, Sabina (Ambur Braid), upstage them and give voice to their emotions in dramatically vivid music.

Dramatically vivid, but a little incongruous. Plotina, sung by the silvery-toned Mattila, has music that makes her seem like the goddess of the American South.

With that imbalance, and no scene to convince us of the mens love, the tragedy at the centre of the opera feels hollow.

In fact, the opera could almost be called Sabina, since Braid is given the most exciting music and has the biggest character arc in the show. (There are shades of Verdis Amneris to her.)

Braid vaults through the score like an Olympian, her high notes accurate and thrilling, her emotion palpable. (She also looks fabulous in Gillian Gallows sumptuous costumes.)

The score is also uneven. Bell gets a lovely solo in the second act, with an intriguing cascade of sounds rumbling beneath his pure vocal line. An entracte is rhythmically exciting. But the piece lacks a consistent mood or tone.

Theres a decent opera buried beneath the kitsch in the present version. Wainwright and MacIvor need to excavate it and find the heart of the story.