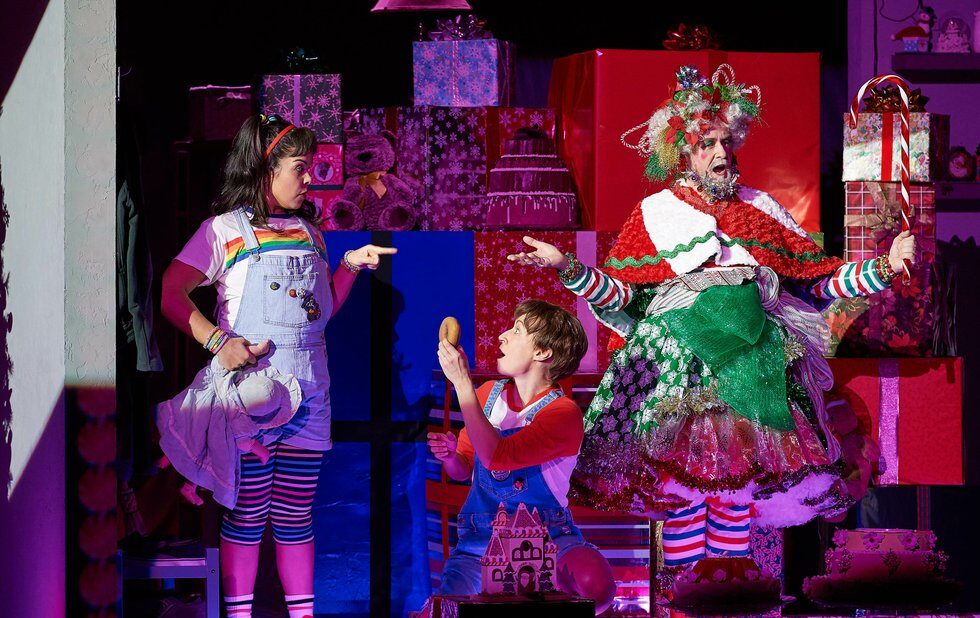 Here’s the thing about fairy tales, whether in their original form or adapted to other mediums: they must be clear.

The Canadian Opera Company’s new Hansel & Gretel starts off with an intriguing, Toronto-centric concept, but soon collapses in incoherence.

Director Joel Ivany’s production opens with a child’s colourful drawing of the earth projected onto a screen. Then we zoom in, Google Earth-style, to Toronto (hey! there’s the very theatre we’re in!), only to pan out and then focus on a single apartment building on the city’s outskirts. Very cool.

In one cramped room, we meet Hansel (Emily Fons) and Gretel (Simone Osborne), who are avoiding their work and trying not to think about their hunger. In walks mom Gertrude (Krisztina Szabó) from her low-paying job (she’s in what looks like a store uniform), criticizing the pair for breaking a milk jug. She sends them off to the forest to pick strawberries.

It’s here that things start to teeter. When father Peter (Russell Braun) comes home from work (he manufactures brooms), drunk and carrying a big basket of food, the parents concoct an elaborate plan to trick their kids. This involves transforming their apartment – and their neighbour’s – into an enchanted space. They also enlist a caretaker (Michael Colvin) to dress up as a witch to scare them.

So, wait. This family that’s barely getting by suddenly has the means to throw a big party involving a Christmas tree (also: is it Christmas?) and a room full of wrapped presents that house tasty treats? And they’re trusting a man they barely know to pretend to abuse their kids?

No wonder the opening night audience wasn’t laughing much. The witch-torturing-children scenes seem like something from a particularly twisted episode of Criminal Minds.

Johannes Debus’s reading of Engelbert Humperdinck’s score is full and rich, as decadent as those cakes the siblings chow down.

Braun has a big, booming voice and presence that’s just right for the extroverted dad. And whether singing or dancing, Fons and Osborne make very convincing children, with the pig-tailed Osborne especially delightful in a sparkling solo at the beginning of the second act. Their prayer scene is enchanting.

Ming Wong’s costumes are simultaneously fun – the overalls H&G wear nod cleverly to German lederhosen – and overly fussy. (Why are the parents in track suits? Why is the witch so garishly made up?)

Likewise, S. Katy Tucker’s sets and projections both delight and confuse. There’s lots of detail in the complex’s various apartments – Hansel and Gretel’s upstairs neighbour, for instance, is a hoarder.

Ivany, who’s done such great work with his own indie opera company Against the Grain, lacks a sense of scale and point of view.