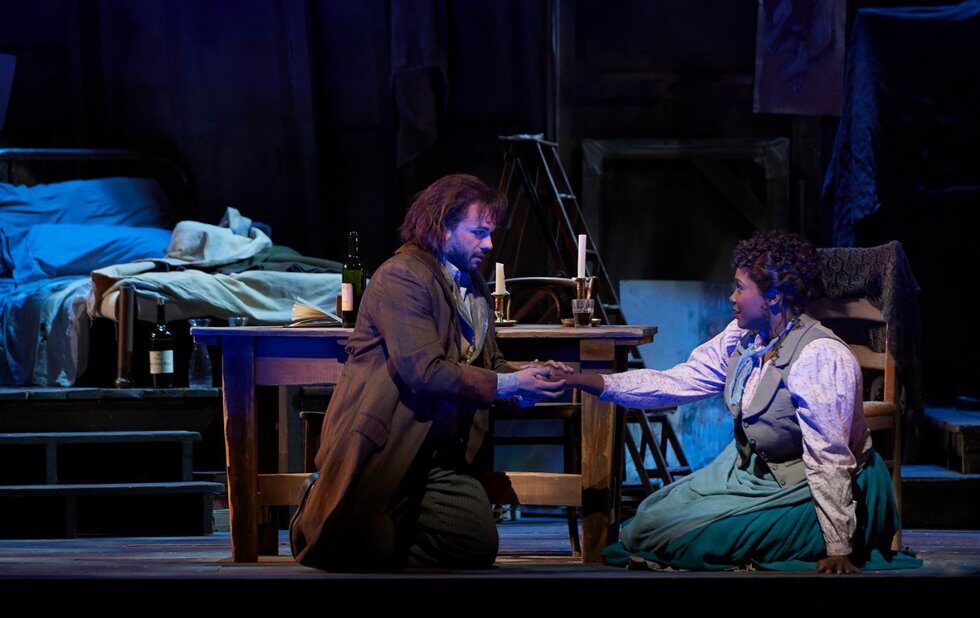 Theres a reason why Puccinis La Boheme remains one of the most enduring operas in the canon.

The story, about a bunch of young Parisians seeking work, love and a way to pay their bills, is timeless (minus the plot line about consumption, of course). The music, from passionate arias to rousing ensemble scenes, is melodic and memorable. And when youve got decent singers and a production that steers clear of any gimmicks, its nearly impossible to go wrong.

Taking its cue from the operas dramatis personae which includes a painter, Marcello (Lucas Meachem) and a poet, Rodolfo (Atalla Ayan) the operas gorgeous sets (by David Farley) make ample use of painted canvases and scrawled notes. And Michael James Clarks lighting is as much psychological as it is naturalistic.

This provides a perfect backdrop for the story about Rodolfos budding romance with neighbouring seamstress/flower maker Mimi (Angel Blue), and Marcellos on-again, off-again relationship with the flirtatious Musetta (Andriana Chuchman).

Director Carter ensures the narrative flows smoothly, the love story blossoms gradually and the fights erupt passionately. One cute addition comes near the end of the first act when Rodolfo, sung with believable ardour (if a small voice) by Ayan, essentially winks at the audience.

Blue makes a more-complex-than-usual Mimi, her voice ravishing in its high notes. Meachems booming, boisterous Marcello is a wonder, while Chuchman effortlessly charms the audience as well as her various suitors.

Paolo Carignanis conducting of the familiar score is spirited and spontaneous, with some brisk tempi moving the action along until the final, moving moments.

If youre new to opera, Boheme is a great place to begin. And if you already love it, this production will remind you why.