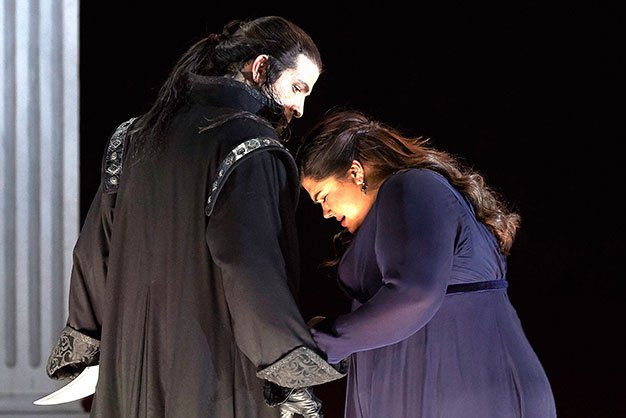 Luca Pisaroni and Leah Crocetto will move you in Maometto II.

Even if you’re an opera fan, you probably know Rossini largely from comic works like The Barber Of Seville or La Cenerentola, his version of Cinderella.

But Rossini succeeds in darker works, too, as the Canadian Opera Company proves with the rarely staged Maometto II. It’s one of the year’s best productions, both in terms of music and staging.

The plot is simple. The title character (Luca Pisaroni), sultan of the Ottomans, has captured Constantinople and plans to invade western Europe by taking the Venetian-held city of Negroponte, defended by Paolo Erisso (Bruce Sledge). Erisso’s daughter, Anna (Leah Crocetto), earlier fell in love with a man she thought was a Corinthian nobleman but was in fact Maometto, and is herself loved by Calbo (Elizabeth DeShong), a Venetian general.

Over the course of the opera, in sumptuous melodies, characters defend their love and political allegiances.

Rossini shapes his portrait of Maometto by not introducing him – though he’s much talked about earlier – until an hour into the work. The imposing Pisaroni, the jewel of this staging, is as eloquent in his recitatives as in fuller musical numbers. What becomes clear is that Anna, though she loves Maometto, is his key antagonist both are uncomfortably caught between the demands of heart and head.

What’s notable about Rossini’s style of composition here is that he includes few stand-alone arias but focuses on the flow from one number to the next. While those set pieces often involve repetition of the text, the outstanding quartet of principals, under the tight conducting of Harry Bicket, deepen their characters’ emotions with each musical variation.

There are a number of outstanding moments, including Anna’s aria Giusto cielo, with harp accompaniment, in the first act, and, in the second, the confrontation between Anna and Maometto the trio with Anna, Erisso and Calbo and Calbo’s bravura aria, Non temer.

Bicket and director David Alden capture the opera’s dramatic tension from the start, stillness rather than movement being key to Alden’s staging. Jon Morrell‘s crumbling, classical-inspired set and costumes and Duane Schuler‘s lighting, which makes good use of shadows, contribute to the handsome production.