>>> Review: The Canadian Opera Company’s superb production of Ariodante has a modern feel 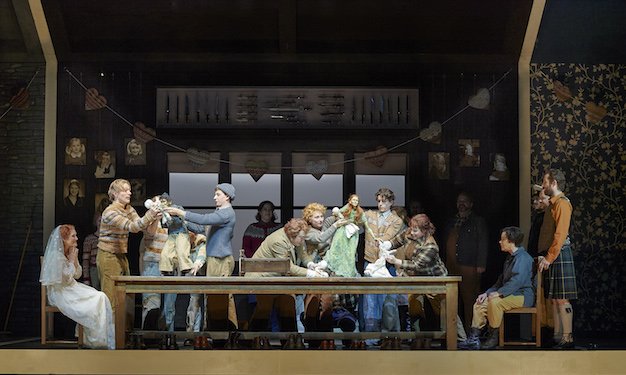 Handel’s rarely performed Ariodante is best known for a few beautiful arias, but in director Richard Jones’s impressive production, it becomes a powerful statement about conservatism, blind love, slut-shaming and the search for self-definition.

The narrative deals with fairy-tale kings, princesses and melancholic heroes, but Jones sets his action on a small Scottish island, its characters simple fisherfolk who follow patriarchal tradition. The only off-islander is the villainous Polinesso, here a secretly lustful preacher who spends the overture “reciting” (through mime and surtitles) misogynistic biblical texts to his congregation.

At the work’s centre are the title character (Alice Coote) and his betrothed, Ginevra (Jane Archibald), daughter of the village’s head (Johannes Weisser). With the help of Ginevra’s servant, Dalinda (Ambur Braid), who is besotted with the preacher, Polinesso (Varduhi Abrahamyan, in another cross-dressing role), sexually craving Ginevra, tricks everyone into believing she is unfaithful to Ariodante.

A secondary romantic story is also a triangle, involving Polinesso, Dalinda and Ariodante’s brother, Lurcanio (Owen McCausland), in love with but rejected by Dalinda, who only has eyes for the preacher.

Thrillingly conducted by Johannes Debus, the Canadian Opera Company production is cast with excellent singing actors they convey their characters’ deep emotions, often expressed through florid music. Coote, Archibald and Braid know how to use Handel’s repeated text to dramatic effect, building more and more emotion into an aria’s repetitions.

The production is full of imaginative surprises. Puppetry interludes (by Finn Caldwell and Nick Barnes) first predict Ariodante and Ginevra’s married life and then offer a less happy future for the mortified Ginevra. There are even comic moments, often involving Polinesso, who when he removes his black preacher’s robe and hat (Abrahmyan’s cackle suggests that the preacher is cousin to the Wicked Witch of the West) resembles a macho, tattooed biker.

The set is a cutaway house with three rooms, designed by ULTZ and lit by Mimi Jordan Sheridan to suggest each scene’s mood. All the concentrated action takes place here, the space intentionally as claustrophobic as the social constraints that inhibit the two female characters, the women both subjected to vicious physical and emotional attacks.

By the evening’s end, one woman gives in to the community’s binding tradition while the other learns that moving on offers the only chance to define and save herself.

It’s a powerful lesson, made even more so by the contrast with the richly beautiful and varied score. A stellar production.