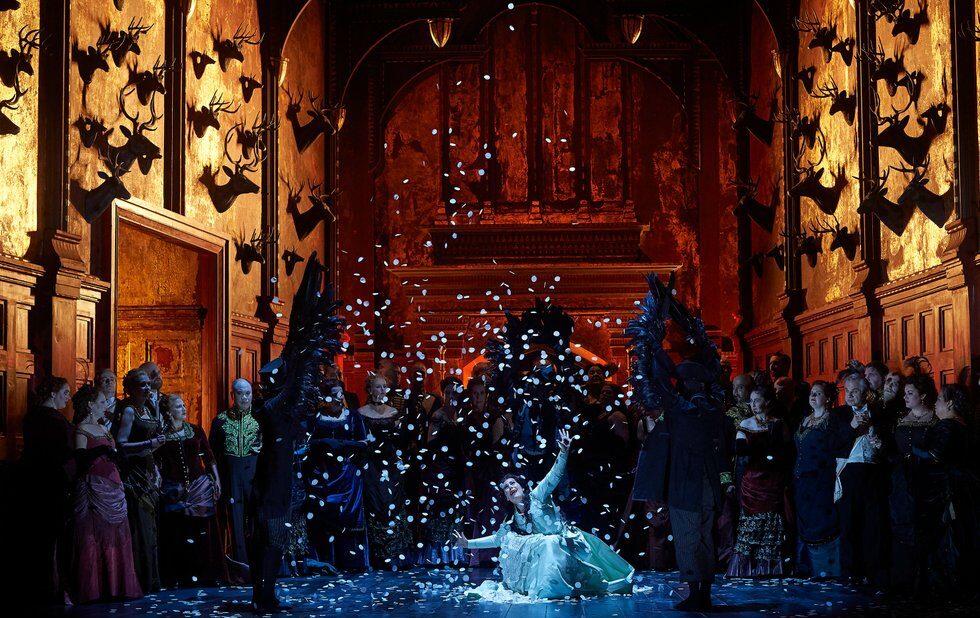 The Canadian Opera Company’s fairy-tale-themed season is proving a wonderful escape from the anxieties of our current political moment. Seeing the good, bad and ugly played out on a stage is much more satisfying than witnessing it on the election trail.

Dvorák’s Rusalka is a variation on Hans Christian Andersen’s Little Mermaid tale, but with a less happy ending than the one we know from the Disney version.

The eponymous water nymph (Sondra Radvanovsky) has fallen in love with a prince (Pavel Cernoch) and longs to become human so they can be together. A pact with the witch Jezibaba (Elena Manistina) gives Rusalka legs and feet but robs her of her voice. And there’s the added proviso that if the prince proves unfaithful both she and he will be eternally damned.

Wait… a soprano with no voice… in an opera? How will that play out? Dvorák and librettist Jaroslav Kvapil solve that situation with a richly entertaining work, and this production’s director David McVicar adds lots of dramatic flair.

Set designer John Macfarlane’s forest and pond look truly enchanting, with trees shifting, mist creeping and the moon – to which Radvanovsky beautifully appeals in the opera’s most well-known aria – appearing like a mysterious, beneficent god.

The contrast between this natural world, populated by capricious wood nymphs (Anna-Sophie Neher, Jamie Groote and Lauren Segal, harmonizing beautifully) and the busy, gossipy world of the prince’s court, is highly effective.

The way McVicar, Macfarlane and lighting designer David Finn connect the two worlds in the second act ballroom scene is inspired. Rusalka’s reaction to her environment – from the animal trophies adorning the walls to the court-hired ballet dancers, whom she mistakes for creatures from her own watery world – adds convincing notes of realism to the tale.

And there are even clever spins on that hoary old fairy-tale cliché, the wicked witch.

The cast consists of many otherworldly talents. Stefan Kocán’s Vodnik, Rusalka’s forlorn father, is stern yet sympathetic, his resonant bass haunting the production. Manistina has great cackling fun as the witch. Cernoch’s pure but slightly underpowered tenor is just right for the fickle prince, and Keri Alkema, Lauren Eberwein and Matthew Cairns are memorable in their scenes as the Foreign Princess, the Turnspit and a Gamekeeper.

Radvanovsky proves yet again she’s one of the best singing actors of our time. Her voice has a silvery lustre that contains delicacy, power and accuracy.  Even when she’s not singing, she’s magnetic. And the physical demands of the role, especially in the third act, are huge.

Conductor Johannes Debus and the COC orchestra make Dvorák’s score shimmer and sparkle, adding to the dream-like feel of the experience.