THE MAN WHO MARRIED HIMSELF by Juliet Palmer and Anna Chatterton (Toronto Masque Theatre). March 10-11. Rating: NNNNTalk about taking. 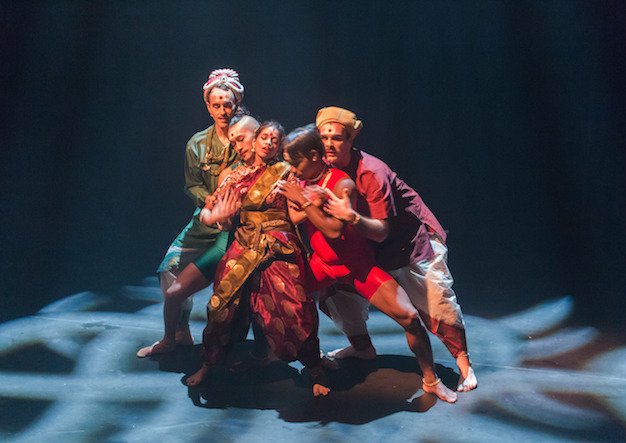 Talk about taking self-love to the extreme.

In Toronto Masque Theatres The Man Who Married Himself, with music by Juliet Palmer and libretto by Anna Chatterton, an egotistical prince (countertenor Scott Belluz), is pushed toward marriage but believes that a wife cant be controlled.

He has another solution: he splits his body in two and creates the newborn woman, (Susha, who specializes in the Carnatic music of southern India), whom he sees as an image of himself that he can dominate.

Well, no. He worships the woman and places her in a penthouse suite to secure her for himself. (Though based on a southern Indian folktale, the story has a contemporary urban setting.) But the woman seeks her other half…and its not the prince.

From her window she sees a man (jazz improviser Alex Samaras) on the street, who becomes her lover, forced to disguise himself as a snake. When the prince discovers the reptile, he has it killed and flung back to the street. In despair, the woman offers the prince a riddle to solve whether or not the prince guesses the solution, the future spells tragedy for the pair.

Directed by Marie-Nathalie Lacoursiere, the hour-long production is a theatrical and visual treat. The singers are first-rate, but what makes this show special is the inclusion of a pair of dancers (Jelani Ade-Lam and Sze-Yang Ade-Lam, partners offstage as well as onstage) who explore the narratives inherent gender fluidity. Performing Hari Krishnans sensual choreography, they offer a fascinating subtext to the story, contributing to the narrative (they also play the old woman who acts as go-between for the woman and the lover) as well as its emotional content.

Palmers shimmering music, conducted by Larry Beckwith and scored for baroque flute, strings and percussion, is haunting, while Chattertons feminist libretto, poetic and humorous, matches it seamlessly. Musical highlights include the duet for the lover and the woman, with its rippling, intertwined vocal lines of mutual seduction, and the lovers funeral.

The design by Rex (costumes) and Gabriel Cropley (lighting) is also powerful, adding to the productions magic.

Too bad this blend of music, dance and text typical of the work of Toronto Masque Theatre only had three performances. It deserves more life.