NOW MagazineCultureOperaThe Overcoat: I prefer the original theatrical garment to the knock-off

The Overcoat: I prefer the original theatrical garment to the knock-off 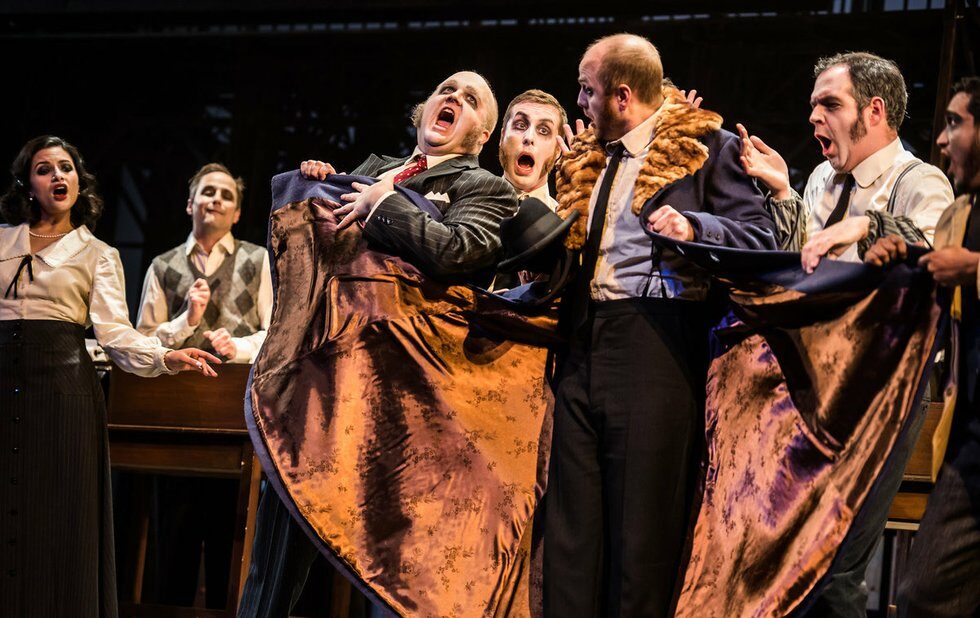 Canadian Stage and Tapestry Opera’s new operatic adaptation of The Overcoat is subtitled “a musical tailoring,” but I must admit: I prefer the original theatrical garment to the knock-off.

By contrast, this new version, with a libretto and direction by Panych and a score by James Rolfe, adds some new notes to the story about a lowly clerk, Akakiy (Geoffrey Sirett), who’s ridiculed for his threadbare outerwear until he saves his kopeks to buy a life-transforming new coat, which leads to his downfall. But the changes don’t always pay off.

For instance, Panych has given Akakiy an obsession with numbers that fails to serve as an appropriate overarching metaphor. And the presence of a “mad chorus” of three figures who seem to haunt Akakiy in his bleak rooming house room is never explained. Is Akakiy mad from the start? It’s never clear.

But Panych and Rolfe have written some effective scenes to flesh out Akakiy’s world, particularly in a repeated sequence about how men behave boorishly when they’re together. And they’ve given a juicy double role to baritone Peter McGillivray, who excels as both Akakiy’s bombastic boss and the drunken tailor Petrovich. (Erica Iris Huang is delightful as Petrovich’s knowing wife.)

What doesn’t work so well is Panych’s libretto, which is filled with distracting, jokey, forced rhymes like “cuff/snuff” and “cabbage soup/good for croup.” This latter is sung to Akakiy by his landlady (Andrea Ludwig), whose aria about the superficiality of appearances would be better served in act one and not two. And by the way: isn’t croup a disease that mostly affects children?

Rolfe’s score is jaunty and energetic, if a little too on the nose. The best music is written when Akakiy has his coat stolen (you knew that was coming, didn’t you?) and the strings shriek anxiously as the man desperately looks for it. There’s also a clever mash-up of Bach and Beethoven in a climactic moment.

Ken MacDonald’s set seems like a scaled-back version of his original, and Alan Brodie’s lighting helps create mood and atmosphere.

But the work’s finest moments – a sudden snowfall, the appearance of another garment at the end and the anthropomorphism of the overcoat itself – all hail from the original show.

Sometimes things don’t need to be altered, after all.