She didn't intend on selling face masks or even being an artist, but Nadia Lloyd won both of those categories with our readers 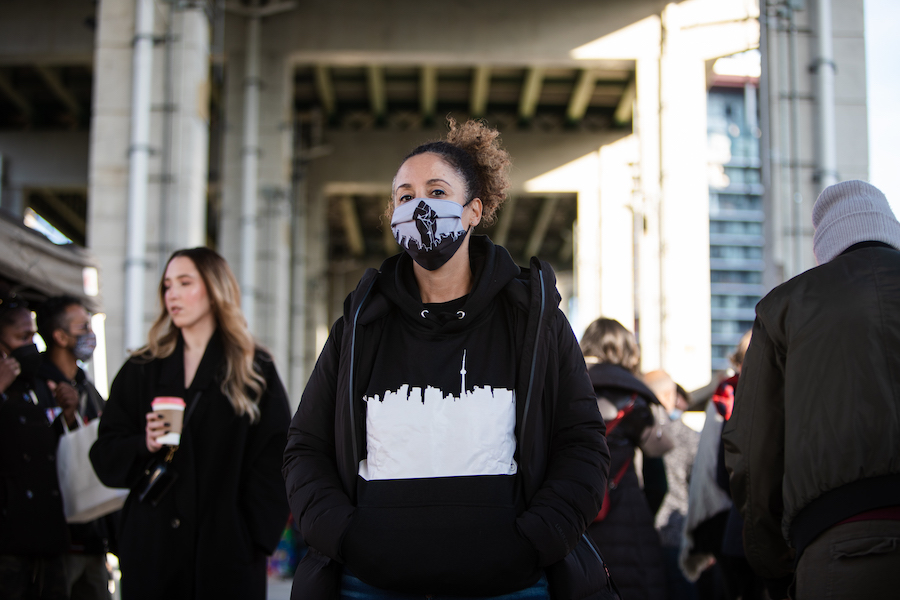 Last summer, during the throes of the pandemic, Nadia Lloyd designed face masks where a clenched fist rose above the silhouette of the Toronto skyline. With every sale of that spare and pointed mask, $5 went to Black Lives Matter-Toronto. Sales blew up after Toronto Raptors coach Nick Nurse and point guard Fred VanVleet were photographed wearing the design, helping Lloyd raise $12,000 and counting for BLM-TO.

Lloyd’s BLM face mask – along with a Pride design featuring the city skyline splashed across a rainbow, which was worn by Mayor John Tory – introduced audiences to the rest of her work. There’s a reason our audience helped her win both Best Local Face Mask Designer and Best Local Artist in this year’s Readers’ Choice, recognizing the work she puts into canvases, hoodies and cushion covers. She renders Toronto skylines in neon or Crayola brushstrokes, or pours her emotions onto abstract paintings bursting with colour.

Her work can be purchased online, with some items available at the Art Gallery of Ontario gift store, but for almost a decade the self-taught artist, designer and event creator was getting her name around as the creator of the Toronto Art Crawl, which hosts anywhere between 50 to 100 plus artists several times a year. The most recent Toronto Art Crawl, a Christmas market, was held at the Bentway last weekend.

“My bread and butter are events and my art and design was my passion,” Lloyd tells NOW, describing life in the before times, when she never imagined she would be making face masks. “Just like any other artist, I was still very much hustling.”

Lloyd also found a rather circuitous way into art. She had a previous life as a fitness trainer, owning and operating East York gym TheWorkoutLoft for four years before she sold it in 2010. She had no designs on being an artist, but her husband at the time encouraged her to explore her creative side. He went out and bought a bunch of art supplies, as if for himself, and just laid them out on the dining room table, leaving them there for weeks before Lloyd worked up a curious inkling to pick up a brush. “Within six months I was selling my art,” she recalls.

The unintentional artist also became an unintentional face mask designer. She began making masks initially for herself, since the ones she ordered on Amazon in March 2020 were going to take weeks to arrive due to supply issues. Lloyd and her son cut up cushion coverings featuring her Toronto skyline art and sewed them into masks. They posted selfies on social media with their new coverings and immediately got requests from people asking how they could buy them. “I was like, ‘What are you talking about? I’m not in the face mask business. This is just for fun. Don’t worry, the pandemic will be over in a week.’”

But she was also flooded with emails from doctors and nurses who needed fabric face masks to wear over their N95s – they were being told they would have to recycle the coveted PPE. Lloyd started making 40-100 masks a week to donate to hospitals. But by the end of April 2020, she realized she needed to subsidize the production. That’s when she banked on the demand from social media and started selling her designs for $25 each, with every purchase including a mask donated to frontline workers.

Lloyd introduced the BLM mask after a heavy conversation with her son following George Floyd’s murder, reckoning with racism and trauma. They wanted to open up the conversation further. One of the BLM masks that Nurse purchased is now on display at the Royal Ontario Museum’s Unmasking The Pandemic exhibit. This past summer, Lloyd added an Every Child Matters collection, where 100 per cent of the proceeds are donated to the Indian Residential Survivors Society.

While the Ontario government is planning to lift masking protocols next spring, Lloyd doesn’t plan to ditch her accidental new calling.

“From the feedback I’ve received from my clients, they will most likely continue to wear masks for years to come,” she says. “I expect things will probably get somewhat back to normal but I have a feeling I’ll always have face masks on my website and there will always be an audience for them.”