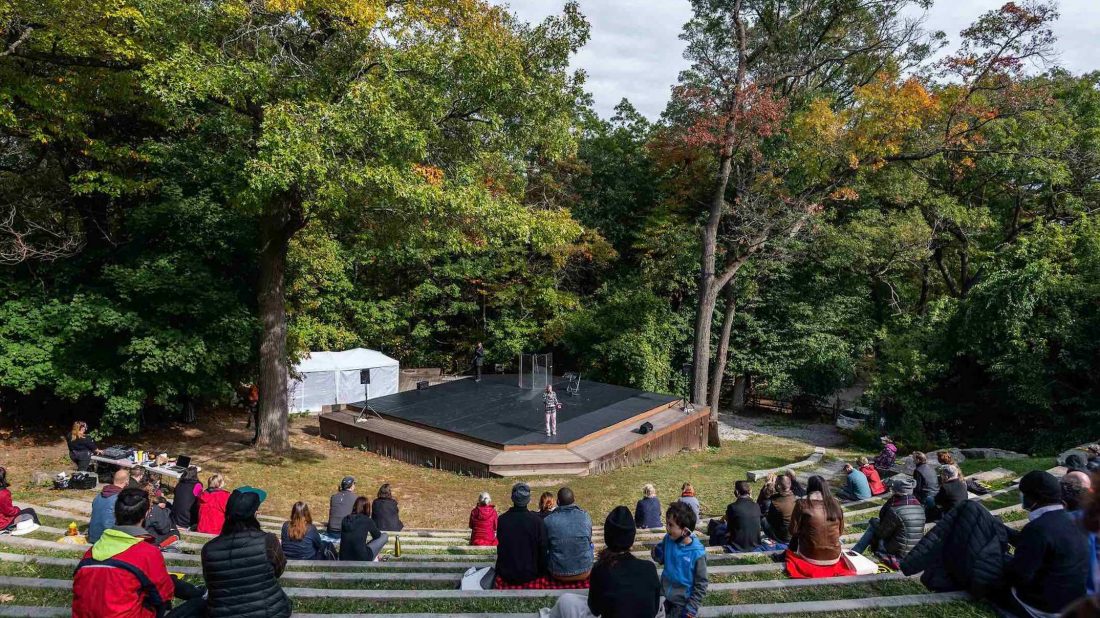 For the thousands who attended live shows in the summer, Canadian Stage’s Dream In High Park series lived up to its name. After nearly a year-and-a-half without live, in-person performances, it really was a dream come true to see plays, dance shows, concerts, comedy shows, musicals and more in the beloved High Park Amphitheatre.

Surrounded by a canopy of ancient trees, with the bonus of birds adding their song to whatever was onstage, arts companies like Storytelling Toronto, Tapestry Opera, Musical Stage Company and Native Earth Performing Arts performed to physically distanced groups that got larger by summer’s end. The result was the gradual return to some sort of normalcy. As ever, the seating wasn’t the most comfortable – it helped to bring a blanket and pillows. But it sure beat sitting at home and binging on Netflix.

Originally created for the Isolation Short Film Festival and expanded into a series of three-minute Facebook videos, Colleen Curran’s comedy stars Debra Hale as Kitty, a Toronto do-gooder phoning the older Bernice (Lorna Wilson) to check in on her during lockdown. It’s fun to watch the show grow more ambitious over the course of 20 episodes as Curran and her cast figure out what they can and can’t pull off, and the cranky, kibitzing tone feels very relatable at this particular point in time.

Whether you’re in the mood for stand-up, sketch, improv or some combination of the above, perennial Readers’ Choice winner Comedy Bar will have a show for you. It’s basically a one-stop shop for big laughs. No wonder it was the first comedy venue to safely reopen. This time next year, it could be competing against its sister venue, Comedy Bar Danforth (set to open in early December), for the top spot. Perhaps by then the bar area will be the schmoozefest and after-hours hangout it always was pre-pandemic.

How appropriate that the National should win this year – it’s former artistic director Karen Kain’s final programmed season (she’s continuing as artistic director emerita) and contains a mix of classic chestnuts (The Nutcracker), bold modern works (Angels’ Atlas and Serenade, currently on until November 21) and the world premiere of Kain’s own restaging of Swan Lake (June 10-26, 2022), which was postponed because of the pandemic. Incoming artistic director Hope Muir takes over in January, and, after dark theatres for nearly two years, she’s sure to take some bold programming steps.

Randolph College for the Performing Arts

Drive-in theatres were a dying breed until the pandemic made them one of the few safe ways to watch movies with a crowd – and Ontario Place made excellent use of its relatively remote location, erecting a screen on the complex’s East Island to show classics and host special film-festival events. After special Halloween events built around Goosebumps and Scream, the space is being used for Snow Magic, an immersive drive-through holiday event running through January 2021.

Even at 50-per-cent capacity, the Toronto International Film Festival remains a force to be reckoned with, screening projects from globally revered artists like Jane Campion and Apichatpong Weerasethakul while also throwing red carpet and awards galas for the likes of Benedict Cumberbatch, Jessica Chastain and Dionne Warwick. It made us briefly believe normal life might be inching back, even though most of us were still experiencing TIFF’s programming at home.

Your choice for four straight years, the beloved Roncy picture house – originally opened in 1912 and reinvented as a nonprofit, community-driven operation in 2007 – resumed operation just before Labour Day, putting beloved series like Drunken Cinema, Designing The Movies and Anime! At The Revue back in front of audiences starving for cinematic communion. And they’re experimenting with some new ideas as well, like (Not-So) Terrible Twos, which revisits sequels such as the sans-Schwarzenegger Predator 2 to see whether they’re secret triumphs.

She might not have been victorious on Canada’s Drag Race, but the trailblazing choreo-queen is everywhere, kicking her way from gay club stages to billboards. Aside from gracing the cover of NOW earlier this year, Tynomi Banks kept spirits (and legs) high hosting a monthly drive-in show this summer and has launched her own merch line to benefit Black Lives Matter. By the time you read this, she’ll be in the midst of a UK live tour. No big D.

Since live theatre was one of the hardest hit sectors during the pandemic, the reopening of big venues this fall and winter like the Princess of Wales, the Royal Alex, the Ed Mirvish and the CAA Theatre – all of which feature Mirvish shows – will be a cause for celebration. Mirvish produces blockbusters like Harry Potter And The Cursed Child – featuring an all-Canadian cast – and homegrown hit musical Come From Away, but also gives audiences the chance to see edgier fare in its off-Mirvish subscription series, which this year includes Jake Epstein’s autobiographical solo show about his musical theatre dreams, Boy Falls From The Sky, a sold-out hit at Fringe 2019.

In less than a decade, this tiny east-end company has transformed the independent theatre scene with its bold, intelligent productions of small-to-medium scale international plays like The Motherfucker With The Hat, The Aliens, Superior Donuts, The Nether, The Father and Marjorie Prime. The latter showcases what makes Coal Mine so special; it featured one of the last local performances by Martha Henry. No wonder its productions always sell out. The company is currently readying its seventh season, which will likely be fresher and more exciting than companies with five times its budget.

The words “immersive” and “site-specific” are overused these days, but Outside the March earns them. With award-winning productions like The Flick, which recreated an old movie theatre, and The Tape Escape, set in an old video store, the company has created unforgettable theatre experiences where the setting and design are an integral part of a play’s meaning.

During the pandemic, they made international headlines with their phone-based show The Ministry Of Mundane Mysteries, and their current film version of James Smith’s fascinating Lessons In Temperament, was filmed in empty theatre spaces throughout the province. That’s thinking outside the box.

This is the third year NOW’s readers have chosen Netflix as their favourite streaming service, and at this point it’s not really surprising; the ubiquitous streamer has basically been an essential service for the last year and a half, offering a flood of movies and shows to help us wait out the pandemic. (Put your Squid Game costume away, there’s a new Tiger King docu-series!) And if you don’t spend at least an hour clicking through the tiles before falling asleep without having watched anything, have you even experienced modern life?