NOW MagazineCultureTheatreReview: Adaptation of The Changeling channels the originals blood and violence

Review: Adaptation of The Changeling channels the originals blood and violence 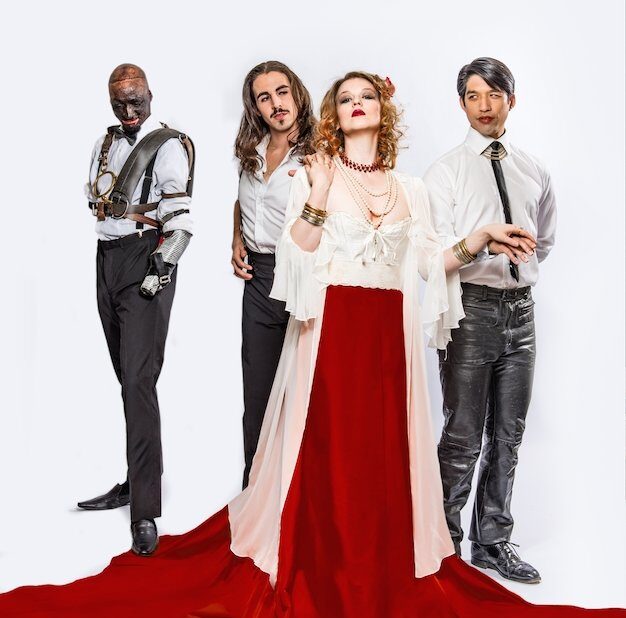 Thomas Middleton and William Rowleys The Changeling is one of the darkest and most sensual of 17th century English tragedies, a tale of hidden sexual desires, bloody deeds and characters who realize their intentions are less than pure.

Desiderata Theatre offers Julian R. Mundss adaptation of the text, Changeling: A Grand Guignol For Murderous Times, in the intimate Box Toronto the version emphasizes dark comedy and a sometimes tongue-in-cheek look at the characters. It also deletes the originals subplot, in which actions that take place in a madhouse reflect on the main tale.

The virginal Beatrice Joanna (Lauren Horejda) meets the dashing Alsemero (Sebastian Marziali) in church and they are immediately attracted to each other. Too bad that five days earlier, her father, Vermandero (Edward Heeley), had promised her in marriage to the self-impressed Alonzo (John Chou).

Thats not Beatrices only problem. She cant stand the sight of her fathers servant, DeFlores (Prince Amponsah), yet he does everything he can to be around her. Only when she realizes that DeFlores can be of use in solving her romantic problems via a murder does she speak kindly to him.

But things dont go as she plans: lust, treachery and subterfuge bring down all the central figures.

Director Harrison Thomass staging puts the action close to the audience, with many of the asides spoken directly to individual audience members. Its exciting when we become privy to homicidal intentions and randy desires.

Thomass occasionally flippant or camp reading of the characters sometimes works and sometimes doesnt. Horejda, Carissa Kaye as her seemingly virtuous servant, Djaphanta (who has it off with Alsemeros comic servant, Jasperino, played by Miquelon Rodriguez), and Marziali handle the style well.

But some of the humour is silly, with signs alerting us to events like sloppy makeout scene or a factotum character on whose back the words Ignore me are written. The comedys grimness, though, succeeds as the story edges toward its Grand Guignol finale of blood and violence.

The productions most engaging scenes are those between Beatrice and DeFlores, both striking in costumes designed by Claire Hill and Julia Matias. Horejda and Amponsah ratchet up the tension between this libidinous pair. Hes always aware of what he wants from her, but shes initially disdainful in his poisonous presence only gradually does she understand how much she owes DeFlores and, finally, her complicit guilt and attraction to him.