Review: among men is a ballsy look at two Canadian literary lions 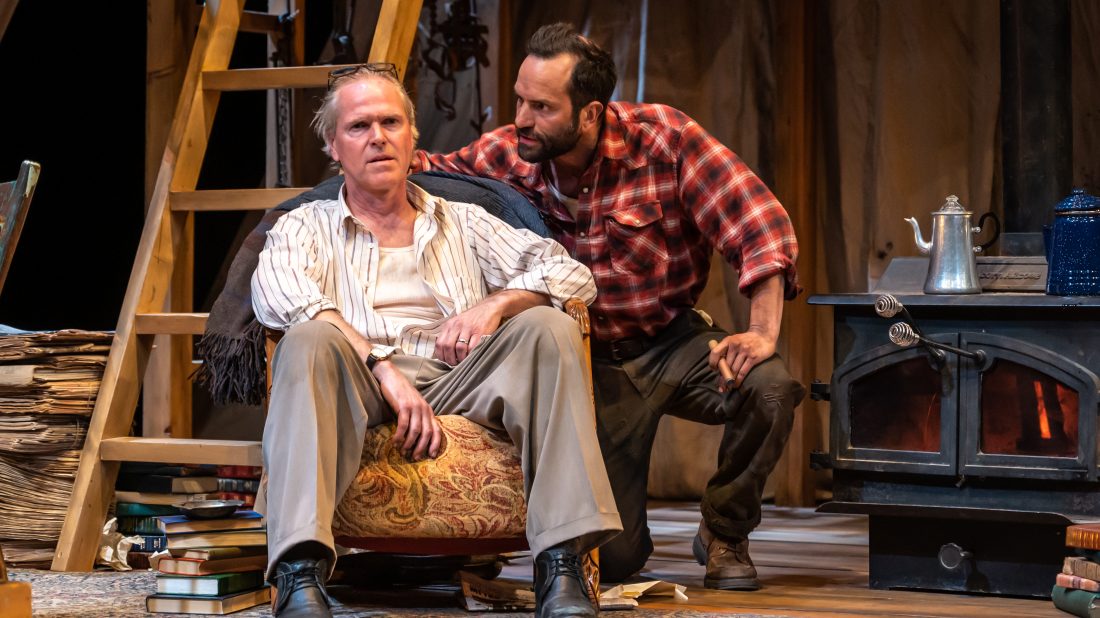 If the prospect of watching two men recite poetry, drink heavily and hammer at floorboards sounds boring, think again. David Yee has taken a footnote in Canadian literature and created a play that is raucous, lively, crude… and extremely moving. So far, in a very unusual Toronto theatre season, it’s one of the most pleasant surprises yet.

The two men are poets Al Purdy (Ryan Hollyman) and Milton Acorn (Carlos Gonzalez Vio). The time is the late 1950s, and the friends are holed up in what would become Purdy’s legendary A-Frame cabin on Roblin Lake in Prince Edward County, which, I should point out, was not the trendy, overpriced area it is today.

As suggested by Joanna Yu’s evocative set, the house isn’t yet complete. There are holes in the floor, beams jut out into nowhere, and the walls are partially stuffed with old newspapers. Acorn, a trained carpenter, is the more skilled worker. But Purdy dispenses coffee and booze, and makes eggs.

Gradually we realize these two artists aren’t yet complete, either. They’re years away from becoming the Governor General’s Award-winning poets – often individually dubbed “the people’s poets” – they would later become. Purdy is trying unsuccessfully to sell plays to the CBC, while Acorn has written three chapbooks but has little money and zero prestige. Both from working class backgrounds, they sneer at the literary establishment.

What’s so unusual about the play is that while nothing major happens in terms of plot, it’s always engaging. As the two work on the cabin, or roll up newspapers to feed the wood-burning stove that heats the room, they talk… and talk. Acorn expounds on the connection between eggs and one’s bourgeois status; Purdy discusses his failed attempt at running a taxi company. Occasionally, the two try to stump each other by reciting poems to see if the other recognizes them. The delight each man takes in speaking these lines says everything you need to know about their love of language and their poetic calling.

Yee plants little bits of information that may or may not pay off later. We learn, for instance, that Acorn lost some of his hearing during the Second World War. For some reason Purdy is separated from his wife, Eurithe, who also worked on the cabin. In a bit of literary gossip, Purdy also mentions that the young poet Gwendolyn MacEwan might be interested in the unkempt, solitary Acorn. (Literary types will know that the two later marry.)

What emerges from this casual-sounding but carefully structured script is the strong bond that connects the two men. They both recognize each other’s talents, and they understand – but don’t have to articulate – each other’s demons, the things that are holding them back.

Nina Lee Aquino’s direction enhances the production. The way she’ll often show the men drinking mechanically during transition scenes says a lot about male bonding – it’s suggested in the title, after all – while Christopher Stanton’s sound design and compositions underscore key moments beautifully. The way Michelle Ramsay’s lighting marks out pieces of crumpled up paper hanging from the ceiling adds weight and mystery to the story.

If I have any reservations, it’s that the play doesn’t really address the elephant in the room: the homoeroticism implicit in the situation, although it’s hinted at a couple of times. Near the beginning, Acorn recounts a raunchy dream in which a young Michael Ondaatje is fellating him at a reading; and Purdy himself speculates what the two must look like to neighbours. (How interesting it would have been to hear the two talk about Allen Ginsberg’s 1956 poem Howl, for instance, which they must have known.)

Yee’s script has Purdy put down Acorn several times for his homeliness, which Gonzalez Vio and his smouldering looks can’t quite make you believe. The actor also delivers an accent that’s bold, if not convincingly East Coast. Other than those two minor things, however, his Acorn is inspired and passionate, the poet’s talents only held back by his insecurities. Hollyman has the quieter role, and he’s marvellous, whether getting laughs in a scene in which Purdy has a construction accident and tries to cover it up, or a scene in which he recounts the lowest point of his life. His admiration of his friend’s talent is genuine and moving.

On one level, Yee’s play is a metaphor for the mysterious and difficult process of creating art. There’s poetic justice that it should be the last play Lee Aquino directs as Factory Theatre’s artistic director. During her 10-year tenure, she’s overseen some of the finest art the city has seen. She’s soon moving to Ottawa’s National Arts Centre where she will head up the English Theatre division. Toronto theatre lovers will miss her. 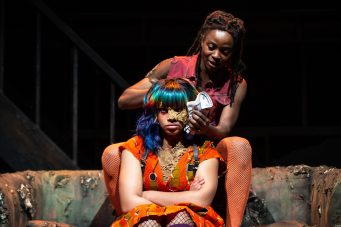