NOW MagazineCultureTheatre>>> Review: Noises Off is totally on

>>> Review: Noises Off is totally on 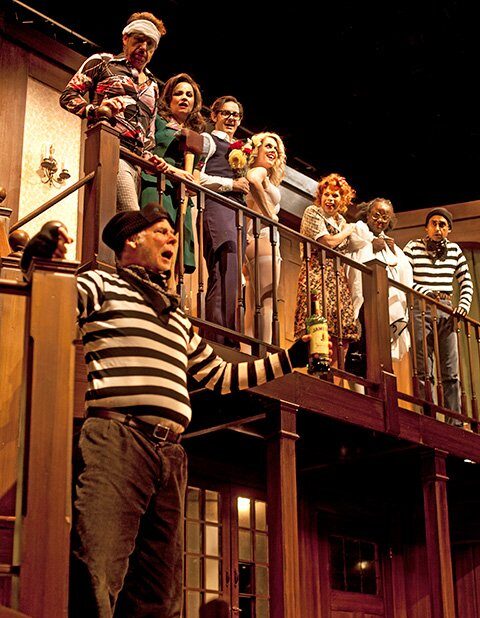 Despite its reputation for being absolutely hilarious, this is the first chance Toronto audiences have had to see Michael­ Frayn’s classic 1982 slapstick meta-farce about an ill-fated touring theatre company. Luckily, this fast-paced and technically demanding show is in good hands, and director Ted Dykstra delivers all of Frayn’s behind-the-scenes zaniness at full blast.

The play follows the production of a fictional by-the-numbers British sex farce called Nothing On, in which two amorous couples, a housekeeper and a burglar all end up in the same country house, each assuming they are the only ones there.

In the first act, we see the problem-plagued dress rehearsal and are introduced to the frustrated director (David Storch) as well as the quirky cast, which contains multiple messy showmances. This act, while very funny, is really just a set-up for the no-holds-barred comic romp to come.

The second act depicts a performance midway through the show’s run, but this time the set is flipped so the audience has a view from backstage, revealing that this is where the real action – comedy and drama between the cast and crew – is taking place, while the play out on the stage barely hangs together.

For the final act, the set is flipped again and we see the final, gloriously unhinged hot mess of a performance.

The second act is the clear standout, with the delightfully funny multi-level backstage scramble benefitting from spot-on timing. The cast nail various throws, catches, gags and fights – all at breakneck speed. Among the strong ensemble, Oliver Dennis’s hard-of-hearing whisky-inclined actor/burglar and Anand Rajaram’s perpetually overwhelmed stage manager scored the biggest laughs. With so much going on at any one time, this show rewards multiple viewings.