Review: Sasha Velour’s Smoke & Mirrors is cerebral to a fault 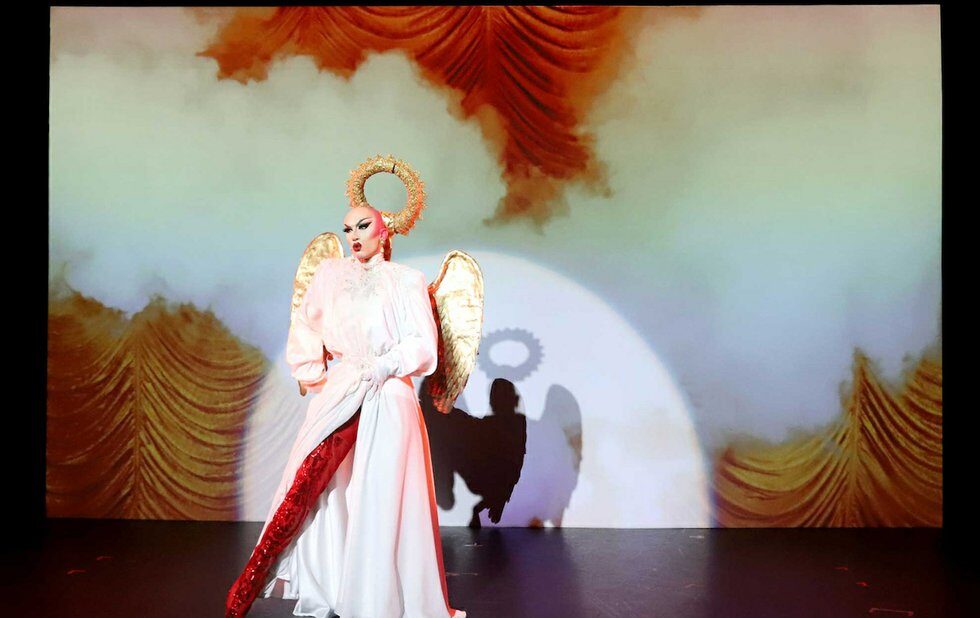 “Don’t you hate how drag has become costume, props and reveals?”

Sasha Velour posed a version of this rhetorical question at the beginning of her “one-queen show” Smoke & Mirrors at Danforth Music Hall. The first of a two-night stand, the Brooklyn performer’s cabaret-style set attracted a riotous audience familiar with her tickle trunk of high-concept drag and rose-petal wig reveals.

The RuPaul’s Drag Race season 9 winner’s coy self-call-out got laughs, especially since it came just after Velour gooped us all with an effortless transition from angel to devil during a lip sync to Annie Lennox’s Precious. As red smoke curled onto the stage, Velour high-kicked her leg, revealing a red-sequined catsuit and platform heel from beneath the folds of a saintly white robe. She ended the rendition by smashing a halo into devil horns, transforming Lennox’s 1992 ode to new motherhood into a dark cautionary tale of how status and attention-seeking can seduce even the most piteous.

If ever there was a queen that could do conceptual, it’s Sasha: She’s a Vassar grad and Fulbright scholar whose Nightgowns drag theatre shows have been deservedly praised by Time Out New York as “the thinking queen’s drag show.”

So why did I leave this show wishing it had more heft and nuance? Velour’s cerebral approach seems to get in the way of trusting her audience to connect the dots.

That problem was most evident in the obvious visuals for the closing number. Lip syncing to Nina Simone’s version of Wild Is The Wind, the queen – a graphic artist and designer who directed and staged this show – stood tall in a curve-hugging white gown painted with tree bark, her silhouette augmented by a projection of digital bare branches. Velour’s biggest strength is her interpretative movements – the ways she accents a crescendo with widened arms stretched in the air or teases out a few chords with the pull of an opera glove.

Wild Is The Wind is a gutting song, perilously teetering between naked, declarative romance and moody distance. Those emotions were unfortunately lost in a Disney-esque seasonal metaphor – yes, I kid you not – of a red robin flying into the scene, turning the leaves green, then flapping away when they change from purple to red and fall to the ground. Despite Velour’s best efforts, the projected image obfuscated her angular bodily gestures. It was so literal, leaving nothing to the audience’s imagination.

As drag becomes more mainstream – and its queens build businesses rivalling Mama Ru’s own – perhaps we should have expected that drag’s subversiveness would get toned down in the face of pressure to always be on and available for social media followers. Increasingly, the standard for drag is set by Drag Race. Indeed, one number that had fans squealing and leaping from their seats was when Velour recreated her iconic rose-petal reveal from her Drag Race lip sync to Whitney Houston’s So Emotional.

There were also strong moments in Smoke & Mirrors. Velour is at her best when she weaves a performance with a strong autobiographical or even historical narrative.

During the second half of the show, she paid tribute to her mother and father for “allowing me to embrace femininity” by moving behind the projection screen and doing shadow theatre. As Céline Dion’s 2000 single I’m Alive played, we could see Velour’s silhouette changing in a dressing room: stripping down, tightening a corset, shaving her neck, stepping out of heels. As she pulled on her Nosferatu ears – a signature prop – the simple staging effectively conveyed a shadowy intimacy. There was a seeming duality at play with Dion’s torchy extraness and the German Expressionist visual references it was an appropriate alignment, especially given how much the early 20th-century art movement valued an artist’s inner emotions, abstraction and bright colours.

Similarly, Velour’s performance of Judy Garland’s Come Rain Or Come Shine was a powerful evocation of the Stonewall riots and queer history. It featured projection mapping of falling white water drops against a black backdrop that evoked the wonder of a MGM musical number.

But these moments were also hindered by the aforementioned “sexy self-help.” As Drag Race remaps the ways in which we expect queens to perform, it also demands uncomplicated transformation narratives in which a queen’s stardom coincides with her becoming a more engineered and better version of herself. While it was commendable that Velour spoke candidly about wanting to express “multiple Sashas” and how celebrity has compounded her depression and anxiety, that vulnerability didn’t necessarily add depth to the show.

Sometimes the “magic” tricks of her projection screen did more to obscure those multiple Sashas than bring them forth. It be nice if Velour’s use of the projection allowed for a close-up – after all, the deep-cut musical selections are there already.