NOW MagazineCultureComedyReview: Star Gays could use some more comic thrust 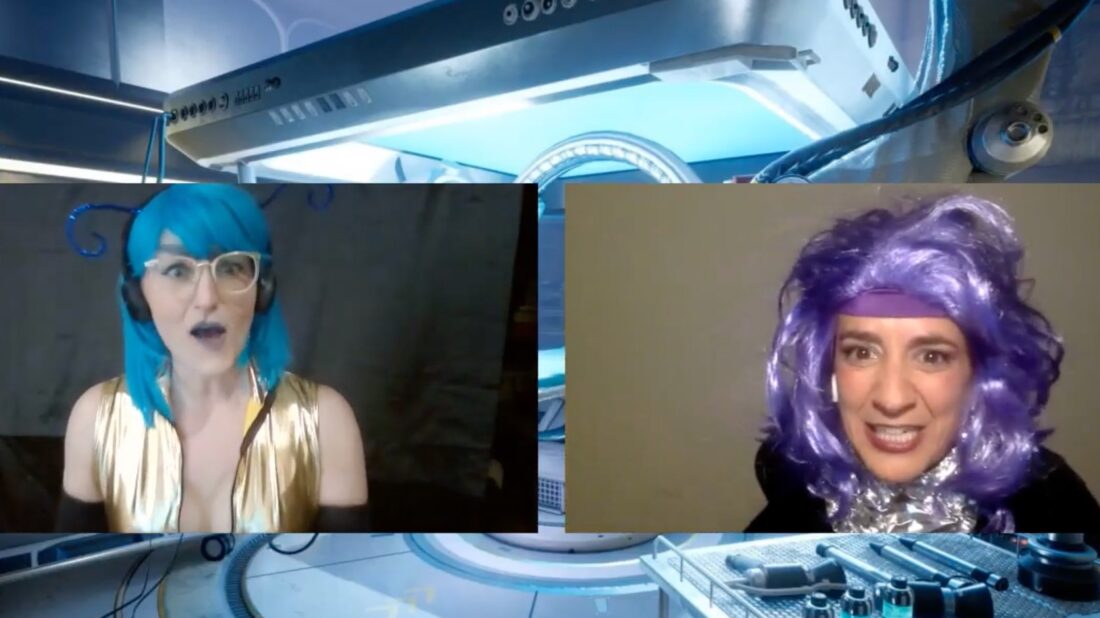 Stephanie Malek (left) and Jillian Welsh camp it up in Star Gays.

The physical Bad Dog Theatre may be shuttered – they’re looking for a more accessible space to relaunch – but that doesn’t mean there’s no comedy coming out of the improv institution. Just click on the Shows tab of their website to see what’s going on at their busy, eclectic Bad Dog Comedy TV channel.

The campy sci-fi soap opera Star Gays streams live every Monday night until the end of February. And while not all the comic engines were firing at full capacity last night (the series’ second performance), the show has the potential to blast away your quarantine winter blues.

Tacky, sexy, ridiculous sci-fi adventures have inspired many a queer artist. Think of the famous Queens In Space episode from RuPaul’s Drag Race, or Sky Gilbert’s Drag Queens In Outer Space. There’s something about the glorious lo-fi-ness of it all, plus the outrageous costumes, multi-hued wigs and futuristic weaponry that screams camp. On a more serious note, perhaps space is that final frontier that will offer full acceptance of beings of all sorts.

Led by Captain Mae Epps (Nkasi Obgonnah), the crew of the S.S. Relationship receives a message to retrieve a creature from a derelict space station. But the mission soon devolves into a comic romp full of mixed signals and sexual innuendo, as Science/Magic Officer Kröndle (Hackett) pairs off with Chief Engineer Dirk Kirby (Kyah Green), Side Captain Olivia Hawthorne (Stephanie Malek) teams up with Dr. Tee-Kay (Welsh) and Epps experiences a close encounter of the most intriguing kind with the ship’s computer system (Morrow).

I couldn’t find a director listed in the credits, and that might explain why the narrative flow feels a bit lost in space. There was no recap of what happened the week before (something that’s pretty de rigueur for soap opera style shows), and apart from quirky mannerisms – Hawthorne’s squeaky voice, for instance, or Dr. Tee-Kay’s nerdy, repressed laugh – I couldn’t initially grasp what each character was about.

But soon the hour-long Star Gays found its way. Malek offered up the most interesting and helpful suggestions, filling in details about how Hawthorne had watched her entire race be killed by the very ship she was on. And Morrow, doing double duty as the ship’s computer system and a mysterious, masked figure requesting the creature from the space station, came through with some intriguing (and funny) suggestions, often spoken in a robotic computer voice. (Morrow couldn’t quite master the inverted speech patterns of a Yoda-like creature – but that is understandable.)

There were some very funny gags, including an amusing non-binary joke. And kudos to whoever said “Your communication is off” when a character was on mute. There was also an imaginative use of props, particularly when one character seemingly passed something to another through the screen.

A couple of tech glitches aside, the presentation of Star Gays is wonderful, with vivid backdrops and charming 3D animation by Matt Schuurman that will make you feel like you’re in the family rec room watching some Sunday afternoon B movie.

I look forward to seeing where these people end up. With a bit more direction, comic thrust and chemistry among the characters, it could be a fun journey.