Review: The Antipodes is the play we all need to see right now

Annie Baker's play about the power and importance of storytelling is funny, mysterious and completely engaging 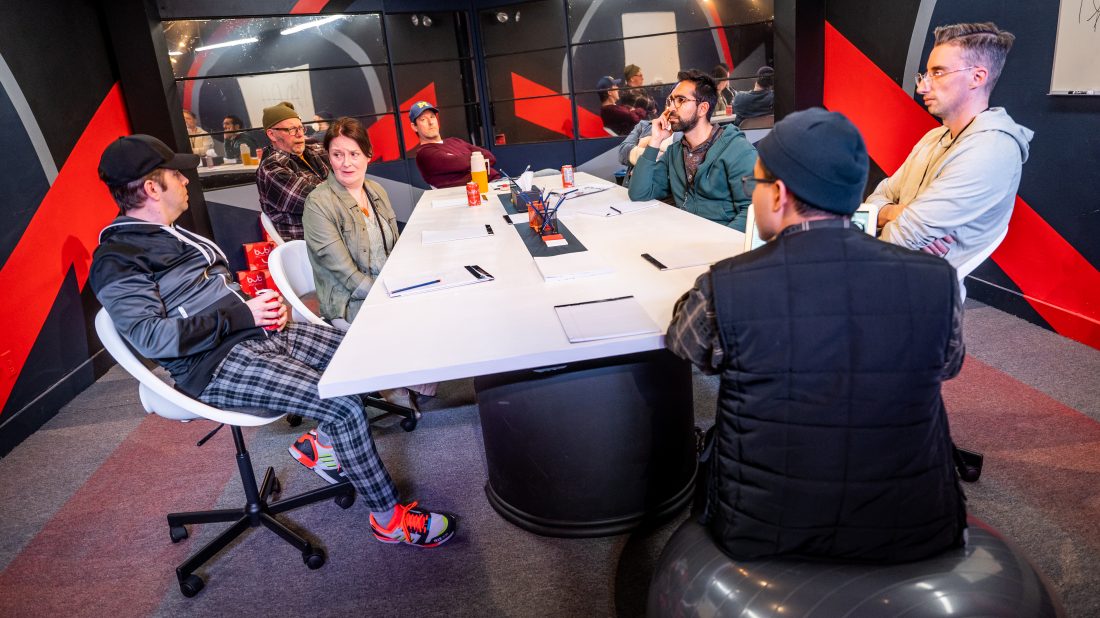 THE ANTIPODES by Annie Baker (Coal Mine Theatre, 1454 Danforth). Runs to May 15. $35-$72.50, some rush available at each performance. coalminetheatre.com. Rating: NNNNN

“We tell ourselves stories in order to live,” wrote the late Joan Didion. That could be an epigraph to Annie Baker’s The Antipodes, an absorbing and mysterious meditation on the power and importance of stories and storytelling.

The play is set in a conference room meeting led by head honcho Sandy (Ari Cohen). On either side of him sit Danny (Murray Furrow) and Dave (Joshua Browne), both of whom have worked with him before and so subtly lord it over the new folks. These novices are mostly a bro-ey bunch and include the bright Adam (Nadeem Phillip), Josh (Colin A. Doyle), whose paperwork hasn’t yet been figured out, and the nervous, tentative Danny (Simon Bracken), who is nicknamed Danny M2 to distinguish him from the more senior Danny M1.

There’s also Eleanor (Sarah Dodd), the only woman on the team. Sandy’s former assistant, Brian (Joseph Zita), has been promoted to note-taker at the meeting, while his current assistant, Sarah (Kelsey Verzotti), fields calls at an unseen desk out front and organizes everyone’s takeout orders.

Baker (The Flick, The Aliens) has intentionally left the purpose of this group vague, but initially it seems like a writers’ room for a TV show. When we first meet them, they’re brainstorming ideas about monsters. Then they discuss concepts of time. Are they working on a fantasy series? Developing a video game? Sandy encourages them to tell stories, preferably personal ones, because “that’s where the good stuff comes from.”

And so we go from person to person as they tell tales, grandstanding, humblebragging and trying to impress – with not a little bit of misogyny – the decision-maker at the head of the table. It’s like a Darwinian exercise for the creative classes, or A Chorus Line if it had been set in a board room instead of a theatre.

In one of the show’s best scenes, the entire group smiles through a video conference call with a superior named Max, and the man’s main points are garbled and unclear – which will be familiar to anyone who’s been on an insecure Zoom call. (Kudos to sound designer Andy Trithardt for making this scene sound so suggestive.)

Hours, days and weeks pass, and the group (mostly) remains intact. Only Sandy is allowed to leave; his wife is dealing with a health issue, and an unusual storm is raging outside. Sarah appears at the office doors to give the workers updates on when Sandy will reappear. But is he really bailing on the project? They continue telling stories, like so many Scheherazades, to stay in the group. Meanwhile, things in the room (and, apparently, outside) become more unhinged.

Although the play clocks in at around two hours (no intermission) and lacks a traditional plot, director Ted Dykstra keeps things moving quickly. There are no blackouts between scenes; the actors just pause and move onto another scene with a completely different energy. Dykstra’s ear is so finely attuned to the rhythms of human interaction that even the opening of a can of soda can seem like an act of aggression. And if I were to watch this production a second time – it definitely warrants one – I’d pay more attention to the characters’ shifting positions around the long narrow table. (Nick Blais’s set and lighting are, as usual, superb.)

It’s hard to single out any performance, but Cohen is brilliant as Sandy, his voice dripping with faux sincerity and concern. One of his monologues praising a former mentor is full of effusive ramblings that sound enthusiastic but say absolutely nothing. Furrow’s tale about infidelity is simultaneously funny and horrific. Zita nails a scene that goes to a truly surreal place. Dodd, Doyle and Bracken are touching and awkwardly charming as people who can’t quite break into the inner circle. And Verzotti’s Sarah emits a forced enthusiasm that never descends into parody; her chirpy delivery of a fairy tale-like story with dark undertones is a showstopper.

After two years without theatre, there’s something appropriate and powerful about being so fully engaged in a story about stories. Coal Mine, whose productions are often a highlight of any theatre year, has made a triumphant return. This is a play we all need to see right now.