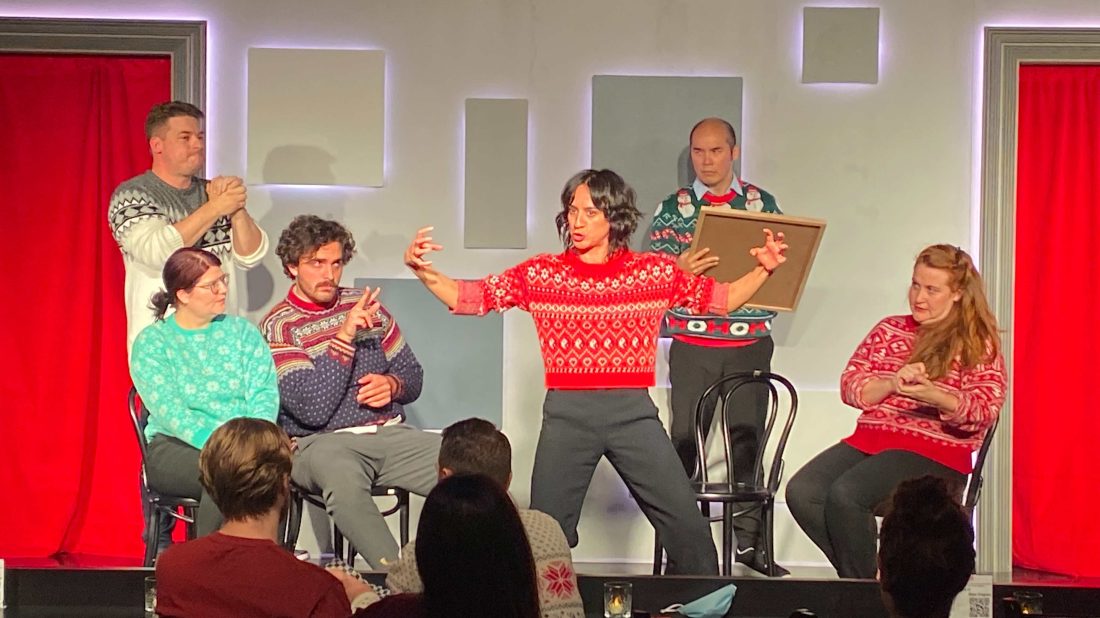 Now that holiday family gatherings are on again, it’s time to celebrate yet another tradition: Second City’s annual seasonal revue. This year’s edition, The Fast & The Furiously Festive!, might not be the most graceful sleigh (slay?) ride, but it will certainly get you through the season with a big smile on your (masked) face.

Not surprisingly, family rituals get skewered with lots of humour. One of the biggest laughs comes from a brief sketch about the family members you don’t want to see over the holidays – the details are so specific you’re bound to relate. And there’s an ongoing, somewhat wandering, bit about an extended family who attempts a raid on a grocery store because they don’t have any cranberry sauce.

Also ripe for satire is the nightmarish ritual of Christmas shopping.

In one terrific scene, Andy Assaf plays a store clerk who has to deal with three different kinds of customers-from-hell: the sick shopper who’s wearing her mask incorrectly (Liz Johnston), the dolt who wants to return something without a receipt (Wilfred Lee) and the jerk who’s convinced she has a flyer to get a product cheaper (Nicole Passmore). The operatic finale feels like the final word on Karens.

And another hilarious sketch shows eager shoppers bursting through the doors of the Dufferin Mall only to realize they haven’t been in such close proximity with strangers in a while. Credit director Danny Avila – and an appropriate song, which I won’t spoil – for making this scene so vivid.

One holiday activity many will be doing during the next month is binge-watch all the TV shows they’ve missed. So the sketch featuring Jillian Welsh and Assaf as a couple who have “cheated” on each other by secretly watching things separately when they were meant to watch together should hit home.

Despite the show’s title, there are plenty of non-holiday-themed sketches that still feel a propos – and not just because many in the cast wear red-and-green sweaters.

A couple of smart scenes play up people’s lack of empathy. Another shows a family doctor (Johnston) dealing in a gloriously passive-aggressive way with a couple who refuse to get their child vaccinated. The opening night response for this sketch was a bit muted – too soon? Too close to home?

One sketch that shouldn’t work but does is about a boy (Lee) recovering from an appendix operation in a hospital who gets a very unexpected surprise guest. It’s here that the cast – especially Passmore and Assaf – show off their impressive physical chops.

Passmore and Welsh shine in another non-holiday scene, this one about two elderly Scandinavian women who seem perfectly fine isolating inside but have dark and chaotic thoughts when the lights go down. And Passmore scores in yet another scene as an awkward, frustrated teen chatting with his mom’s boyfriend (Andy Hull). This is one of those Second City sketches that is so beautifully written it doesn’t even need to end in laughs, although it does.

There are many improvised scenes in this show. And while most were hit-and-miss, the final one, involving an audience member who recounted a cherished holiday memory, inspired the cast to go very big. That, in turn, segued into a clever ending.

This is the first live, in-person sketch show I’ve seen in 20 months. It was worth the wait.