Rick Roberts's take on the Greek tragedy is clever, urgent and of the moment 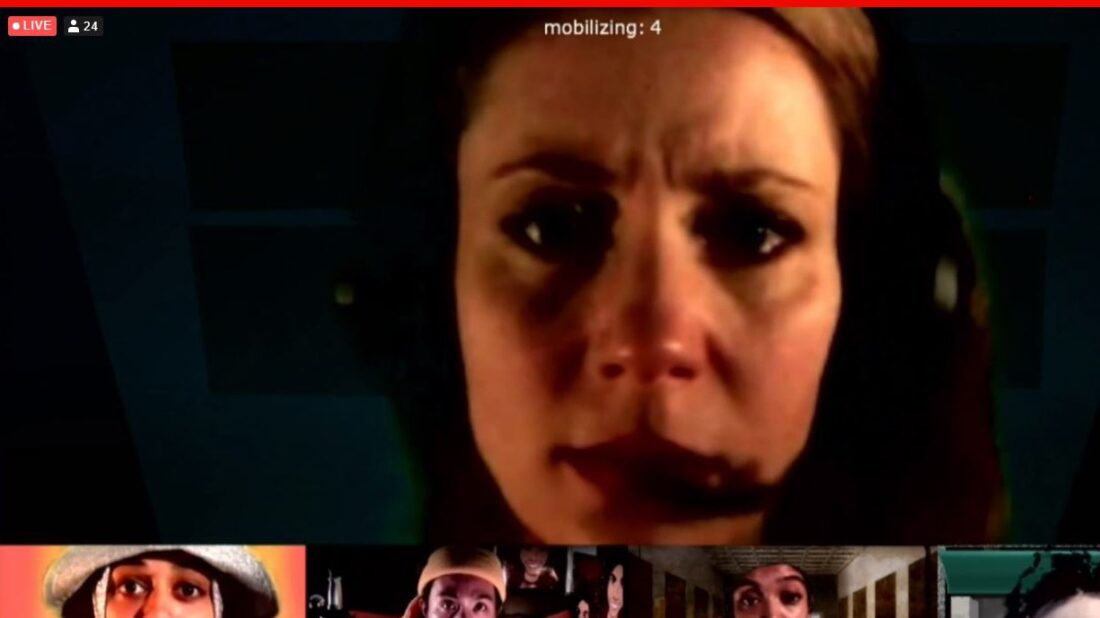 Rick Roberts sets his Orestes in the world of sex tapes, viral videos and Zoom calls.

Because of the pandemic, we’ve all been looking at – and clicking through – various screens for the past 11 months. So, obviously, has playwright Rick Roberts, who’s written a live-streamed, lockdown version of Orestes for the Tarragon that’s clever, urgent and of the moment. As with a lot of digital media, however, it also evokes a strange feeling of detachment – despite many attempts to keep us engaged.

In Roberts’s version of the Greek tragedy, Orestes (Cliff Cardinal) is an internet star who, as one of the punishments for murdering his mom Clytemnestra (who killed his dad, Agamemnon), has been cut off from all social media platforms. His sister, Electra (Krystin Pellerin), is trying to get him uncancelled, mobilizing a campaign – through a hashtag, of course – to put him back online.

But standing in their way – or perhaps blocking their internet signal? – is their powerful uncle, Menelaus (Richard Clarkin), who has reunited with his wife Helen (Lisa Ryder). Helen, remember, indirectly caused the Trojan War, which kicked off this repeated cycle of violence and vengeance.

Director Richard Rose and video and stream designer/operator Frank Donato have created a vivid, playful interface for us to absorb what’s going on. Each of the characters has a colourful, pixellated Zoom background that gives us a sense of who they are – or how they want to be perceived – in this strange universe. Especially memorable is the way a character will occasionally pop up on the screen – consider it the digital equivalent of making a great entrance.

Roberts obviously had a lot of fun imagining a contemporary context for this ancient story of law and order.

Orestes learned about his mom’s adultery through – what else? – a sex tape. When Helen tries to call her daughter, Hermione (Eleanor Guy), the ring tone the girl receives is the Imperial March theme from Star Wars: cute. And when Helen – no stranger to manipulation, remember – wants to disappear from a video call, she pretends that her connection is unstable, resulting in the frozen Zoom screen all of us by now recognize. Except she ruins it by blinking her eyes.

Roberts’s choice of diction is intriguing. He doesn’t shy away from employing heightened, almost poetic language. Sometimes the dialogue seems precious; other times, it’s clear and effective, as when David Fox’s gruff patriarch, Tyndareus, tells his son Menelaus: “Your sentences erase themselves as they leave your mouth.” Brilliant.

If the presentation feels remote, the artists provide several chances to interact with some of the characters, resulting in a choose-your-own-adventure vibe. Unfortunately, these seem available only for the secondary characters, a chorus of tech-savvy Orestes acolytes and followers. I found these diversions disappointing because I had to input a password each time, and the results weren’t the most dramatically exciting.

The main story emerges intact from all of the static, however. Clarkin is especially good at getting into the slimy skin of the crafty Menelaus, whose “Family First” slogan as a politician is merely a PR stunt. Ryder, glamorously made up by costume designer Shannon Lea Doyle, is a magnetic, believable Helen. Pellerin, her face in close-up for much of the show, powerfully communicates Electra’s single-minded goal. I wish there were more layers to the title character, although Cardinal infuses him with the entitled air of a modern-day influencer.

This Tarragon production of Orestes wouldn’t make sense in a traditional theatre setting. What Rose and his team have done is show characters watching, monitoring and interacting with each other from different places. That’s so well established that when the climax comes it’s genuinely exciting, making us suspend our disbelief in the same way we do when we’re watching a non-virtual staging.