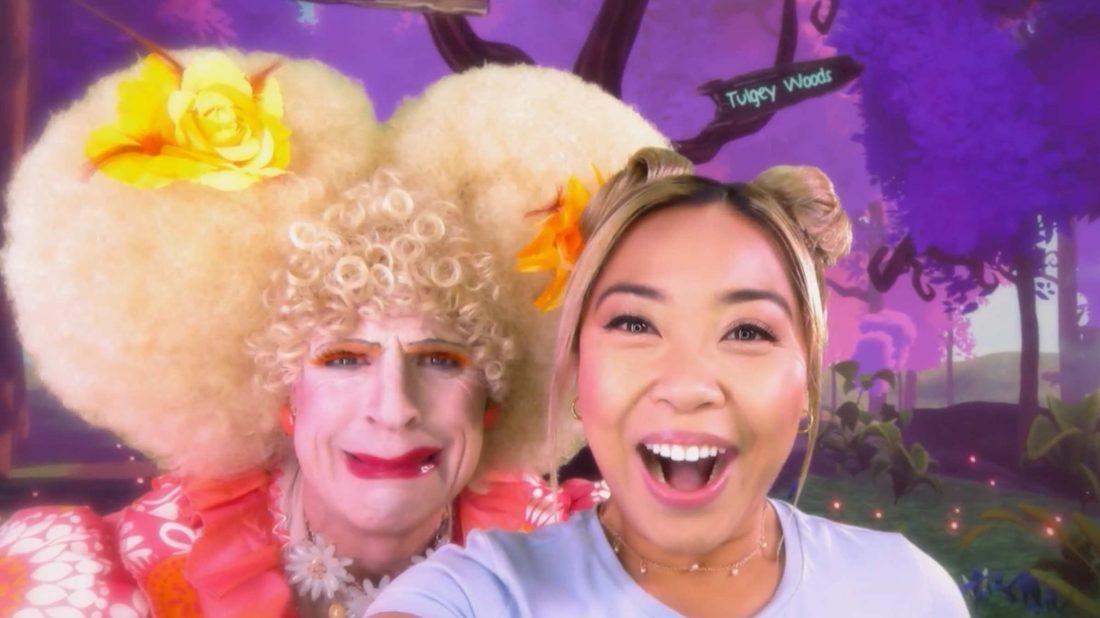 With the state of the world in total upheaval, Lewis Carroll’s fantasies feel like the perfect entertainment for the times. So Ross Petty Productions’ Alice In Winterland – its second annual virtual panto offering – should entertain loyal fans and earn new followers suffering from pandemic fatigue.

Allie (Kimberly-Ann Truong) is just about to launch her new mushroom business, Allie’s Shroom Room, when she’s met by both Plumbum (panto regular Dan Chameroy) and the evil witch Frostina (Sara-Jeanne Hosie) and her put-upon henchman Algor (Eddie Glen), all of whom want to go to Wonderland, but for different reasons.

Plumbum is planning on enjoying her timeshare there; but Frostina wants to use her dark magic to change everything into an ice palace called Winterland. It’s up to Allie, Plumbum and the magical creatures they meet when they travel down the rabbit hole to solve some riddles, take some potions and defeat Frostina – all without becoming frozen blocks of ice.

Matt Murray’s script isn’t his most graceful effort, although there’s a funny joke about Toronto raccoons, and Chameroy gamely delivers his innuendo-laden dialogue with perfect timing.

The real joy of Alice In Winterland comes from the songs – Truong, who starred in Miss Saigon on Broadway, has a powerful voice and lots of charisma, Hosie almost channels Carole Pope in her numbers and Truong and Chameroy have great fun reprising Earth, Wind and Fire’s Boogie Wonderland throughout – and the digital universe. The colourful, sparkling background and special effects look spectacular. And Ming Wong’s costumes – including a glamorous get-up for Thom Allison’s ChesPfizer Cat (a name better understood when spelled out than when spoken) and a stylishly overworked outfit for Hailey Lewis’s Mad Hatter – are equally stunning.

Half the fun of Petty’s pantos comes from the audience participation; the cheering of the protagonist and the booing of the villain. Directors Mike Fly and Tracey Flye have provided the sound of kids’ booing to get you in the spirit.

And there’s even more fun audience participation in store if you decide to watch the choose-your-own-adventure version of the show. Since links to the show are available for 48 hours, you’ll have enough time to watch both versions.

Petty introduces the show at the beginning, and appears again at the end to remind us that 2022 will be the 25th anniversary of the live panto. Let’s hope it will be an in-person affair. Digital entertainment is fine, but the holidays just aren’t the same without being able to experience this Toronto tradition in person.