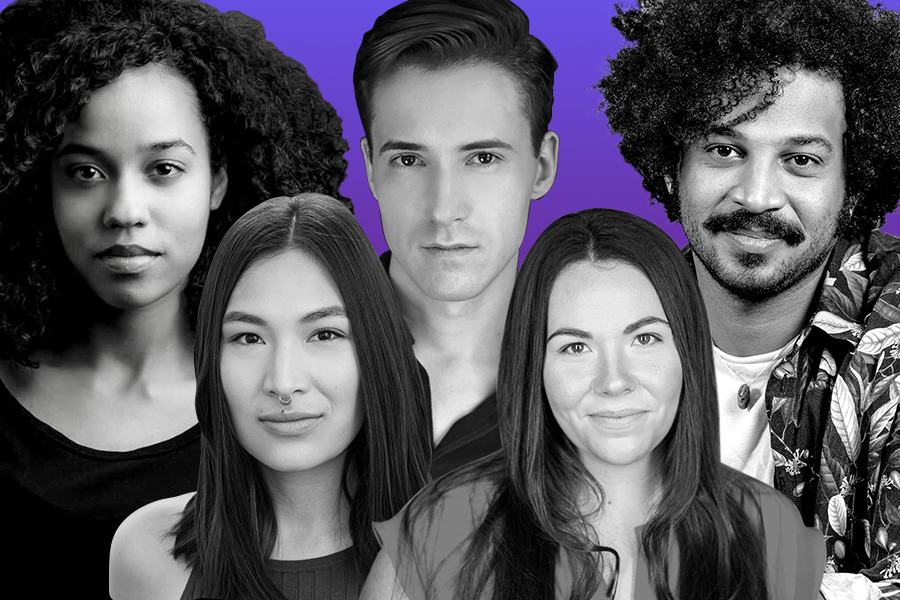 Theatres may currently be closed because of COVID-19, but that doesn’t mean an end to the development of exciting new artists. Soulpepper is clearly looking to the future with their announcement this morning of the latest Soulpepper Academy.

The prestigious Academy program offers promising artists from across the country an opportunity to learn from and train with Soulpepper’s artistic director Weyni Mengesha and new and returning faculty members. Mengesha herself was part of the company’s inaugural Academy in 2007.

The artists will be paid a living stipend during the 26-week program; then they will receive an Artistic Residency with the company.

Some of them have already done work in local shows. Brown, a mixed-race Anishinaabe and European settler storyteller from Onaping in Northern Ontario, was a striking presence in Soulpepper’s August: Osage County and had a big role in ARC’s fine production of Oil, which closed during the pandemic.

You may have seen their work before

Der, a mixed-race performer and theatre maker who was born and grew up in Toronto, handled the demanding role of Helena with ease in 2019’s outdoor All’s Well That Ends Well from Dauntless City Theatre. She was also part of the strong ensemble in a 2018 Fringe production of Sarah Kane’s Crave.

Winnipeg-born Morris grew up in Toronto’s West End and calls herself a dramatic storyteller who’s “drawn to wordplay and a healthy dose of satire.” She founded PIECE OF MINE Arts, a platform for presenting works-in-progress by Black theatre artists. Most impressively, her first play, The Negroes Are Congregating, a co-production between PIECE OF MINE and Theatre Passe Muraille, was nominated for a Dora for outstanding new play and has received productions in the U.S. and Europe.

Hamilton-born Krmpotic spent most of his childhood in Bosnia and Croatia before returning to Canada to study. He was part of Stratford’s Birmingham Conservatory for Classical Theatre and had roles in the company’s 2019 productions of Othello, The Merry Wives Of Windsor and The Front Page; he was to have appeared in three productions in the cancelled 2020 season there.

Exiled from Iraq because of a TIFF film

Born and raised in Baghdad, Iraq, actor/writer/director Moneka came to Toronto five years ago but has already collaborated with some of the city’s most acclaimed institutions, like the Canadian Opera Company, the Tarragon Theatre, Modern Times Stage and the Aga Khan Museum. He’s one of the founders of the band Moskitto Bar and created and leads Moneka Arabic Jazz. His film The Society, which he co-wrote and starred in, premiered at TIFF and, because of its queer theme, resulted in his exile from his native Iraq.

Because of the pandemic, classes, studios and workshops will incorporate virtual learning where required. But once live shows start up again, you can count on seeing the names of these Academy artists in Soulpepper productions.

“Given time, space, security to experiment”

“With the Academy I was given time, space, and security, to experiment and take risks which allowed me to really grow as an artist,” says artistic director Mengesha in a press release. “I’m so delighted we can offer [the new Soulpepper Academy members] that same time and space to reach for the impossible, speak their truths, and help us find bold new ways to tell our stories. I am incredibly inspired by these five individuals and am excited to both teach and learn from them.”