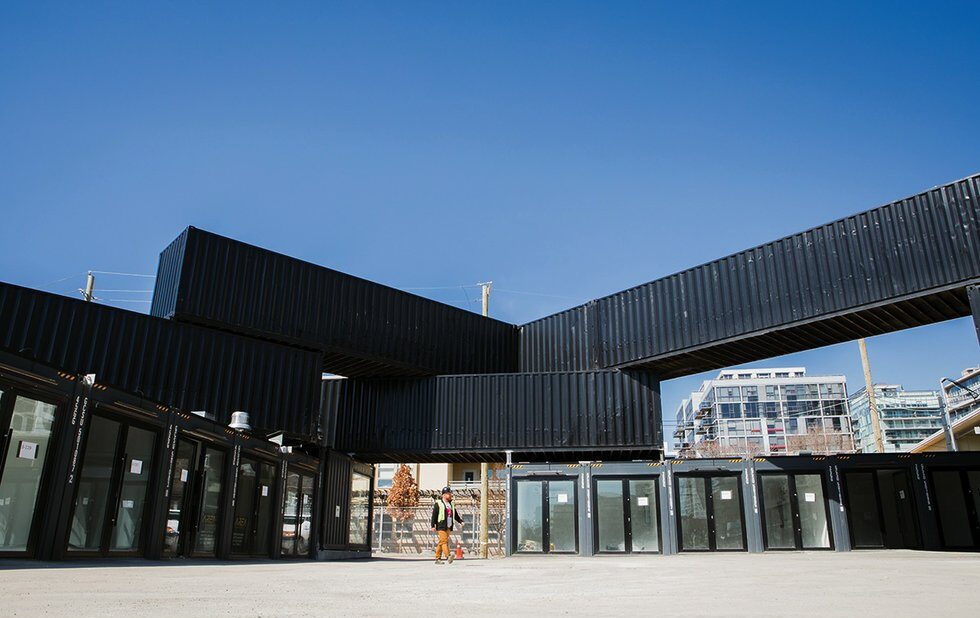 Over the last decade, Toronto has developed a knack for turning urban eyesores into imaginative public spaces.

In the West Don Lands, the playground Corktown Common sprouted up from remediated industrial land, while Underpass Park and The Bentway, two parks erected beneath the Gardiner, have turned the expressway into a pedestrian destination.

Matt Rubinoff, who works in real estate and marketing, hopes to do the same with a new project on the footprint of a former smelting plant near Bathurst and Front – and to do so, he’s thinking inside the box.

Soft-launching on April 10, Stackt is a year-round market featuring shops, eateries, galleries and artist studios set up inside dozens of shipping containers. Tucked between the hulking gunmetal grey boxes, which will eventually become artist canvases, are patches of artificial lawns, a basketball court, a skate park and a viewing platform to watch trains rumble along the rail corridor.

“The idea of the project is very interesting because it’s about flipping what is often seen as a barrier or a negative – in this case, a massive rail corridor – into something that’s actually an object of fascination.”

Stackt isn’t Toronto’s first shipping container market – Market 707, run by Scadding Court at Bathurst and Dundas, opened in 2010 – but it’s the most ambitious. It will have a 6,500-square-foot brewery, a food pavilion and, later this season, a greenhouse for vertical farming. Over the next two months, Stackt is hosting events in collaboration with Earth Day Canada, Contact Photo Fest, NXNE and Pride.

Prior to Stackt, the site was a parking lot stretching from Bathurst to Tecumseth, and before that, an iron-smelting plant from 1900 until the late 1980s. Toronto has zoned the area as parkland, which requires remediating the contaminated land. While the city raises the necessary capital, Stackt is leasing the site for a year and half for $886,000.

Rubinoff has big plans beyond that, though. He hopes to extend the lease and eventually replicate the concept in other neighbourhoods. In the meantime, this hybrid public-private space and family-friendly hub aims to attract King West residents in desperate need of both. According to a staff report, downtown Toronto has one of the lowest percentiles of parkland per capita in the city. But before the concept can take hold, Stackt must first pass the smell test.

Rubinoff began envisioning Stackt around four years ago after living nearby on Tecumseth.

“I know the neighbourhood well and always saw an opportunity to create a public gathering space,” he says. “We want this to be a new destination within the city, but also build a cultural community hub.”

To do that, Stackt checks off many boxes: there are trendy shops, snack bars, pop-up restaurants, floral arranging and learn-to-DJ workshops to attract young condo dwellers in nearby Liberty Village and CityPlace, while outdoor movie screenings, green space (albeit with artificial grass) and a train-viewing platform – dubbed Urban Discovery and designed by Derail Platform for Art + Architecture – cater to families.

“At the start, we’ll have 30 brands. Some could be there for weeks, some for over a year. We’re going to be ever-changing,” says Rubinoff, stressing he never wants Stackt to feel stagnant.

Many tenants are local entrepreneurs, some of whom are opening their first brick-and-mortar shops, like Toronto fashion designer Ellie Mae and makeup brand Richface, or more established indie shops like coffee roaster Reunion Island and vegan “butcher” YamChops. Trevor Lui of the Taiwanese Kanpai Snack Bar is mentoring two chefs who will open their first restaurants within Stackt.

But the market isn’t local-only. Corporate brands like mattress company Endy, BMO and Tetra Pak water company Flow will also have containers, and Molson Coors-owned Belgian Moon will run the brewery. After all, Stackt is for-profit, meaning it’s less Market 707, which is run by a community group, and more akin to London’s retail park Boxpark, which launched in 2011 with brands like Nike, Levi’s and Calvin Klein. 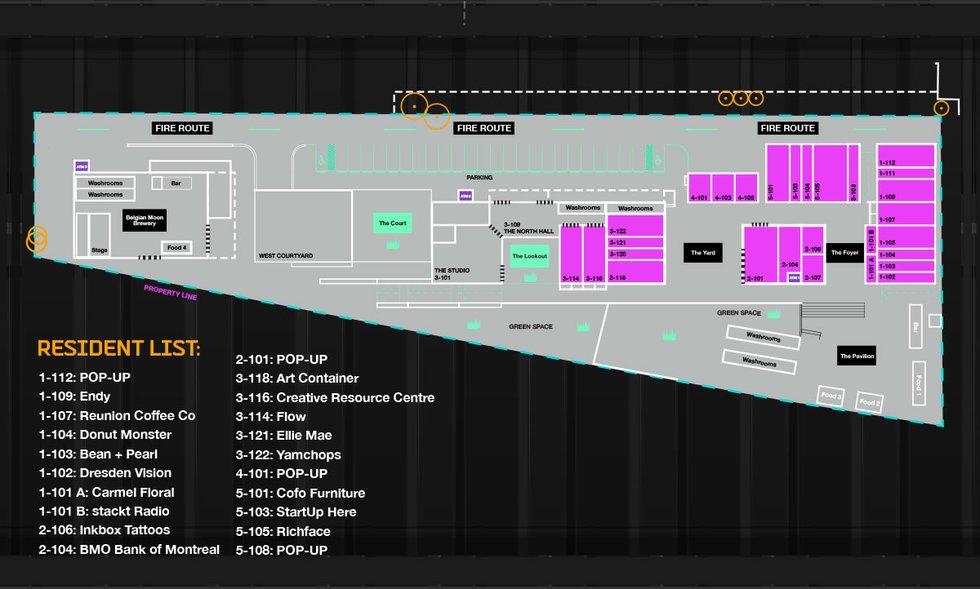 Rubinoff says that one of Stackt’s goals is to become integrated into the surrounding community. To do this, Stackt’s teamed up with Scadding Court to run their greenhouse, and they’ve hired two maintenance workers from Fort York Residence, the shelter just north of the site.

“This is one of the fastest-growing neighbourhoods in the city,” says Rubinoff. “We saw the amount of condos being built and you get the sense that developers were playing catch-up on the commercial and services side. We can react much quicker and fill in those gaps in the meantime.”

Although it took years to navigate city hall, it took less than a year to build Stackt. That’s why Rubinoff is confident it could be duplicated in other cities.

“The whole project could be picked up and moved to another lot or even a few different lots,” he says.

Technically, Stackt isn’t a public space. It falls under the realm of POPS, aka Privately Owned Public Spaces – not necessarily a bad thing, though. Stackt will have opening and closing hours, but visitors aren’t required to buy anything to hang out on the site when it’s open.

As urban planner Rob Voigt explains, POPS can sometimes be even better at uniting neighbourhoods than public spaces like basic parks.

“St. Lawrence Market functions super-well. It drives community cohesion and identity. There are people who come from all over the city, but it can also be part of [the locals’] daily activities,” says Voigt. “[POPS], along with truly public spaces where people can do whatever they want, are gradients that allow for communities to be healthy and feel connected.”

In July, plazaPOPS, a series of six “pop-up” community spaces within the Wexford Plaza parking lot in Scarborough, will open for a six-week run. The brainchild of artist/writer Daniel Rotsztain, plazaPOPS plans to build public gathering spaces – like gardens, stages for theatre performances and music, shaded seating and food trucks – in inner-suburban strip mall plazas.

Jake Tobin Garrett is the policy and planning manager of Park People, the non-profit that selected the Urban Discovery project as one of the winners of its incubator program.

“The idea of the project is very interesting because it’s about flipping what is often seen as a barrier or a negative – in this case, a massive rail corridor – into something that’s actually an object of fascination.”

And like Voigt, he sees the value in not-so-public spaces.

“Stackt is animating a vacant lot that has remediation issues before it can become a public park,” says Garrett. “When we have so much density and population growth in downtown, it’s really unfortunate that we have spaces sitting empty. We can’t always find ways to program them.”

Downtown Toronto is still in dire need of true parks, with real grass, areas for children to play and inclusive programming. Community associations like the Friends of Fort York and Garrison Common and the Ossington Community Association have written to the city supporting the Stackt site as future parkland.

In the interim, though, Stackt is an experiment worth keeping an eye on.

“As we build vertical communities, there hasn’t been a ton of attention to what’s happening at the ground level,” says Jacquelyn West, who is in charge of Stackt’s arts programming. “Stackt creates a space for community to intersect and create those bonds that help us feel connected to the place we live.”