In 1968, a time when dance was barely a blip on the fringes of Toronto’s cultural scene, Martha Graham-trained choreographer/dancers Peter Randazzo, Patricia Beatty and David Earle started Toronto Dance Theatre (and the School of TDT). From surviving those precarious early days to next week’s innovative 50th anniversary program at Harbourfront, TDT has good cause to celebrate a half-century of creativity and perseverance.

1 The fledgling company received its first arts council grant in 1968, $1,250 from the Ontario Arts Council.

3 TDT was itinerant for years, for a time rehearsing above an auto body shop on Cumberland just down the street from the Pilot Tavern.

4 In the book Toronto Dance Theatre 1968-1998: Stages In A Journey by Nadine Saxton and Katherine Cornell, Peggy Baker (who studied at STDT) describes the founding company as “a little hippy tribe.”

6 Touring started early. The company’s first international performance was at The Place in London, UK, in 1972.

7 Founding dancer Susan Macpherson remembers getting paid $40 a week in the early years “when there was money in the bank. When there wasn’t, we worked anyway.”

8 TDT’s founders purchased the Winchester Street Theatre (affectionately known as The Winch) in 1978.

9 Founder dressing rooms were in the bell tower. In the unitard era (80s/early 90s), in-house costume designer Denis Joffre kept a wardrobe department in the basement.

10 The 1891 Romanesque Revival church has been an elegant, though financially challenging to maintain, base for TDT in Cabbagetown.

11 In 2009, the company and school finally assumed ownership of the building.

12 The company briefly suspended operations in the early 80s due to a crippling deficit. They re-structured and got back to the business of making art after about three months.

WHERE ARE THEY NOW?

13 Co-founder David Earle is a prolific choreographer known for the spiritual and emotional dimensions of his work. He ran TDT on his own from 1988 to 1994. Today he creates for Dancetheatre David Earle, based in Guelph.

14 Co-founder Peter Randazzo actually danced with the Martha Graham Company in New York. Best-known for whimsical dances like A Simple Melody (1977), he has left the arts entirely.

15 Co-founder Patricia Beatty, whose fundraising efforts shored up the company in the early years, made works like Against Sleep and Radical Light that are now considered classics.

16 Those works, along with revivals of pieces by Earle and Randazzo, can sometimes be seen at Toronto Dance Heritage shows in the fall and elsewhere.

17 Kenny Pearl, who ran TDT in the mid-80s, danced with Martha Graham and Alvin Ailey’s companies in New York City. He teaches at Ryerson and recently wrote The Dance Gods: A New York Memoir.

18 Born in Newfoundland, House joined the company as a dancer in 1978 and became artistic director in 1994.

19 He has now been with TDT longer than anyone else.

20 After watching his early choreographic work, New York dance critic Anna Kisselgoff once described House as “a formalist with a minimalist bent.”

22 Nest (2000) is widely considered to be a turning point in House’s practice and the direction of TDT. It was his first full-length choreography, his first using text, the first to overtly express an interest in visual art (by referencing Joseph Beuys) and the first collaborating with composer Phil Strong.

23 In Marienbad (2016), House and playwright Jordan Tannahill performed an athletic duet. As a performer House has slowed down a bit since hip replacement surgery, but not much – the pair is remounting Marienbad in 2019.

24 House was recently made a member of the Order of Canada.

25 Other accolades include three Dora Mavor Moore Awards, an honorary doctorate from Memorial University in St. John’s and the Muriel Sherrin Award for international achievement in dance.

26 House insists his fave award is Toronto Alliance for the Performing Arts’ (TAPA) Silver Ticket, which allows him to take a friend with him to any Toronto performing arts event until he dies.

27 House, who is notably youthful and fit, stays that way riding his bike all over Toronto. (Yes, he wears a helmet.)

28 What has kept House in dance for such a long time? “The people,” he says in an interview. “The many compelling questions about having a body and being a body, the astonishing poetry of the simplest gesture. Mostly the people, though.” 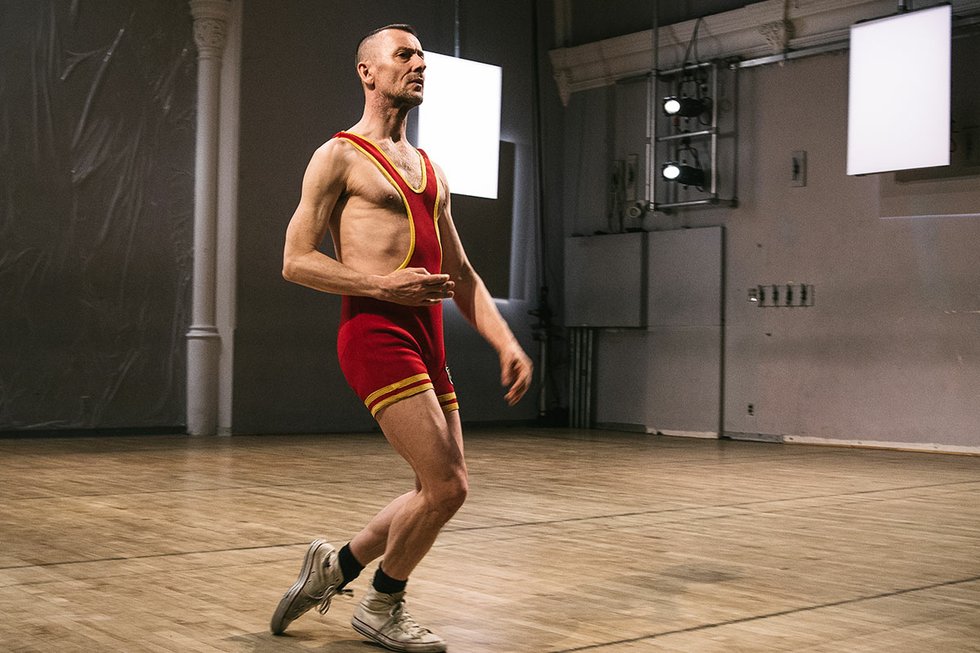 29 The company has had an extended mentorship with American modern dance pioneer Deborah Hay, whose methodology includes a contract requiring solo performers to run choreography daily for months.

30 One of the most-loved works in the Canadian dance canon, James Kudelka’s Fifteen Heterosexual Duets, was commissioned by TDT in 1990.

32 Though founded by Grahamtechnique devotees, the company is open to different types of movement. Indian dance icon Chandralekha made Namaskar with them in 1997.

33 In recent years, House and company have worked with the TDT repertoire as source material. Echo’s Object (2005) thus became Echo in 2016. Chiasmata from 2007 was re-calibrated in 2017. More than revivals, these works address the ephemerality of dance head on by embracing change and artistic growth.

34 Glass Fields, TDT’s 50th anniversary program at Harbourfront Centre from March 20 to 24, is a re-working of House’s Glass Houses from 1983.

36 The late Cree artist René Highway danced with the company in the 80s and is still remembered for his radiant stage presence – he’ll be inducted into the brand-new Canadian Dance Hall of Fame on March 25.

37 The late iconic actor Jackie Burroughs performed and took classes with the company (bare-legged) throughout its history. House remembers her puffing on cigarettes in the hallway between exercises.

38 TDT did an exuberant set of collaborations with Joel Gibb’s band Hidden Cameras in the 2000s. You Are The Same (2004) and In The Boneyard (2005) filled the stage with dancers and musicians grooving to each other’s gifts.

39 Folk singer/songwriter Jennifer Castle explored continuous movement as a state of being with Ame Henderson and the company for Henderson/Castle: Voyager in 2014. She also played the piano for every performance.

42 TDT’s dancers have used supplemental oxygen in two theatres: the Palacio de Bellas Artes in Mexico City (where technicians tending the canisters smoked while they worked!), and this fall at the Teatro Mayor in Bogotá, Colombia.

44 House generally watches each company performance (rarely missing one at home or on tour) from the auditorium. He sits with rehearsal director Rosemary James (who danced with the company in the 90s) and they each make notes.

45 Post-show notes to dancers take the form of feedback on choices made and on tendencies that seem to be crystallizing over a series of performances. The dancers then shake things up, keeping the “liveness” of the performance front of mind.

46 The company has long found a New York home at the Joyce Theatre. The mid-performance crossover there is up and down stairs and through the basement – for Handel Variations some dancers have to do this 10 times.

47 Alana Elmer is the longest-serving dancer in the current company she joined in 2004. Elmer also co-owns the vintage store Arsenic & Old Lace and is an independent film star.

48 TDT had its largest audience ever for the opening ceremony of the Pan Am Games in 2015.

49 Its most loving audience is likely out East, where they had universal standing ovations while touring Atlantic Canada this past winter.