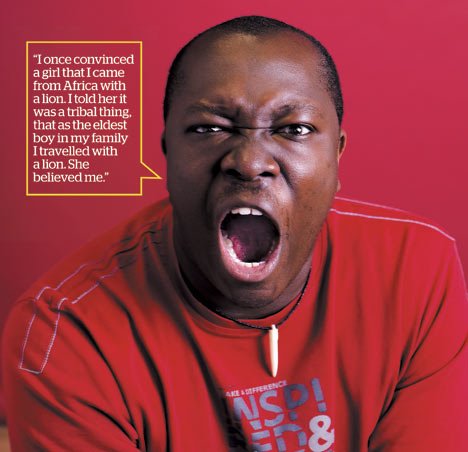 There’s a saying in the comedy world that it takes three years to produce 15 solid minutes of stand-up. Whoever came up with that idea should meet Arthur Simeon.

“That assumes everyone has the same life experiences,” says Simeon. “Pretty early on, I could give you 10 minutes about just getting off the plane in Canada.”

He’s not joking. Simeon was born in Kampala, Uganda, and came to Canada – to Peterborough, of all places – for university. He’d never heard of stand-up comedy until his mid-teens, never seen it live until he first came to T.O.

Not your typical route to North American comedy success. But great for seeing things just a little bit differently.

“When I was in university, I convinced a girl that I came from Africa with a lion,” he tells me. “I told her it was a tribal thing, that as the eldest boy in my family I travelled with a lion. She believed me.”

A large and imposing guy with a gentle streak, Simeon rolls his eyes at this, both indignant and amused. “She said she couldn’t wait to visit Africa to experience all that culture.”

Skewering ridiculous stereotypes is a huge part of Simeon’s act, and if things continue as they’re going – the guy did his first amateur set less than four years ago – could make him, like his friend and mentor, Russell Peters, the country’s next breakout global comedy star.

“It’s a blessing and a curse,” he says. “The blessing is that I sound different from everyone else. The curse is that people identify with me less than everyone else.”

But originality is hard to find in comedy. Watching Simeon deconstruct Western stereotypes about Africans (“all the jokes about us have to do with AIDS, clicking tongues or blow-darts”), you won’t confuse him with that generic white dude onstage talking about smoking pot. Not that Simeon doesn’t have a joke or two about getting high, but again, they come from an outsider’s perspective.

Last fall, after honing his act at regional Yuk Yuk’s clubs throughout the province, Simeon got a text message from Peters to help open up some shows on the second leg of his Canadian tour. He did two shows in stadiums of up to 10,000 each.

“I’d heard a lot of good things about Arthur before I had the pleasure of seeing him live,” says Peters via email. “When I did get to watch his act and hang out with him, it became very clear to me that he was the real deal. He’s just as naturally funny offstage as he is onstage. I hope he doesn’t get deported, because I don’t think Africa is ready for him.”

Simeon still can’t believe it all happened. He originally met Peters at a signing for the DVD release of Red, White And Brown “along with hundreds of people standing in line for an autograph.”

We’re sitting in Scallywags, a sports bar on St. Clair West where just a few years ago he used to write, hashing out material for amateur nights and open mics while drinking juice and watching European football on the TVs.

This was during his crash-on-the-sofas-of-friends period, right after moving here from Peterborough. Early on, he got encouragement from Jack Norman at Yuk Yuk’s Tuesday amateur night and Kenny Robinson, host of the Nubian Disciples of Pryor, who added him to the lineup after a no-show, then a month later promoted him from five minutes to 10, all in front of one of T.O.’s toughest comedy crowds.

“I loved the energy of the Nubian nights, because even though it’s an all-black comedy show, I wasn’t doing what the others were doing,” he says. “The room is heavily Jamaican, and as a whole they’re very proud and brash, very aggressive. So I became a little more aggressive just because I had to match them. They love that I don’t back down.”

Next week’s Kuumba Festival at Harbourfront should provide a similar battleground for black-on-black laughs. Simeon’s pitted against Jay Martin (from Jamaica), Marc Trinidad (Trinidad and Tobago) and Dwayne Landry (the U.S.).

“The African’s going to win,” he says with put-on brash ballsiness.

I say put-on because Simeon’s humility comes through onstage and in person. You can’t fake that.

When he first started doing Robinson’s room, he was modest and eager to learn – not because he knew about Robinson’s reputation (he’d also met Gerry Dee and didn’t know about his following), but simply because he was older.

“Culturally, Africans are taught to respect their elders,” he says, his accent providing a touch of formality. “Here in Canada, you respect your parents but not everyone who’s older than you.”

What Simeon does so well is communicate the disconnect between what he’s feeling and how he’s perceived.

In one clever bit, he talks about humming to a cheesy Katy Perry song on his iPod, much to the embarrassment of his friends, who expect him to be listening to hip-hop. How does he solve that? He choreographs an aggressive b-boy dance to hide the fact that he’s listening to a catchy pop tune.

“When I came here, there was all this pressure to dress and act a certain way,” he says. “I love hip-hop and listen to it. But growing up in Uganda, I didn’t just listen to hip-hop. I listened to disco. I grew up with three older sisters and knew a lot of Europop music that probably no black man of my age in Canada would know. I’m a huge fan of Ace of Base. Do you know them? Exactly.”

Now, when he talks to friends still living in Africa, he hears them using hip-hop slang they’ve picked up from music and movies.

“They don’t understand it. They misuse it, and that’s hilarious.”

Global comedy is where it’s at. Whatever you think of Peters’s comedy, says Simeon, he has completely changed the game.

“Everyone before him was doing it for a small market. Richard Pryor changed the game by bridging the races. Russell comes along and says, ‘What about Dubai or Australia?'”

It’s easy to see Simeon following in those big footsteps. Although his act is sprinkled with references to North Bay or Peterborough, those details could easily be altered. People all over the world know that Canada’s cold, right?

“What Russell’s done is create a blueprint for future comics, especially a comic like me who’s a global child. I’m from Uganda but I live in Canada.”

He pauses, considering the sacrifices he’s made – the bridge between where he grew up telling jokes at birthday parties to now, when he’s in hot demand.

“I almost never take off any time. My family’s still in Uganda, and it sucks. I work hard, harder than many comics. A lot of veterans get jaded about the business, say they’ve been doing it for X number of years. But I’ve learned that if you work hard, something will come of it.”

Simeon on his early comedy influences:

On Eddie Murphy, Ellen DeGeneres and being bitten by the performing bug:

On his first (aborted) amateur night:

On his Worst. Show. Ever.