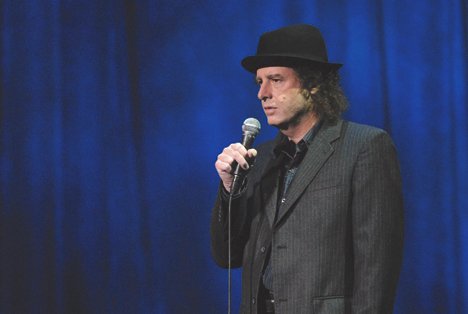 Funny thing about comedy legend Steven Wright. His bald-headed, monotone, sad-sack persona always made him seem older than he was – even at the peak of his popularity. So now that he’s comfortably settled into middle age, he appears to have aged well.[rssbreak]

Certainly, he’s all over the Internet, where Wrightisms – performed by him or not – abound. We’ll have a chance to see how well his surreal observations hold up when he does two nights at Convocation Hall this weekend. See Comedy Listings.

Are you tired of the headline The Wright Stuff?

Yes. Actually, I’m beyond tired I’m numb in regards to it.

A lot of comics mimic your style. Advice for them?

Trust your gut on your material, and try it out.

Where do you keep your Oscar [for best live-action short in 1989]?

On a table in my living room.

Thoughts on the late-night talk-show war?

I like everyone involved. There’s a lot of late-night talented people. I’d like to see Conan land somewhere else.

A lot of sporting events.

If you were just starting out in comedy, would you try the viral video route?

Yes, I probably would.

Tips for surviving the road?

Eating enough. And enjoying the audiences.