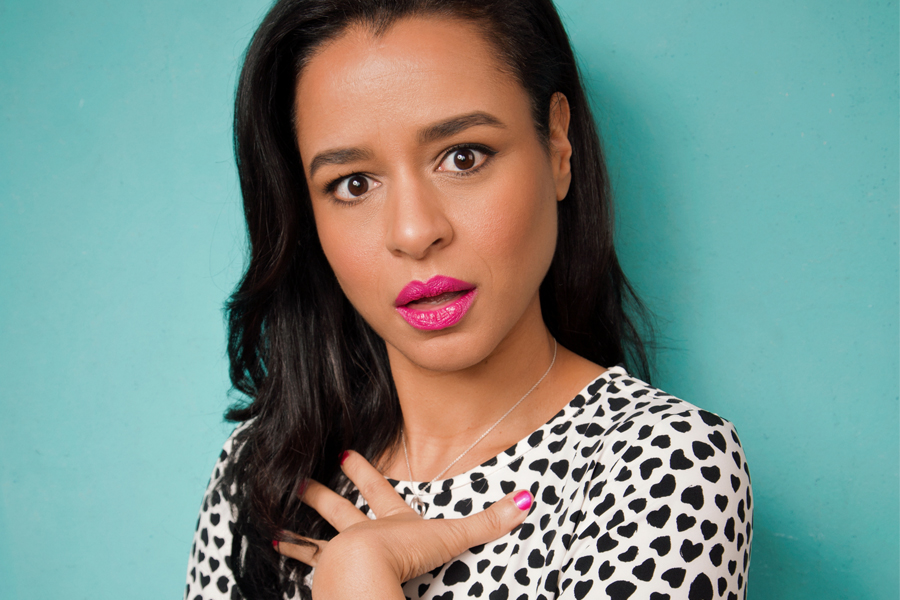 Thanks to her hilarious Trump lip-synch videos, Sarah Cooper's career is skyrocketing. But will her act affect what happens November 3?

Sarah Cooper is one of the few good things to come out of the pandemic. If her name’s not ringing a bell, I’m sure, like millions of others, you’ve laughed over her videos. You’ve probably liked them, replayed them and shared them with friends. But if you don’t recognize her name – or voice – all that’s about to change this fall.

Shortly after the pandemic hit, Cooper catapulted to fame with her TikTok videos lip-synching to Donald Trump’s inane comments.

There was the one in which she satirized his ridiculous theory that shining ultraviolet light into the body or injecting disinfectant could kill the coronavirus. Another featured Cooper-as-Trump blaming the rise in cases on testing. And when she recreated the 45th president’s comments about his love of the Bible (after the photo-op in which he held up the Good Book in front of a church near the White House), she captured every ounce of the man’s unique brand of narcissism.

She does all this without attempting to look like him. She’s a youthful Black woman; he’s an elderly, privileged white guy. In the videos she merely wears business attire.

“Some people have told me I should put on a red tie or wear a wig,” she says, “but that’s not my point at all. The point is that I look absolutely nothing like him. I don’t have the status and power that he does. But I’m saying the exact words that he’s saying, and I think that’s part of the reason these have worked – they highlight how ridiculous he sounds.”

It’s one thing to see Trump’s blustery self when he’s propped up at the podium, supported by acolytes. What Cooper brilliantly does is remove the trappings of the presidency and allow us to listen to the words themselves, filling in the subtext. She lets her eyes shift around desperately while he’s trying to think up something on the spot; she puffs out her chest when she’s trying to show dominance; she’ll occasionally throw in some random gesture to illustrate just how much contempt he has for his listeners.

She’s perfected the comedy of body language; what’s so tragic is that her blustery subject is one of the most powerful, and dangerous, figures in the world.

“For the entire time he’s been president, and even before, I think most of us knew he was this con artist who was able to fool a lot of people into thinking he knows what he’s doing,” she says. “But this was just using his own words, and using my performance to highlight [the subtext] is one of the reasons why people enjoy them. It’s almost a validating experience.”

In August, Netflix announced Cooper was getting a special, which she’s just finished taping. That same day Variety named her one of the 10 comics to watch in 2020. She’s part of the star-studded Just For Laughs Festival this October, in which she’ll take part in a Q&A.

“Natasha is just a powerhouse, a force of nature,” says Cooper about the special, which will consist of sketches, lots of cameos and commentary about what’s going on now.

“I’m not sure what this would have been without her. She just has an incredible vision, so it was amazing to work with her. And Maya has been a hero of mine for a long time. So to be able to work with her and have her produce it and be in it was just great.”

The logistics of taping something with coronavirus protocols in place was one of the biggest challenges.

“It was kind of a nightmare,” says Cooper. “There were a lot of regulations and a lot of rules and everyone wanted to be as careful as possible, because we didn’t want to be the production that had a star get COVID, which would ruin it for future productions.

“But everyone was so careful and we had a really great COVID team on set. It was frustrating, but we were able to get it done. It’s just kind of funny because the show is sort of about this weird moment in time we’re living through, and we were experiencing it at the same time as making the show. So that was a mind trip.”

Cooper’s happy about the acclaim, obviously, but admits she’s been doing stand-up for a decade and has written two books, 100 Tricks To Appear Smart In Meetings: How To Get By Without Trying and How To Be Successful Without Hurting Men’s Feelings, without achieving this kind of fame.

“It’s kind of shocking that I went from absolutely no one knowing who I was to Netflix giving me a special,” she says. “I feel like I could have done this before. It took millions of people watching my videos for people to give me a chance. It kind of highlights that the path to success in this business is not straightforward.”

Was she pitching shows before?

“Yes, and trying to get an agent,” she says. “I had just found a manager a few months before the pandemic hit. Even after the books, it was still difficult for me to break into the entertainment world. I’d kind of given up on that prospect when all of this happened.”

While honing her stand-up act in New York City at night, she was working during the day at Google. There, she learned the sorts of lessons that went into her two books; and no doubt she studied the behaviour of high-powered execs to learn to deconstruct Trump’s demeanour.

Cooper has said that as a Black woman she could never fake her way through a presentation the way certain white men can.

“In the tech world, there’s an emphasis on patterns,” she says. “So Mark Zuckerberg became very successful with Facebook and his signature was wearing flip-flops and a hoodie. That meant that later on, if you saw a white guy in a hoodie and flip-flops, and he had an idea for an app, you’d be more likely to think, ‘Oh, this could be the next Mark Zuckerburg,’ than if it came from someone who looked like me.

“That’s how it is in a lot of corporate environments. You see who the leader of the company is, and that becomes the image of success for that company. A lot of times people who fit that mould just kind of get away with not saying or doing very much and still being revered. Whereas people who don’t fit that mould have to work harder to get people to listen and trust them and give them leadership positions.”

Speaking of meetings, now that millions of people are working remotely and taking part in Zoom calls, does Cooper have any tips on how to spot the faker?

“It’s about the performance of listening,” she says. “That’s there in face-to-face meetings, but on Zoom it’s a lot more prevalent because you can’t interject as much. So you really have to perform like you’re excited and you’re enjoying this, like you’re really listening and taking notes. There’s a lot more performance involved. I think a part of it, too, is just seeing yourself onscreen; suddenly you’re very aware of what you look like.”

With November 3 just around the corner, politics aren’t just a laughing matter. At the Democratic National Convention, Cooper presented a video – both lip-synching to Trump and as herself – about the mail-in voting issue.

“I’m hoping people who have checked out of politics will check back in, and through the videos maybe see how dire the circumstances are right now and how important this election is,” she says. “These videos are an interesting intersection for me between news, politics and comedy. Because they’re so topical and timely, I hope they get people at least mentally more involved so they get up and physically go vote.”