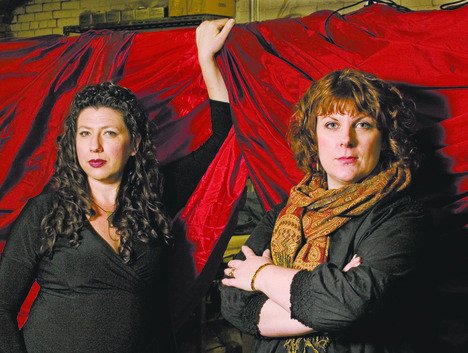 But even if you don’t know their names, you can’t forget the work of theatrical design magicians Tamara Marie Kucheran and Beth Kates.

Kates, whose work includes Bigger Than Jesus, Such Creatures and Assassins, takes on the task of transforming Theatre Passe Muraille into a temple for Yichud. Julie Tepperman’s play looks at the troubles of Rachel and Chaim, a shy, religiously strict couple whose relatives cause them wedding grief.

Kucheran had to adapt her set and costume design for the Berkeley Street production to the modern Bluma Appel.

“I used the Berkeley’s brick walls to suggest period New York,” she smiles, “but the Bluma is different. We’re going with large swaths of material, suggesting laundry hanging between tenement apartments. The brick is hinted at, but we’re relying on fabrics to link the scenes together.

“When I first designed the show, I hadn’t realized how Esther’s crazy quilt had subconsciously affected my design. That blend of social worlds, one flowing into another, echoes the quilt.”

The production requires both intimacy and sensuality, two things the Bluma doesn’t easily provide. Kucheran’s bringing the orchestra level up and pushing the action out into the audience.

“But Nottage’s description of fabrics – wools and embroidered silks shimmering with shot colours – is just as vital in shaping the show. Her sensual writing was a gift, offering clues about the show’s look.”

Kucheran, who’s also worked on The Drawer Boy and Black Medea, admits she became “a bit of a crow” in shopping for shiny materials.

“I couldn’t use a basic Chinatown golden dragon material that would be settling for just good enough.”

Kates puts the audience into the action from the moment we enter Passe Muraille as “wedding guests.” There are no theatre posters, no stage, no artists’ photos.

Instead, the women join the bride and her female relatives and friends, and the men are ushered to the balcony. We’re in a culture where the sexes are segregated for such events.

“It’s a joyful event, with a wandering klezmer band, singing and dancing,” notes Kates. This is one of the rare times she’s organized the entire production design alone.

“I want the audience to feel that they’re with Orthodox Jews up at Bathurst and Lawrence. It’s all kosher, so to speak,” adds Kates, whose own wedding and research provided material for the design.

Men and women can sit together for the play’s key scenes, but we’re sometimes shifted around to watch.

“A chorus of actors moves us through the transitions, in a sense wiping the slate clean to start the next scene.”

Because of the untraditional staging, viewers will have different experiences depending on their specific vantage points.

“I’m fascinated by the fact that everyone works at keeping the space alive throughout the show. In a sense, we follow in its wake, since the production is bigger than all of us.”