NOW MagazineCultureStage“Dim the lights of every Toronto theatre. Jon Kaplan is gone.”

“Dim the lights of every Toronto theatre. Jon Kaplan is gone.”

Since Friday, when we shared the terrible news that our beloved senior theatre writer had died, we've been flooded with tributes, memories and love in honour of Jon Kaplan. Thank you, Toronto. 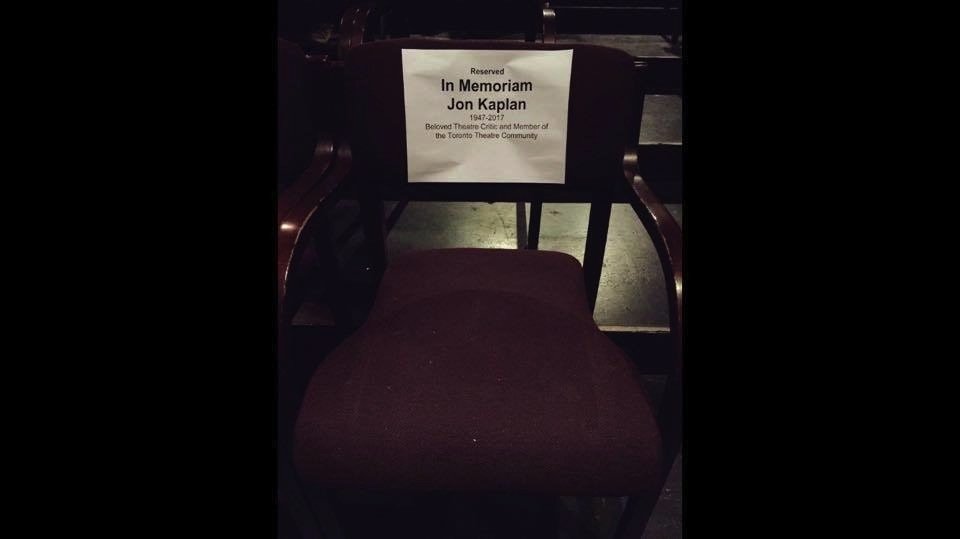 On Friday, we broke some very difficult news: our beloved senior theatre writer, Jon Kaplan – who wrote for NOW Magazine for as long as it’s been in existence – had died.

But fittingly, almost immediately tributes began flooding in over the weekend and they continue to arrive. This morning, Metro Morning’s Matt Galloway interviewed playwright Michael Healey about Jon, who remarked, “His method of engaging with our art form flowed directly from the fact that as a person, he was a generous man and a curious and considerate and careful individual. For 35 years, he watched us and spoke to us and reflected us in a careful, thoughtful, generous and supportive way and everybody – everybody that I know – was appreciative of the way he engaged with us.”

Tomorrow night, the Royal Alexandra, Princess of Wales, Ed Mirvish and Panasonic Theatres will dim the marquee lights in honour of Jon Kaplan. Across the city, a single seat was reserved in countless theatres in tribute to the critic, who was known for seeing both shows he didn’t have to write about and shows he adored that he’d already seen – all in the name of nurturing the community.

There is a consistent theme to these outpourings. Jon’s intention was to foster the city’s theatre community by providing feedback to shows that would always encourage its creators to keep writing, rehearsing and performing.

“One of the key words I think about with every show I go to is ‘respect,’” he told Allegra Fulton, in a gorgeous profile of Jon in Intermission Magazine. “It’s important to respect an artist who has spent weeks, months, years working on a piece. To simply dismiss it in five hundred words is horrible and unfair. Too often these days there’s a thumbs-up or -down attitude and that’s not my nature.”

Judging from the outpourings below, sourced from online comments and social media, Jon achieved that and so much more.

“I met Jon and his parents shortly after he arrived in Toronto. We were in graduate seminars together at York at the time. He immediately struck me as a warm and considerate mensch. Over the years we would bump into each other at theatre performances and reminisce about those early years at York. He always had a kind smile with each greeting. His insightful reviews and genuine personality will be missed.” – Michael Greenstein

“Jon, I first met you in 1981 at York U and I have had the great honour to have made your acquaintance. You were kind, smart, funny, caring and had the most invincible integrity. I would look forward to Thursday to read your columns on theatre. You have done so much for Toronto and the arts scene. You will be missed by so many.” – Richard Paul

“My long-time friend and mentor, Jon Kaplan, has passed away. I am heartbroken. Thirty years ago, Jon took me under his wing when I was a young actor and shared the world of Canadian theatre with me, taking me to shows and gifting me with his encyclopedic knowledge of theatre. He was a great champion of of Toronto’s theatre community and the most kind and gentle soul. I will miss him dearly.” – Gil Yaron

“Jon transformed and fortified our theatre community in Toronto with his wise words, loyalty and friendship. He made us excited about each other’s work, with his own passion and knowledge. He faced this illness with such courage. This is too sad.” – Maja Ardal

“I knew Jon briefly when I worked as a theatre writer for Eye in the 2000s. In the lobby, we never talked about the plays, but he always said hello and chit-chatted a little to me and my partner. It was a pretty slight, brief relationship – but I’ll never forget his smile and warmth. Regardless of what the show was like, he always had this remarkable inner glow. I’ve always aspired to feel as happy as Jon looked like he was.” – Paul

“Jon was so smart and kind and generous. Getting to have an interview with him was like the final piece – the deep-dive – before opening. I always came away with a greater understanding of the art we were creating. I am so grateful to have known him. Thank you for this loving memorial.” – Holly Lewis

“Whether you were the director, actor, box office staff or volunteer, Jon treated everyone with the utmost respect and was really just a total gem. He will be missed.” – Danielle D’Ornellas

“Jon was such a positive and loving force in what can be a competitive and cynical industry. We should all take a page from his book: smile, love, be there. I think of Jon, how he championed me when I thought i had nothing to contribute. He will be missed. I’m crestfallen by this news. He had a more profound impact on me than he’ll ever know.” – Tim Walker

“I am a secondary school drama teacher and many many years ago, my students’ original play was chosen from the Sears Ontario Drama Festival to participate in SummerWorks and a well-known critic wrote a scathing review after their opening night. These were young people and they were left heartbroken not wanting to perform again. Jon immediately came to see the play and wrote a kind, generous, fair review giving them three stars. I had never met him but I never forgot what he did and always sought out his reviews after that. Thank you, Jon, for being so supportive of young artists.” – Wendie

“He took the time to see everything, even student plays. How remarkable.” – Laurie Veitch

“I had Jon to my class a few times at York, and he always brought his particular brand of joy and knowledge for those coming behind him. He made a large contribution to our theatre community and will be sorely missed.” – Kym Bird

“The first review of my first professional one-man show at SummerWorks a few years ago was written by none other than Jon Kaplan. I have his review in a drawer with all of my other reminders that a life in theatre is a worthwhile pursuit if for nothing else than to know what somebody, somewhere felt something because of what you did.” – Shawn DeSouza-Coelho

“The last time I saw Jon, we ate quiche. He took me to his favourite cafe, told me (gently) which quiche to order, and updated me on his illness. He had to get over his natural tendency to not talk about himself, because he wanted to fill me in on his treatment. When Jon talked about himself, it felt like a gift. He was such a generous man, even the way he handled his illness was generous, reaching out to the community he loved. He loved us, and we felt it, right to the end.” – Niki Landau