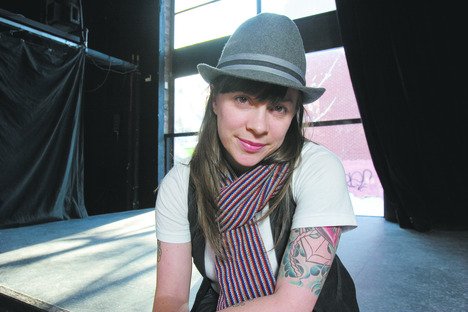 There’s nothing like chomping into a fresh batch of Rhubarb to add flava to the bland winter.

This year’s crop is exceptionally tasty, with contributions by local scenesters like d’bi.young, Chris Dupuis, Jonathan Heppner and David Tomlinson, a music series and a spotlight on New York-based artists like Neal Medlyn, Glenn Marla and Karen Bernard. Check out the whole three-week series at artsexy.ca and follow nowtoronto.com for updates. See Listings, page 60.

At 31, you’re Canada’s oldest and largest new works festival. How are you liking your 30s?

Rhubarb benefits from a long-time and loyal audience as well from a younger and newer audience. The heart of the festival hasn’t changed and will always remain youthful. So in our 30s we are more sure-footed, stronger and calmer, but we still love a good party.

Are there some things you can’t do any more?

No. We can do any crazy thing we want. Risk and innovation are at the centre of what we do.

A couple of years ago, you dropped the “!” at the end of Rhubarb. Why?!

So that Rhubarb can be whispered as well as a shouted.

I reject the idea that New York artists are somehow “living the dream.” They struggle to survive and to make work and have it seen. Because New York has a very developed queer performance aesthetic, there is rich conversation to be had between the two cities, and Rhubarb is a good place for that conversation.

Any two shows going up against each other that will cause audience anxiety about which to choose?

The whole schedule is designed so that you have to come back another night (or two). There’s no way to catch everything in one night. Each show is unlike anything you’ll see anywhere else. Just get a festival pass – they’re insanely cheap at $60 for a three-week pass or $25 for the week. I can’t do the Sophie’s Choice thing – I love them all equally.

I wonder what a stalk would be like in a Caesar. But don’t ask Patricia to make you one, for god’s sake.

If the sleeping TTC guy came to Rhubarb, how would you entertain him?

I’d send him to Out of Line Theatre’s show, Le Petit Mort, from Winnipeg. They’re insane! Or to Ulysses Castellanos’s Teddy Chainsaw Massacre. Let him watch innocent teddy bears torn apart with a chainsaw – that’ll wake him up.

Definitely the old straight white guy. My money’s on him.

Can you drink beer while you watch Avatar? Exactly.[rssbreak]