Plus, it’s time to start thinking about and celebrating next summer’s Fringe Festival 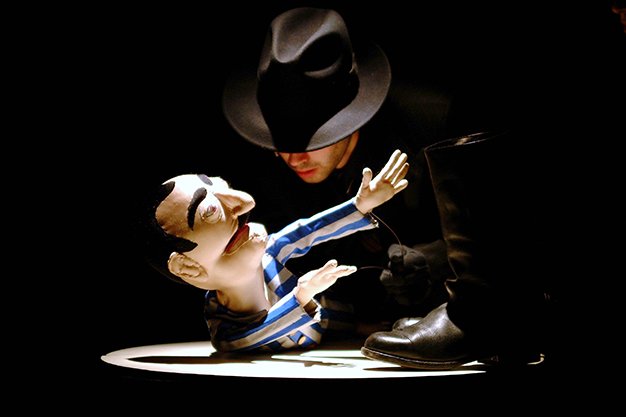 Many real-life Holocaust stories have been dramatized, but few have a Norwegian setting. That’s one of the novelties of Wakka Wakka Productions’ Fabrik: The Legend Of M. Rabinowitz. The other is its innovative use of puppets.

The show, which finished a run at the Toronto Centre for the Arts (and coincided with Holocaust Education Week), tells the story of Moritz Rabinowitz, a Polish-born Jew who emigrated to Bergen, Norway, and settled in Haugesund in 1911, prospering from peddler and clothing store owner to national apparel manufacture company owner.

During this time, he married, had a child and was sensitive to the rising anti-Semitism in Europe. Eventually, when the Germans invaded Norway, he was captured, deported and beaten to death in a concentration camp. None of his family survived the war.

There are some big gaps in the storytelling of this one-hour show, and some fantasy sequences aren’t sufficiently set up for us to get the total effect.

But there are some stunning sequences, including gently humane ones involving Rabinowitz’s wife, who’s lonely and friendless in the Nordic town, and his daughter, Edith, delightful in a scene in which she shows off her ballet moves for her dad.

And there are disturbing scenes of Nazi abuse, including one in which a concentration camp victim is asked to deliver a stand-up routine with the grimly dark line, “Take my wife, please – no, you already have.”

The use of cat-and-mouse/rat imagery, familiar from Art Spiegelman’s work but with a historical basis as well, is powerful.

And the scene in which Rabinowitz meets his death from a pair of disembodied black boots is horrific.

The show could be tightened and edited, but its message, beautifully delivered by actor/puppeteers Peter Russo, Kirjan Waage and Gwendolyn Warnock, is an important one.

Jordan Tannahill is the winner of the 2014 Governor General’s Literary Award for drama (English-language).

He was nominated for Age Of Minority: Three Solo Plays, published by Playwrights Canada Press. All three of the scripts – Get Yourself Home Skyler James, Peter Fechter: 59 Minutes and rihannaboi95 – have been seen in Toronto, the last as an online play that won a Dora in 2013.

It’s the latest in a series of honours for the playwright/director/filmmaker, who with his partner, William Ellis, co-runs Videofag in Kensington Market. He previously received the Inside Out Film Festival’s Emerging Canadian Artist Award, the Ken McDougall Award for Emerging Director and the Enbridge playRites Award.

Tannahill’s currently the Urjo Kareda Resident at the Tarragon Theatre and recently produced, through his company Suburban Beast, another stellar show, Concord Floral.

Other finalists for the award were Rick Chafe (The Secret Mask), Sean Dixon (A God In Need Of Help) and Janet Munsil (That Elusive Spark).

The recipient of the French-language GG is Carole Fréchette for Small Talk. We’ll probably see her work in English translation within the next few years.

It’s time to start thinking about and celebrating next summer’s Fringe Festival.

The general applications are in, and the lottery party to choose the 2015 participants is Friday (November 21) in a venue full of Fringe history, the Tranzac Club. The doors open at 6 pm, draw at 7 pm.

There’s no admission fee for the draw, which will allow you to see whether you or your friends got in. In addition, there’s free cake and a cash bar.

The winners of the juried New Play Contest will also be announced.

And you can celebrate or drown your sorrows – whichever is appropriate – at a pwyc party following the draw. There’ll be more cake, a DJ and free nibblies.

Down with queer bullying

It’s rare that plays directed at teen audiences deal with queer themes, so we applaud Roseneath Theatre, one of Canada’s most important producers of shows for young audiences, for its final production of the season, Outside.

Set to tour provincial schools in the spring, the play has a one-night reading and funder Wednesday (November 26) at Buddies in Bad Times.

Written by Paul Dunn – remember his fine work as one of the trio of writer/performers in The Gay Heritage Project? – the play looks at a teen dealing with homophobic bullying and also the importance of Gay-Straight Alliances in high schools.

The evening also features pre-show catering, opening remarks by PFLAG and a post-show Q&A with the creative ensemble.

Tickets are $20, with free admission for those under 25.

Ralph + Lina, a charming two-hander written and performed by Dan Watson and Christina Serra, makes a brief return engagement to the Theatre Centre this week, a co-pro between Ahuri Theatre and the Theatre Centre.

We thought highly of the show when it premiered last spring as part of a triple bill of physical theatre. Based on the story of Serra’s Italian grandparents, forced apart by the Second World War before they moved to Canada, the work’s success comes in no small part from the actors themselves, who are a couple offstage as well as on.