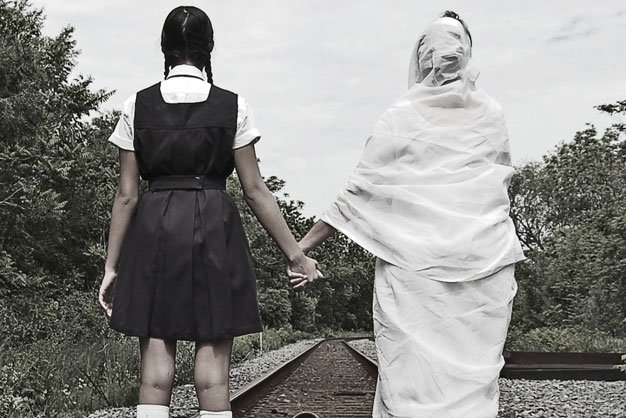 Tracing a journey that continues over a century in time, spanning three continents and looking at five generations of an extended family, Rukmini’s Gold considers what is ultimately important in life.

Each of its 10 scenes is set in a train station, in countries as disparate as India, England, Uganda and Canada.

“I’ve travelled across so many continents on trains,” recalls playwright Radha S. Menon, whose earlier show, The Washing Machine, was part of the Fringe’s 2012 Next Stage Festival. “And the trips are much more than a move from one location to another. Journeys can be metaphoric as well as real, for travellers are always embarking on a new part of their lives, with a hope of adventure, work or whatever.”

Rukmini’s Gold – winner of the 2015 Fringe New Play Contest, sponsored by Exclamation Foundation – grew out of a vision Menon had in a rural British train station of an old woman in a white sari carrying a bag and waiting for the London sleeper.

Was the train ever going to come, she wondered, or had she missed it? She became the character of Rukmini, who meets a young girl full of boundless energy and joy in life. The girl has some surprising knowledge about the more timid woman.

“Rukmini has something to learn from the girl, as the aged character holds onto experiences that make her bitter, sad, angry and disappointed. She has to learn to move on.”

The show began life as a 20-minute work, part of the Hamilton Fringe Gallery Series, where it was called Ghost Train Riders. Now it’s a full-length piece whose development was helped by Kali Theatre, a London, England, company that promotes the work of South Asian women.

Its characters aren’t all South Asian, however there are Brits and native Canadians as well as other figures.

“Despite the cultural aesthetic and content, the story is universal. Everyone has to face their own mortality and that of those they’re close to, how to prepare, to find the right position for a new birth.

“Just as importantly, we all have to discover what is truly golden in terms of lasting wealth.”