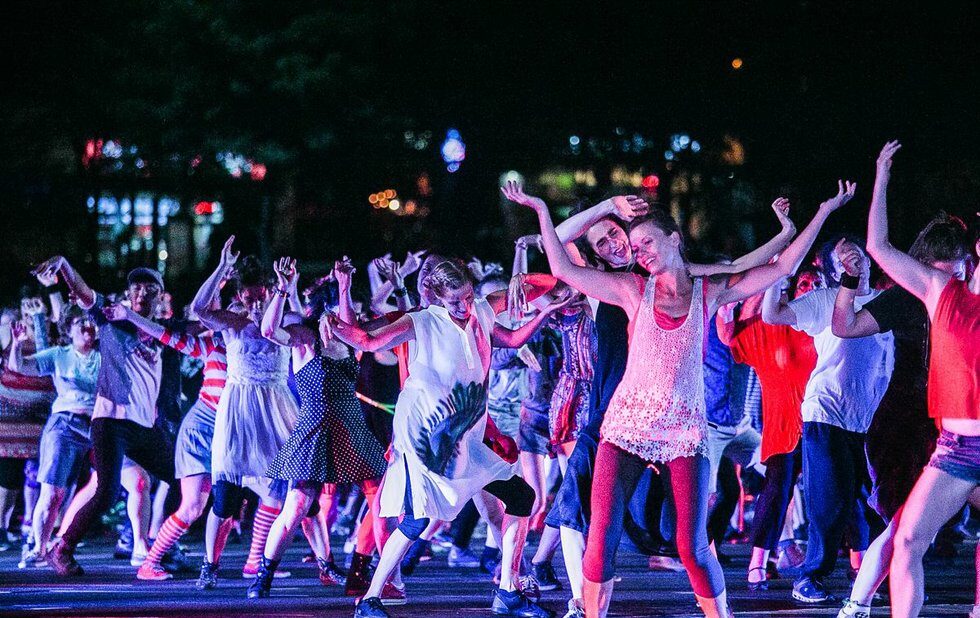 Choreographer Sylvain Émard’s large-scale outdoor dance work Le Grand Continental has been charming audiences around the world since its inception as a Montreal one-off in 2009.

Inspired by a life-long fascination with line dancing, Émard’s work has blossomed into a feel-good touring project that recruits hundreds of local participants to learn a 30-minute choreography and perform it together in public.

It’s been mounted in Mexico City, Potsdam, Boston and Santiago, to name just a few locations. In Toronto, 220 brave souls (most of whom have no dance training) made the cut to perform it in Nathan Phillips Square for Luminato.

“We always audition way more people than we need,” Émard explains. “When rehearsals start and people realize that there are three more months to go, and they can’t miss a rehearsal, and it’s much more work than they thought, some drop out.”

Those who go the distance embark on a journey of perseverance and self-discovery. In Toronto, rehearsal director Bonnie Kim and 13 other local dancers teach participants choreography that can be challenging, to be performed in all weather, surrounded by an audience on all sides.

“This process with a large group has to be very efficient,” explains Émard.

“I have to be very well prepared and there’s not a lot of place for improvisation.”

Wherever possible, Émard creates unique choreographic content for each location. In Toronto, he is using a commissioned score by Wolf Saga for a finale section that honours the city’s energy and impressive skyline.

Efficiencies aside, Émard says he is not trying to get Grand Continental participants to dance the same way, and acknowledges that the diversity of the Toronto group in age, body type and physicality renders that goal impossible in any case. He sees it as one of the work’s strengths.

“It’s very moving to watch people dancing the same thing while expressing who they really are. They’re not hiding, they’re revealing. I can be very specific with my professional dancers, but with non-professionals the lack of precision is the beauty of it. I’m not saying they don’t work hard – they do, but they’re doing what they can.”

Some of the things Émard asks the performers to do – like shake all over and then fall to the ground – are routine for professional dancers.

“But for someone who’s never done it,” says Émard, “it’s challenging. I see the people so happy leaving rehearsal, exhausted but smiling.”

If the international mega-success of Le Grand Continental has taken Émard by surprise, he also didn’t anticipate that getting non-dancers to perform his choreography would so deeply impact his own artistic practice back in the studio.

“It has reconnected me with something essential,” he says. “When you’re working with big groups of people who are there simply because they love to dance, it’s very refreshing. It’s been so great to be reminded of the simple idea that we’re doing this because we like to dance. Period.”

Le Grand Continental, an exercise in collective and personal endeavour, also has a political dimension, however unintended.

“I think bringing people together on a public square dancing together and showing their joy of dancing and sharing their passion can be political,” says Émard.

“I just got back from doing the work in Germany and tensions are quite high there, as they are globally. To take back public space after… well, here, too, after what happened a month ago on Yonge Street [and the van attack] is very significant. The work offers a certain vision of humanity.”