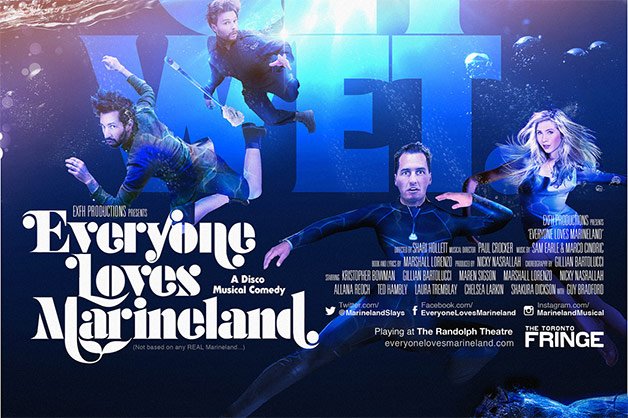 Hold on to this! It could be worth something someday!

Let’s explain: for the second time this month, a musical parody at the Toronto Fringe festival found itself the subject of a cease-and-desist letter from the subject that it’s spoofing. Two weeks ago, Deadmouse: The Musical got on the wrong side of deadmau5, and today a show called Everyone Loves Marineland got a c-and-d from the Niagara Falls attraction deadmau5 once mused about purchasing.

The Deadmouse musical matter was quickly resolved when the show added a disclaimer to emphasize that it was an unaffiliated send-up. Everyone Loves Marineland, on the other hand, has gone so far as to change its name to appease the controversial company known for fiercely pursuing its critics.

The musical, which opens at the Randolph Theatre on Friday, is now titled Everyone Loves Sealand, and the script will be similarly amended to reflect the new definitely-not-Marineland marine mammal park at its centre. The book and lyrics are by Marshall Lorenzo, the music is by Paul Crocker, and it’s directed by Shari Hollett (sister of NOW Magazine editor/publisher Michael Hollett).

“At the end of the day, we want people to see the show,” writer Lorenzo tells NOW, characterizing the decision as a “compromise.” (He says “Sealand” is spelled as one word, but the blurb suggests there’s not yet consensus on the point.)

He explains that Marineland’s letter, addressed to the Fringe, expressed concern that they didn’t know what the show was about and so asked the production to cease and desist until they had more info. “So we gave them some information, and we just talked about a name change. And so they were happy with that.”

All the printed materials, including the house programmes, already have the original title, but online listings are being updated. “It sucks that people may search for ‘Marineland’ and not find any results,” Lorenzo says, “but I think we’d rather that than have to pull the show or anything.”

“We kind of knew going in that it was a risk, but I was hoping that they might be more open to a dialogue,” he laughs.

Still, he’d like to squeeze a joke out of it. “One thing that we all did agree on is that the name ‘Sealand’ is incredibly dumb, so that works to our benefit.”

A call to Marineland was not immediately returned.