NOW MagazineCultureStageMedia finally get their invite to the Wedding

Media finally get their invite to the Wedding 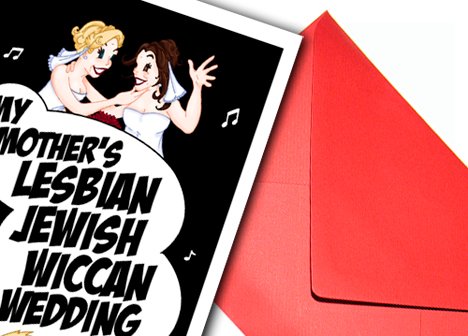 I’m finally invited to the Wedding and allowed to witness Stuff Happening.

A couple of weeks ago, Mirvish Productions said they were rescheduling their media nights for their Fall 2009 shows My Mother’s Lesbian Jewish Wiccan Wedding, Stuff Happens and Fiddler On The Roof.

Maybe I should explain what media nights are.

They’re generally scheduled for members of the press to see a show and – so the theory goes – generate buzz. Often they’ll include a red carpet for celebrities and tastemakers, as well as an opening night party. This is generally when critics attend, filing their reviews based on that performance.

Even if a show’s been running for weeks, this media night will officially “announce” that the work is ready. Artistic and technical glitches have been ironed out. If it’s a touring show, the artistic team has got used to the new hall, etc.

The original media nights for MMLJWW and Stuff Happens were November 15 and 22. But in a strange email on November 13, a publicist from Mirvish informed us that media nights for all three shows would “not be on the dates previously announced. New dates are TBA.”

Why? Many of us wondered. Were the shows not ready? Did the commercial theatre company, careful in these uncertain economic times, want to coast on the wave of good reviews that both shows had got in earlier incarnations, and not gamble on critics changing their minds?

We waited. And we waited. No word.

Then three days ago, on November 21, we received word via email that the media night for MMLJWW was reslotted for December 10 and that Stuff Happens was happening December 4.

This made little sense. The former had been held over and was scheduled to close on December 13 – why have a media night for a show that would run for three more days? And non-reviewing members of the media received an invite to the latter for November 22. Obviously the show was “ready” for some pretty influential people… so why no reviewers?

We were beginning to feel unwanted. Still, in a city with a huge performing arts scene, there’s no lack of shows to review. Stuff happens indeed. You dis-invite us? We’ll give space to the other dozens of shows crying out for reviews. Which we’ve done here at NOW over the past couple of weeks.

So it’s no coincidence that yesterday afternoon, David Mirvish himself sent out a formal letter addressed to “friends in the media” apologizing for “delaying or changing media nights” for the shows. The letter outlines their policy regarding media nights and types of shows (reproduced below).

As for the theory that Mirvish doesn’t want to gamble on bad reviews, director of publicity John Karastamatis says it’s simply not true.

“We don’t always get good reviews, it’s the luck of the draw,” he said in an interview yesterday, after the official Mirvish release had gone out. He points out the “middling to bad reviews” that We Will Rock You originally received, but that word of mouth was so good that it helped support the show.

And why invite the media to MMLJWW three days before closing? (It has since been extended to January 3, 2010).

“We knew about the January 3 extension,” says Karastamatis, who incidentally was one of the Mirvish employees who saw MMLJWW at the Fringe and was instrumental in bringing the show to David Mirvish’s attention, just as he helped another Mirvish hit, The Drowsy Chaperone.

“Back in October, if you looked at our website, you could buy tickets up till January. It was a way to subload the run, because people, if given the chance, will wait till the last minute to buy tickets.”

NOW’s reviews of the shows will appear shortly after the new media nights.

1) In the case of touring productions that have already played other venues, media nights are to be on the second or third evenings of local performances.

2) In the case of touring productions breaking in new cast in one of our theatres – and in our theatre for five or more weeks (as is the case with the upcoming Fiddler on the Roof) – we will hold media nights during the second week of performances, and under no circumstances later than the third week.

3) In the case of productions transferring from another theatre to one of ours, but not touring (as was the case with the recent The Boys in the Photograph), media night will be set within the second week of Toronto performances.

4) In the case of wholly new productions, originating in one of our theatres, we will hold media nights within the fourth week of performances, but no later than the fifth week.

Note: If there is ever any reason why we are forced to vary from this policy, rest assured that we will endeavour to give you plenty of advance notice. [rssbreak]