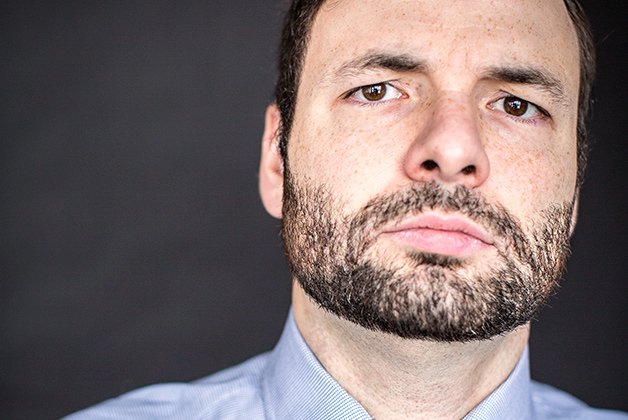 Nicolas Billon is a political playwright, but he doesn’t want that to scare you away.

In fact, he’s the first to be suspicious of didactic or heavy-handed theatre.

“I have no patience when I go see a play and feel I’m being hammered over the head,” says the soft-spoken writer. “I immediately lose interest. If I see another play about how not all Arabs are terrorists, or how gay people are this or that…” he pauses. “I know! I totally agree! I’m on board! And you know what? A theatre audience also knows this. It’s too easy to preach to the choir. It’s much more interesting to explore the grey areas.”

His plays – among them the monologue-driven trilogy of Greenland, Iceland and Faroe Islands, which under the title Fault Lines recently won him the Governor General’s Award for drama – revel in shades of complex grey.

Greenland deals with a family torn apart by a fatal accident Iceland looks at how the lives of three Toronto strangers are linked through the economic collapse and Faroe Islands takes on armchair activism.

Billon sees a similarity between this last play and his newest one, Rifles, which premieres this week at the Next Stage Festival. An adaptation of Brecht’s 1937 play Señora Carrar’s Rifles, it’s set during the Spanish Civil War, where a mother struggles to keep her two sons from fighting after her husband has been killed.

“One of the themes of Faroe Islands is the idea that if you sign an online petition you’re suddenly an activist, which drives me crazy,” says Billon in the quiet-between-Christmas-and-New Year’s lounge of the Toronto Writers’ Centre, where he gets most of his work done.

“Rifles suggests that to be an activist you actually need to act.”

Brecht’s in-your-face style and Billon’s subtle, nuanced writing might seem an unlikely pairing. That’s what Billon told director Michael Wheeler when the latter approached him about adapting the play.

“I said I wasn’t his guy,” he says, chuckling. “Brecht and I aren’t a good match. But Michael told me to read the play, and it was very different from his other stuff. You can still hear his axe grinding, but it’s muted. And that was intriguing.”

Another selling point was the Spanish Civil War setting, because his literary hero George Orwell fought in it and chronicled his experiences in the classic Homage To Catalonia.

“I asked Michael if we could somehow bring Orwell into the play, and it turns out there’s a wounded soldier in the Brecht play. We’ve made him Orwell, who was in fact wounded, and here he becomes an observer and witness.”

If Rifles pans out, Billon would like to develop the work into a longer piece, with a prequel or sequel dealing with Homage To Catalonia.

Billon let me read an early version of his script, and there’s a line of dialogue that refers to 2 + 2 = 5. Aha, I thought: a reference to Orwell’s classic about a totalitarian dystopia, 1984.

“Nope, it’s Brecht!” cries out Billon, his eyes widening. “When I saw it I almost fell off my chair. It made me think maybe Orwell had read or seen the play. The expression itself was probably not coined by Orwell or Brecht, but to see it in the context of fascism is eerie.”

Billon, who grew up in Montreal and came to Toronto in 2006 to join the Soulpepper Academy, has adapted classics before.

He penned a clever version of Molière’s The Sicilian for the Fringe Festival a few years ago, and his stylish spin on Marivaux’s The Game Of Love & Chance was mounted by Canadian Stage and Montreal’s Centaur Theatre.

“It’s nice to work on a comedy every now and then,” he says, smiling. “I don’t always want to be doing heavy and dark pieces. But these were still political they’re all about class. There are very few experiences as satisfying as being in an audience that’s laughing.”

One character who got lots of laughs – albeit dark, sardonic, half-guilty laughs – was Halim, the slimy, sexist, opportunistic realtor played to perfection by Kawa Ada in Billon’s Iceland.

Billon credits Ada for earning that reaction. And he also says director Ravi Jain realized early on that audiences needed to agree with Halim more or they’d turn against him.

When Billon donated $5,000 of his Governor General’s Award prize to the Theatre Centre, he says he was acknowledging Jain’s contribution to all three Fault Lines plays. Jain is a director in residence at the Theatre Centre.

“Meeting him was a life-changing experience,” says Billon. “We did a workshop together with Complicité and immediately got along. I don’t think anyone doesn’t get along with Ravi he’s one of the most affable people I know.

“I also saw his Hamlet, and while it was by no means perfect – he’d say the same thing – he was doing something compelling. I hadn’t seen that kind of ballsiness onstage in a while. I knew I had to work with him.”

Filming on The Elephant Song, Billon’s adaptation of his first play, has just finished, with Xavier Dolan, Bruce Greenwood and Catherine Keener in the cast.

And productions of his play Butcher and his opera October – about Quebec’s October crisis – are in the works.

He and Praxis Theatre artistic producer Aislinn Rose were married on Christmas Eve day in a casual 20-minute ceremony followed by a diner breakfast. Rifles marks their first collaboration as writer and producer. Will they be working together more?

“I think we’ve agreed that it’s not something we’ll do on a regular basis,” he says. “Sometimes working on this, we’ve had to ask each other what hat we’re wearing: producer, writer or spouse.”

And they’ve agreed to keep their private and public lives separate – which has worked surprisingly well up until now.

“After we got married,” he says, “some people in the community admitted they didn’t even know we were going out.”

Billon on his admiration of George Orwell:

On adapting classics and working on a text in a “forensic” manner:

On collaborating with artists who ask great questions: