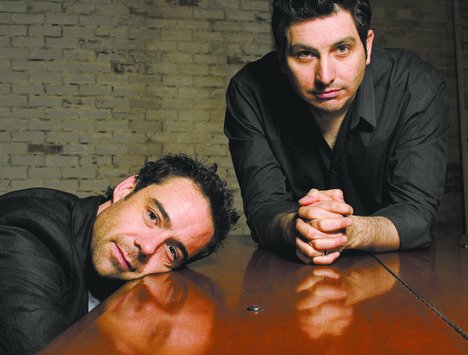 Soulpepper, known for its staging of theatre classics, moves in a new direction with Civil Elegies.[rssbreak]

The material is rooted not in theatre but in the poetry of Dennis Lee, famous for his children’s book Alligator Pie.

Lee’s 1972 GG winner, Civil Elegies, inspired musician/performer Mike Ross and designer Lorenzo Savoini to collaborate on a stage piece about what it means to be Canadian and to live in Toronto.

The production will surprise those who attend Soulpepper productions of Odets, Shakespeare or David French.

“The idea came to me a decade ago,” recalls Ross, “when I was developing a song. I needed simple verse to stand in for words, and I picked up a Dennis Lee book to find some text.

“But the song had a life of its own, and I couldn’t find words that worked better. I tried it with another song, and the project snowballed. I became passionate about finding the right Lee poem to fit the music I was writing.”

Jump forward a number of years, when Ross had composed about 40 songs to Lee’s poetry. He and Savoini bonded in the Soulpepper Academy, sharing similar tastes. Through a member of Soulpepper’s board, Ross met Lee and played him the songs. Lee loved them.

Ross started to think about a theatrical context for the material and asked Savoini to come on board. When they read Civil Elegies, they knew they’d found the production’s linchpin. Spoken text comes from that collection, while the songs draw on other works, including the kids’ books.

“I was attracted to Dennis’s attempt in Civil Elegies to engage readers or listeners in thinking about their city and their place in the city, as well as in the world,” says Savoini, who’s designed for both Soulpepper and Stratford.

Earlier that day, I’m sitting in the rehearsal hall with Ross and director Albert Schultz as they talk about the journey that Ross’s character .

Schultz helps Ross analyze the text, finding its clarity and flow. The director’s background in the Bard is helpful in locating where thoughts begin and end and what to emphasize.

Occasionally joking between themselves, drawing me into the conversation, the pair mention that Lee had come to rehearsal the week before and changed two words in his poetry. The changes were throwing Ross off a bit, since he’d already memorized the text.

This is a show where the visuals are as important as the words. Savoini calls his contribution “visual storytelling,” which draws on the imagery and narrative.

“I want to get out of the way of the words but still give the show a theatrical language. Neither of us wanted Mike to go out and read the poetry. Mike owns the words as his character’s thoughts, and we want to frame them theatrically.

“This piece can release an audience’s thoughts and feelings,” adds Ross. “If we do it right, it becomes more than the sum of its parts.”

On being part of a meaningful city: