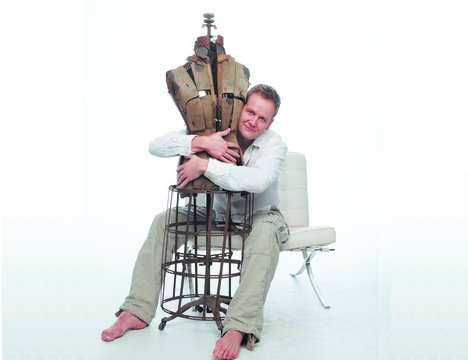 Before he goes onstage in Caryl Churchill’s head-spinning play Cloud 9, actor Evan Buliung has to remember whether he’s wearing the white Victorian gown with corset and heels or the far less flashy male gardener’s garb.

In Cloud 9’s first act, Buliung plays Betty, wed to the protective Clive in colonial Africa. In the second, he’s Edward, Betty’s gay son the action moves ahead a century to 1970s London, though the characters have aged only 25 years.

“I have to get used to the heels,” laughs Buliung, “but on one level it’s not very different from the costume I wore as Aragorn in the musical version of The Lord Of The Rings.”

The dress, though, is another matter.

“The corset almost bursts through the see-through material, which I think has to do with Betty’s desire to have the freedom of the men in her world.”

That first act is a send-up of patriarchal attitudes, especially toward women and indigenous people. Churchill looks at various sorts of colonization at the hands of a patronizing white male culture. She spoofs it by casting men as women and vice versa, and by having a white male play an African native.

“From the start of the play, Betty says that Clive is her life. She buys right into the female duties of the day,” says Buliung, whose recent Stratford and Shaw roles include Petruchio in The Taming Of The Shrew and Dick Dudgeon in The Devil’s Disciple.

“Still, Betty wants more than that and is attracted to the rugged explorer Harry Bagley, but her training convinces her that her feelings are wicked.

The first act, not surprisingly, is dominated by male characters like Clive and Harry who indulge in their own sexual desires.

Clive’s having it off with a neighbour, Mrs. Saunders, and Harry romps with other men, including the African Joshua and the young Edward, played by Ann-Marie MacDonald. MacDonald plays Betty in the second act.

“Ann-Marie and I read the other’s parts to each other early on so we could see the arc Betty travels during the play. It also gave us a chance to discover vocal similarities and the character’s emotional through-line.”

For Buliung, changing from Betty to Edward doesn’t mean changing everything about his performance we’re supposed to see a clear connection between mother and son. Among other things, they share an internalized guilt for not being what society expects of them.

“There’s a definite femininity to Edward, a diva quality that he usurps from his mother. I think Betty would be considered a gay icon today, a woman blessed with beauty, grace and style.”

Edward, on the other hand, doesn’t want to be male – either as a boy or a grown-up.

“He rejects so much that society considers masculine,” says Buliung. “Watching his mother and learning from her how to be a self-sacrificing partner, he takes the traditional husband-and-wife equation into his relationship with his frustrated lover, Gerry.”

Cloud 9’s second act empowers the female and queer characters, and Churchill includes lots of comedy as part of her discussion of sexual politics.

“But we have to be careful how to play the laughs,” admits Buliung. “If we go for too much wacka-wacka, the material doesn’t land firmly. We have to bring real intention and integrity to it.

“It’d be wrong to do this as panto. Instead, I feel like I’m channelling Kate Winslet when I play Betty.”