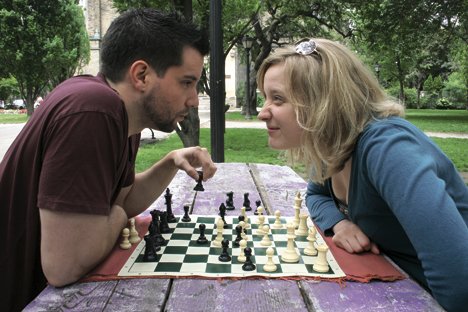 A suburban kid brought up on TV and sports, actor Brandon McGibbon learned theatre’s impact, how it can show us something new about our world.[rssbreak]

“I spent a lot of my early theatre years performing classical theatre, but then I came to a place, largely through George F. Walker’s works, where I saw my own background reflected on the stage.”

Todd’s story is only half the play. The other part, whose characters also touch Todd’s narrative, deals with gay lovers who want to wed, but an openly gay Catholic justice of the peace refuses to perform the ceremony.

“Michael’s taken his inspiration from the Canadian Charter Of Rights And Freedoms, and wants to talk about what the Charter means today, how it affects us all,” says McGibbon, who’s been seen most recently in The Sicilian and The Boys In The Photograph.

“Canada is a generous country, one that opens its arms to people” – McGibbon makes an all-inclusive gesture – “and invites them in, giving them rights and a place in our society. That’s amazing, but what happens sometimes is that people take their rights and make them into rules, which they use as a club to fight other people’s rules.”

The Canadian-born Todd takes the rights he has for granted.

“He’s not malicious, but he relies on those rights and, without knowing it, uses them in order to bully George, who’s recently arrived from Somalia.

“Todd lacks confidence because he’s at the bottom of the socio-economic ladder. The philosophy he devises is based on his constant phrase ‘What the fuck,’ a coping mechanism that allows him to coast along by relying on his wife, Tammy and not worrying about a job.”

McGibbon is probably most excited by the fact that Todd narrates his own story.

“I love articulate, eloquent characters, but it’s even more fascinating to portray someone who isn’t so expressive. Michael takes a figure like Todd, who’s often on the sidelines of a play, and puts him centre stage.”