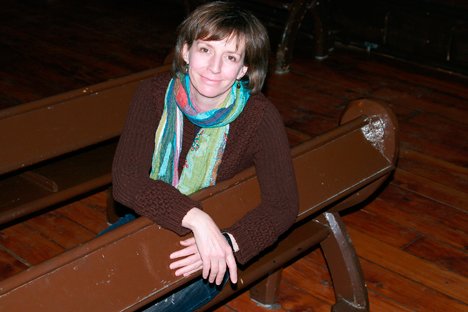 PEER GYNT by Henrik Ibsen, adapted by director Erika Batdorf and the company, with Susan Coyne and Matthew Romantini. Presented by the Thistle Project at the Church of the Holy Trinity (10 Trinity Square, next to the Eaton Centre). Previews tonight (Thursday, January 28), opens Friday (January 29) and runs to February 21, Thursday-Sunday, 8 pm. $25, preview and Sunday pwyc. totix.ca. See listing.

Susan Coyne is surprised to find herself in a production of Henrik Ibsen’s Peer Gynt, about an ambitious, storytelling rascal who has adventures involving trolls, desert tribes and businessmen before returning to his true love, Solveig.[rssbreak]

But Coyne was intrigued when the Thistle Project’s Matthew Romantini and Christine Horne and director Erika Batdorf approached her, offering her the chance to adapt the play with them.

And to play Peer Gynt.

“It wasn’t a dream of mine to perform Peer,” says Coyne with a bright smile. “But the others so fascinated me with their ideas about the play that I joined them.”

The production is the first by the company since 2006’s wonderful Gorey Story and promises to be just as fascinating.

They’ve created a two-hander, with the elastic Romantini playing everyone but Peer in the picaresque, rambling tale. The venue is the Church of the Holy Trinity, a historic and progressive house of worship proudly displaying a rainbow flag and banners for diversity and social justice.

“She sees it as a pilgrim’s progress, an everyman’s journey about the carnal Peer, who has to learn about his own soul.

“It’s a modern tale, too,” she continues. “The sex of the title character somehow doesn’t matter. There’s more of a problem today in portraying Solveig, who sings and spins in her hut for decades, waiting for Peer to return.

“Turning the play this way – with me as Peer and Matthew as Solveig – gives it a different view, and makes Solveig something more than a patient woman. The pair become animus and anima for each other.”

Asked to describe Peer, Coyne ticks off the stages of his life: he is in turn a dreamer, a successful businessman, a prophet, a scholar and an old man who’s lost everything.

“We’ve kept all those elements of this Christmas pudding of a play, always exploring the idea of being true to oneself, which Peer maintains he is. I’ve been thinking about what it means to have integrity and also to be completely selfish. There’s the danger of becoming a monster if you have no responsibility for others.”

Coyne, a founding member of Soulpepper, hasn’t been onstage in several years, instead concentrating on writing and story editing for film and TV.

One of the co-creators of the Gemini Award-winning Slings And Arrows, she also adapted Chekhov’s Three Sisters and has been working on film projects with actor Martha Burns.

“I love getting back into the pressure-cooker situation of performing in a play, especially in a work as physical as this,” she says.

“The church is like an upside-down boat, and both we and the audience move around the space. There’s live music, and because we can’t hang lights, the crew moves them around from scene to scene.”

Coyne likens the experience to playing around as children.

“We’ll do one part in a corner, then use the pulpit, then move benches to make a house,” she says. “The style fits the spirit of the play, which resembles story theatre that begins, ‘Once upon a time there was a boy who was a dreamer.’

“But we’re not allowed to forget that the story also has a dark melancholy and the occasional satiric note.”