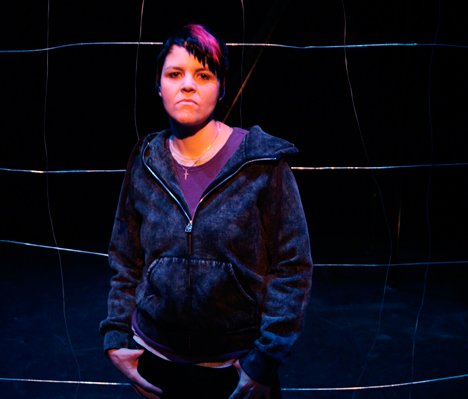 Playwright Judith Thompson’s expert at using monologues to delve into the human soul.

Her last play, the award-winning Palace Of The End, was a trio of monologues that explored various aspects of the war in Iraq. Her latest, Such Creatures, relies on the same form to look at a pair of cataclysmic teen experiences, one in 1940s Auschwitz and the other in today’s Toronto.

While Auschwitz survivor Sorele (Maria Vacratsis) looks back at her history in retrospect, Blandy (Michaela Washburn) lives in the present: she awaits a beating — or worse — at the hands of a gang of girls she’s dissed.

“Blandy’s a 15-year-old on the edge of being a real shit,” says Washburn, who most recently appeared in Native Earth’s Salt Baby, “good at heart but someone who’s had a crap life. With no decent role models, she has nothing to hold onto, almost no one to help her onto a better path.”

The exception is a teacher who casts her in a school production of Hamlet.

“Blandy’s smart, and her arc in the play is a journey about changing her situation. First, though, she has to confront this group of girls. Surprisingly, it’s her connection to Shakespeare that will help her move in a new direction.”

Washburn has been involved with the script since 2007, when Blandy was the play’s sole character. Thompson later added Sorele as a parallel figure who, like Blandy, discovers a different world view because of the Bard.

“Shakespeare’s words are timeless the truth of his stories and how he captures the human condition are relevant as much in 1945 and 2010 as they were 400 years ago. Hamlet, The Tempest and The Merchant Of Venice offer strength to Sorele and Blandy, allowing them to deal with a threatening world.”

To prepare for her role, Washburn spoke with teens and watched how they interacted in malls and on the subway. She also programmed her iPod with the music that Blandy might listen to and watched the film Precious, “which had a profound effect on my choices and taught me not to be sentimental with this character.

“Often teens send out the vibe ‘I want you to feel bad for me, give me some sympathy, cut me a break.’ Blandy’s attitude is ‘don’t pity me these are the facts of my life.'”

Washburn admits she couldn’t have tapped into Blandy so deeply without Thompson’s words to guide her.

“It’s the text that reveals the emotion and takes you where you need to be as a performer. In Judith’s hands, just telling the story is significant. Her rhythms are key, and if you trust and surrender to them, they reveal the most beautiful music.

“Judith invites us to listen to these two women, but to listen in an active way. She makes no assumptions about the pair everyone, she suggests, has a story worth listening to, and we often don’t know what someone lives through and battles every day.”

Though the two characters live in different worlds, their thoughts intertwine over the course of the show.

“They share a courage and determination that what’s happening to them won’t happen any more. What Blandy and Sorele learn is that while anger can motivate our lives, it facilitates both inner and outer chaos. They each look for a way to transcend that anger.”