Priscilla, Queen of the Desert comes to Toronto – finally 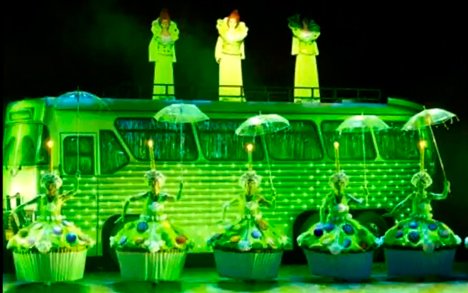 Recently I did something I’ve never done before: I saw three Mirvish productions in one week.

Too bad the touring version of Fiddler On The Roof (running to January 10) was tepid, and some performances in the long-running The Sound Of Music (extended yet again to January 10) have grown tired. But it great to see a hit in the expanded, Fringe-born My Mother’s Lesbian Jewish Wiccan Wedding, closing January 3 but returning February 26.

I don’t remember a time when David Mirvish had such a busy season as this one, and there’s more to come – nine more shows (not counting the return of My Mother’s) between January and August.

Must admit I’m looking forward to some more than others, especially Caryl Churchill’s cross-gendered Cloud 9, featuring a first-rate Canadian cast directed by Alisa Palmer, and the concert featuring Patti Lupone and Mandy Patinkin.

But what I’m really primed for is the stage version of Priscilla, Queen Of The Desert, based on the campy 1994 film about two drag queens and a transsexual who travel across Australia in the titular pink bus to perform a gig. After a postponement or two, the show’s finally coming to Toronto.

I saw the London version last summer and loved it. An exuberant, over-the-top, engaging production that outdoes the film version in terms of outrageousness, the production provided one my most fun evenings in the theatre.

Mirvish is one of the producers of the British version, so I thought it strange that he’d postponed the Canadian version. Maybe the postponement had to do with the overt raunchiness of the show balanced against the perceived conservatism of Mirvish subscribers. There was even a rumour a while ago that the show wasn’t going to happen at all.

But the content didn’t stop the all-ages and all-sexes audience of every orientation at London’s Palace Theatre from eating it up. Even the cast was enjoying themselves in the demanding show, which had more costumes changes than the hairs in a drag queen’s false eyelashes.

I wish the Priscilla we’ll see at the start of the 2010-2011 Mirvish season were the all-Canadian production mentioned when the show was first announced. Now, apparently, it’s a co-production that will end up on Broadway. Of course, that doesn’t mean that Canadians won’t be part of the show – hope they are – but I think back to Mirvish productions like Les Miserables and Crazy For You, which featured all (or nearly all) Canadian casts.

Priscilla uses the technique we’ve seen in works like Mamma Mia! and the upcoming 80s musical Rock Of Ages, which inserts established songs into the story to comment on narrative and characters. Sometimes it’s done brilliantly, as when the bisexual drag queen Tick, aka Mitzi (Jason Donovan), sings Both Sides Now, when straight mechanic Bob (Clive Carter) and transsexual Bernadette (Tony Sheldon) harmonize with A Fine Romance as they begin an unexpected relationship or the first-act finale, I Will Survive.

Then there are the three divas, who literally fly in to perform high-energy numbers like Downtown and MacArthur Park.

Just as important as the spectacle for me is the truth of the characters’ emotions, realized best in Sheldon’s Bernadette, who can toss bitchy lines with the best but also show vulnerability. Terence Stamp was terrific in the film, but Sheldon turned Stamp’s sometimes icy hauteur into self-deprecating warmth.

And if you’ve seen the film, you can’t forget the scene where Adam, stage name Felicia, camps it up singing opera while ensconced in a high-heeled shoe on top of the moving bus, her costume flying in the wind. In the London version, Oliver Thornton – sexy as can be – made as strong an impression warbling Sempre libera from La Traviata…and it didn’t hurt that the shoe juts out over the audience for the number.

If you thought the film had some extraordinary costumes, wait for the stage version. Same designers – the Oscar-winning team of Tim Chappel and Lizzy Gardiner – and they go even further. I’ll never forget the MacArthur Park number, where the chorus spins around as green cupcakes, candles on their heads, holding see-through umbrellas…remember, “someone left a cake out in the rain.”