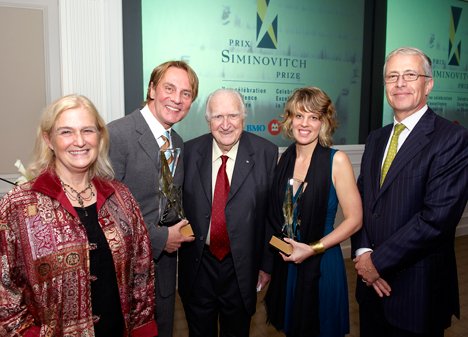 For years audiences and critics around the world have acknowledged the skill with which Ronnie Burkett manipulates the dozens of characters that populate his shows.

Now he’s received a design award for the puppets themselves: the 2009 Siminovitch Prize in Theatre, which cycles annually from director to playwright to designer. The $100,000 award – the largest theatre award in Canada – gives $75,000 to the recipient and another $25,000 to the recipient’s protégé.

Burkett’s protégé is Montreal-based Clea Minaker, who has worked in theatre, film and music she toured internationally with Feist, designing and performing live shadow puppetry and video projections at concerts.

I first saw Burkett’s work at an early World Stage festival in the 80s. The show wasn’t his, in fact, but rather a One Yellow Rabbit work called Tears of A Dinosaur, and he’d built the dinosaur of the title. It was a treat.

Entranced with his work, I caught all of his shows I could: Fool’s Edge, which was a riff on commedia dell’arte The Punch Club (Punch and Judy) Awful Manors (gothic romance) Old Friends (his only show for children). Funny, sometimes raunchy, always clever, his puppets were beautifully crafted, fully realized.

That didn’t change when his work grew more serious in the Memory Dress Trilogy (Tinka’s New Dress, Street Of Blood, Happy) and later shows such as Provenance and 10 Days On Earth.

I remember being in Burkett’s Calgary studio back in 2000, while he was working on Happy before its Toronto premiere. I felt like I’d stepped into God’s workshop just before the first day of creation: tiny body parts, bits of costumes and other elements that would come together into his wonderful creations were laid out on tables all over the place. (Puppets don’t usually change costumes very easily Burkett and his associates often have to make several versions of the same character.)

Now maybe some theatre in Toronto will program Burkett’s current show, Billy Twinkle: Requiem For A Golden Boy, which has been touring Canada and internationally. Canadian Stage, which presented his other recent shows, surprisingly didn’t pick up on Billy Twinkle when it premiered.

That’s been Toronto’s loss. Come on, we deserve to see this amazing artist’s latest work.