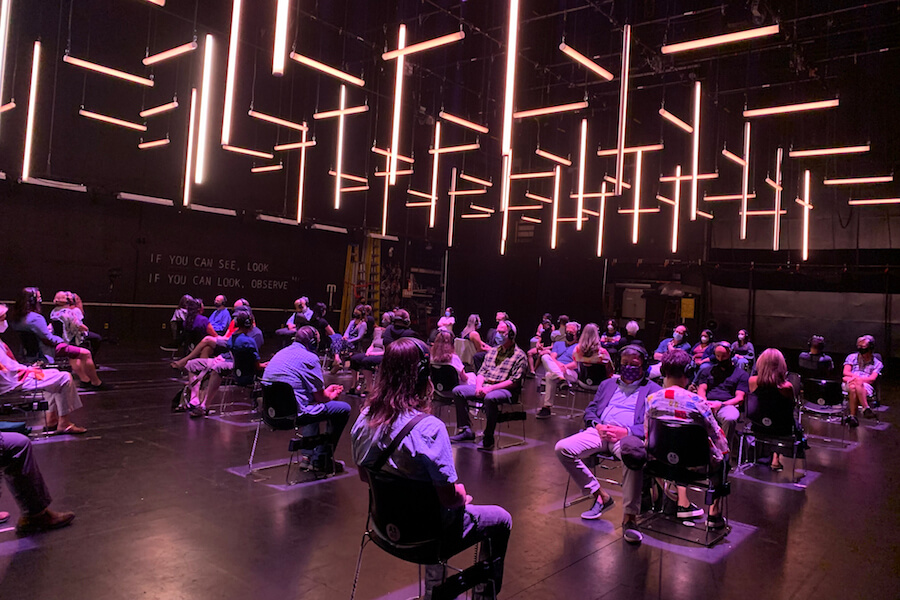 Blindness is a disturbing and timely examination of societal chaos during an epidemic. Sound familiar?

The physically distanced sound installation adaptation of José Saramago’s dystopic novel was supposed to have opened at the Princess of Wales Theatre last November. But after the second (or was it the third?) wave of the pandemic closed things down, the show was postponed.

Now Blindness has become the first large-scale show to take place inside a Toronto theatre in 16 months. With the end of the pandemic almost in sight, the show’s presentation and themes resonate more than ever. It was worth the wait.

Not that this is traditional theatre, mind you. Led into the space row by row to avoid crowding, audience members sit alone or in pairs on the stage. There’s more than enough room between people to feel safe, and masks are mandatory.

On each chair is a pair of headphones. Make sure you adjust the volume appropriately, because Ben and Max Ringham’s sound design is one of the production’s strongest aspects. Overhead is a complex lighting grid (the designer is Jessica Hung Han Yun). You can’t control the lighting, but it will sometimes subtly and sometimes boldly change throughout the next 75 minutes. There is frequently complete darkness. (Note: patrons needing to leave can raise their hands and a stage hand wearing infrared glasses will lead them out.)

Set in an unnamed city, the work depicts what happens when an illness causes people to mysteriously lose their sight. Simon Stephens (The Curious Incident Of The Dog In The Night-Time, Punk Rock) has condensed Saramago’s epic novel into a monologue for one actor (Juliet Stevenson). At first, Stevenson plays an omniscient narrator who introduces us to the various characters and their dilemmas. And then, as the blindness epidemic worsens and the government begins limiting people’s freedoms, she lets us experience the horrific events through the perspective of a single character, called the Doctor’s wife.

I use the word “horrific” and mention patrons needing to leave for a reason. After the rather cool, detached reading of the first eight or 10 minutes – the only time Blindness feels like a glorified audiobook reading – you’re soon immersed in a nightmare world where the rules are constantly changing, reliable information is scarce and violence and disagreements erupt on the sidelines. (Again: sound familiar?)

The sound mix is so effective that you’ll swear the Doctor’s wife is whispering right in your ear, or that if you reach out a hand you’ll be able to touch her as she anxiously flits by.

At about the midway point, Stephens cleverly fills in a bit of backstory that gives you a sense of what’s going on in the play’s outside world. And soon the characters are faced with big decisions about how to survive (food, of course, is a major concern), how to bury their dead and, if possible, how to escape where they’re being held.

Meanwhile, the Doctor’s wife, like all lead characters in a dystopia, is pushed way beyond her comfort zone.

Stevenson deserves some kind of special acting award for her performance, which suggests the narrator’s growing unease but also her warmth, resilience and bloodthirsty anger. Nothing prepared me for the way, in a climactic moment, she calls out her oppressors with a single word, repeated several times.

For such a nerve-shredding experience, Blindness has a thoughtful, almost philosophical final few moments, in which Saramago and Stephens address questions about how society will continue after a huge crisis. It’s at this point that the space itself takes on a significance that is moving yet never sentimental.

Don’t be surprised if, like me, you find yourself tearing up a bit thinking about the future – of both the art form you’re experiencing and the world itself.

October 1, 2021: This post was updated with the show’s extended run dates.