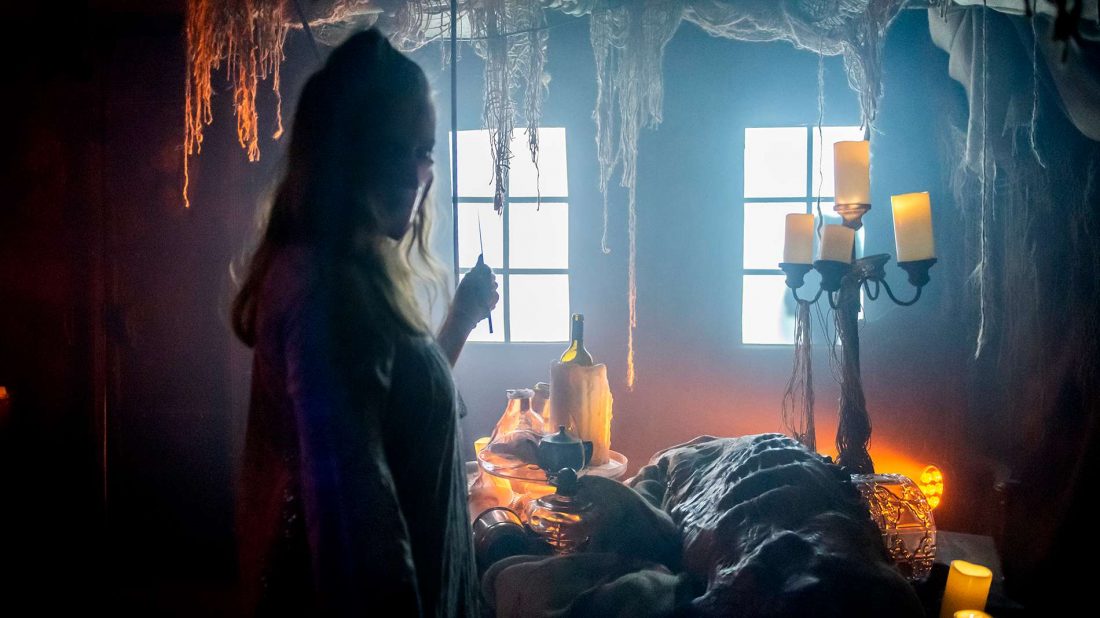 There’s a reason why so many horror movies and books are set in and around creepy old castles. Walking by those hidden chambers, endless corridors and creaking, winding staircases can fill you with a sense of dread, doom and foreboding.

The Halloween show Legends Of Horror – back this year in a physically-distanced version – offers up plenty of that. The entrance to the fright fest is at the southwestern foot of the Casa Loma grounds. Mounting the rocky staircase, trees strewn with cobwebs and creepy crawlies, sounds of screams mysteriously coming from somewhere, it’s easy to imagine you’re entering the lair of a Count Dracula or a Victor Frankenstein.

In fact, both old-school figures pop up in this stunningly designed house of horrors. But, as with any good horror experience, you don’t know when they’ll appear. Around the corner? As a reflection through a window? Or maybe from that nearby coffin that’s shaking and ready to crack open?

As with any such walk, there’s a mix of live performers and life-sized – and in some cases over-sized – creatures. What’s surprising is many of those animatronic creatures are just as frightening as the living, breathing ones, especially when they’ve been rigged effectively to jump out at you.

One of the best ways to create fear is disorientation, and within 10 minutes you’ll have no idea where you are in relation to the castle itself. Shortly after climbing that first staircase, it seemed like I was climbing another one, and for a moment I wondered: Am I back at the beginning? Another section is sure to disorient you and make you feel trapped; it doesn’t help that the hideous villain from a particular Stephen King novel might be on your tail.

New this year is a Glass Pavilion that acts as a bar and lounge area – in case you need some liquid courage before continuing on. This exits onto a landing and an effective view of the castle wall, which is lit up with ghostly projections. But don’t think you can simply relax in this courtyard. There are plenty of creatures that can sniff you out and decide to follow you. At one point, I half-jokingly pleaded to one: “Please, I’m not as tasty as a hobbit.”

The second part of the walk is even more effective, because it takes place in the tunnels below Casa Loma, and you can feel the weight of history pressing up against you and practically oozing out of the walls. The production design of the entire show is impeccable, but the details in this section are amazing, from antique chandeliers to old-school horse stables which have a, ahem, different use in this setting.

The creators know that fear arises from little things – a beam of light that shows rats scuttling across a mantel; an innocuous photo that, if you stare at it long enough, presents a ghoulish surprise; a scalpel-wielding doctor who, just for a second, looks at you as if you’re going to be his next victim.

This is a classier fright show than many I’ve experienced; it’s more Edgar Allan Poe and H.P. Lovecraft than Eli Roth. And it’s a perfect way to kick off October.