Review: MixTape is a marvellous show full of sound and fury

The multitalented Zorana Sadiq has put together a rich, honest and complex playlist inspired by her eclectic life and career 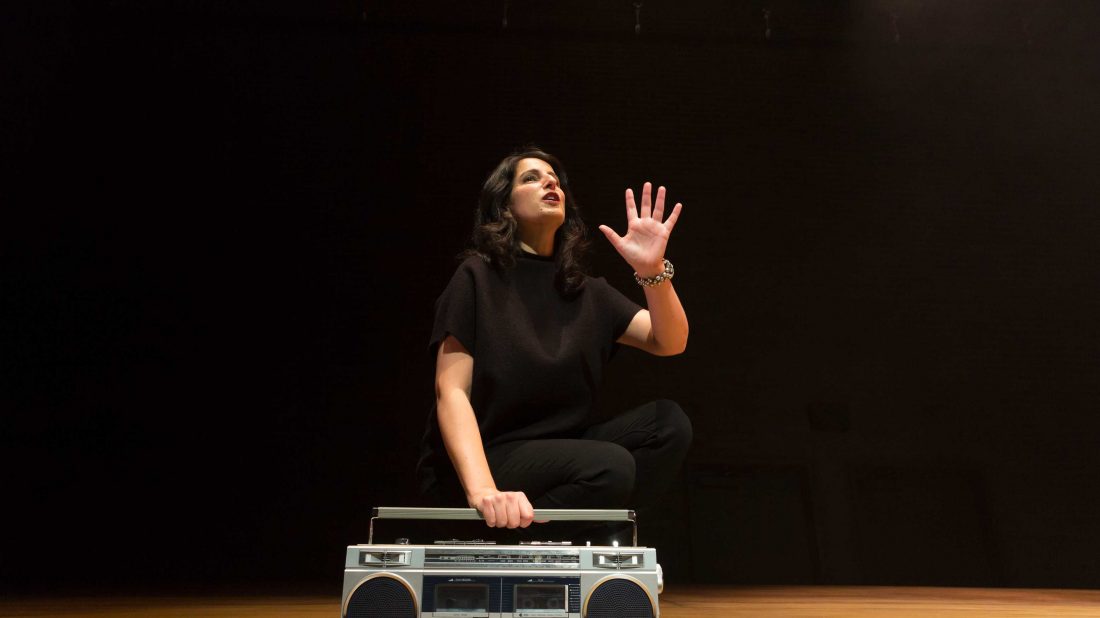 Even if, like me, you’ve watched enough solo shows to last you a lifetime, you’ve likely never seen – or heard – a story like Zorana Sadiq’s Mixtape. In her marvellous new show, the multi-talented artist uses the concept of a curated playlist to chronicle some key sounds in her life.

Sadiq’s professional resume is all over the map and includes theatre, TV, contemporary music, teaching and opera. (When she made NOW’s list of the Top 10 theatre artists of 2019 it was because of her fine work in a documentary theatre piece, a musical and a SummerWorks show.)

That kind of eclecticism is reflected in the show itself, where stories of playing the flute in the school band are followed by childhood memories of listening to Neil Diamond, Leonard Cohen and Barbra Streisand (her parents’ albums) and, later on, George Michael, Kate Bush and Prince (her own albums) and, even later on, Sondheim, Verdi and Messiaen.

As she gets older, she joins musicals and eventually begins classical training. Meanwhile, there’s her fraught family life to deal with. Her Pakistan-born parents continually argue; Zorana and her domineering mother clash. Sadiq’s description of her mother’s haughty comeback to a racist remark is very telling. And sound designer/live sound operator Thomas Ryder Payne’s recreation of two parents’ muffled fighting in another room is eerily effective.

Sadiq is as strong a writer as she is an actor and singer. Early on, she mentions “a kind of obsession sliding into place,” a beautifully apt phrase. Commenting on a guitar concerto, she finds words to make us see what we’re hearing. And just as she points out how the silence between tracks on a mixtape can be important, she punctuates her story with little bits about her parents that create their own space around them.

Under Chris Abraham’s direction, the show feels organic and fluid; there’s nothing regimented or predictable about it. The wooden floor in Julie Fox’s minimal set almost resembles the inside of a piano or the soundboard of an old acoustic guitar. And it’s beautifully lit by Arun Srinivasan, who does some playful things with spotlights – fitting, since the show frequently addresses the idea of performance itself.

Sadiq frequently solicits feedback from the audience, and she’s a genial and generous host. Like all true artists, she’s carefully chosen what to include and what to leave out. (This is a mixtape, after all.) The result is a rich, honest and complex portrait of a maturing, growing artist, someone carefully attuned to the sound and fury around her – and inside her.